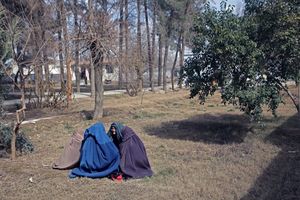 Eliza Griswold is the 2015 recipient of the PEN Poetry in Translation Award, for a book-length translation of poetry into English published in 2014. I Am the Beggar of the World: Landays from Contemporary Afghanistan is translated from the Pashto and published by Farrar, Straus and Giroux.

Eliza Griswold: I came to this book through a collaboration with my friend the inimitable photographer Seamus Murphy, who has worked in Afghanistan for nearly three decades. For years we’ve been looking for a way to work together on a project about the dark humor embedded in Afghan life. One day Seamus discovered an older collection of landays, titled Songs of Love and Suicide, which were gathered from Pashtun refugee women, most of them from Afghanistan and living in exile in Pakistan. Sayd Majrouh, an Afghan freedom fighter and poet who was eventually killed in the early nineties by Gulbuddin Hekmatyar, collected these poems. We thought it would be a remarkable project to look at the impact that more than a decade of U.S. occupation had had on the lives and songs of Afghans, especially women, through these two-line folk poems. We wanted to do this as international attention on Afghanistan wavered along with the pullout of international forces. The point is: Here are some of the singular people and voices we’re leaving behind, and of course the larger question becomes, What will happen to them?

Griswold: First, I don’t speak Pashto, so that makes translation a challenge. [laughs] Of course there’s a long history of poets attempting translations of languages that they don’t speak through working from transliterations, and that’s essentially how the process worked. I’d gather the poems in Pashto along with a series of native speakers—mostly two young women, Asma Safi and a woman I’ll just call Z.—who were culturally appropriate to speak to the women I needed to interview and record. They created literals of the poems, most about nine words long. Then, from those literals, I sat for days and weeks with a larger collection of poets and intellectuals and others to puzzle out what the landays really meant and how best they could be rendered in English. Since the poems come from an oral, folk culture, they’re not considered high art. Nor is the question of authorship relevant. Both of these factors allowed me to approach the daunting task of gathering these and translating them. I do read some Arabic, meaning only that I can sound out words badly, very badly. This can be extremely irritating if one is traveling with me in a car in an Arabic-speaking country, as I like to puzzle out street and shop signs. It sounds like this: “CoooCaaaCooLaaah!—Coca Cola!” Pashto employs Arabic characters, and some words overlap, which meant that I could read and discern the basics during the six months or so of translation. Words like jang (“war”), meena (“love”), watan (“homeland”), biltoon (“separation”), or gham (“despair” or “suffering,” particularly that of a Pashtun woman) became easily discernible.

The most challenging aspect was trying to find the space of doubleness—where the landay is more than the sum of its initial declaration—and render that into English.

Griswold: I’ve never done any meaningful translation in the past, but for my next project I’m hoping to collect landays among Pashtuns in Pakistan.

Griswold: Hm, that’s a hard one. I don’t typically say that I was pregnant when I traveled to Afghanistan to do this project with Seamus. It’s largely irrelevant to the work, but frankly that was probably the hardest thing about it: vomiting on the street and keeping going and the like. Let’s just say that Seamus put up with a lot.