In uncertain times, it can be comforting to honor the rituals that have nourished and grounded us over the years. And with so many people cooking at home these days, we thought we’d ask some of the writers in our communities to share favorite recipes and the stories behind them. We hope these recipes provide you with some inspiration, comfort, and company in your own home kitchen. If you’re a writer who cooks and would like to be featured in our series, please reach out to [email protected].

Today’s recipe comes from Jehan Nizar, a writer and food blogger based in Chennai, India. 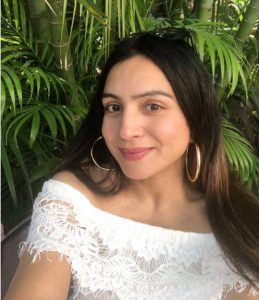 “So when do you add the tomatoes?” This is the question I find myself asking my mother over a Skype call, adopting a measured air of nonchalance that both of us know I am incapable of possessing. An awkward silence hangs over us. For a minute, I feel like a probing stranger, eager to rifle through the most intimate details of a devoted homemaker’s domestic repository.

These are the intercontinental kitchen confidences that have traditionally bound new Indian wives to their mothers in a thread of eternal gratitude. They comprise the inherited recipes that have been ambitiously attempted over the years with the hopes of eliciting tentative requests for repeats from husbands who start off as no more than strangers. They are a testament to the remnants of fiercely-guarded family culinary legacies that many, like my mum, believe their husbands are none the wiser for. Tomatoes, in the case of my mother’s recipe for rice-and-meat layered biryani, (literally) are the disguised bones of contention that are testimony to the fact that in India, there is no such thing as a definitive version of a dish.

The act of assembling an industrial-sized, wide-mouthed chembe of biryani is not as daunting as it is ceremonial. Unlike purists in my family who consider the Malabar biryani—which has, in several ways, put the food of our community and its borrowed Arab trading influences on the map—the most superior form of the dish, I’m more easygoing in my preferences. That being said, I have long been aware of the divisive biryani ideologies that exist at loggerheads, even within the maternal and paternal branches of my own family.

There are, however, certain universal principles that I discovered still reign supreme when I constructed my first grown-up pot for Eid this year. Living in isolation in the southern Indian city of Chennai for about three months of lockdown has taken a toll on me. Cooking has lent purpose to my days and a rhythm that punctuates the silences in an otherwise uncomfortably quiet apartment. While I have come to seek the reassuring hiss of my solid Prestige pressure cooker and the smells of weeknight traybake dinners wafting from my perfect-for-one tabletop oven, it’s hard to regard food as a celebration in these unsettling times.

On the eve of Eid, I talked to my mother about the frivolity of making what has traditionally been a communally-enjoyed festive dish. My apprehensions were quickly thwarted, and I found myself being arm-twisted into doing what is expected of any good member of the Mappila community.

With every pot of biryani that is made, arguments abound. Unlike others who hail from the same region of Kerala as us, both sides of the family have a particular disdain for dried fruit, nuts, and other trimmings that distract from a perfectly-attained meat-to-rice ratio.

I slice onions wafer-thin, with a precision I hope is not lost on my mother, who watches critically while guiding me. There is no question of stinting or adulterating when it comes to the ghee bath in which my alliums are caramelized. The spicing is delicate, and I am told to use “no more than a sprinkling” of our secret home blend of garam masala. The holy trinity of green chilies, cilantro, and mint gives the dish its distinctive greenish-brown hue.

Biryani for me is the smell of home and the scent of attar being delicately dabbed on wrists in anticipation of the Friday Jummah prayers and the subsequent meal we will sit down to as a family. In the years to come, it will be the sound of my mother’s voice filling up kitchens she may never completely be acquainted with, while peering into a pot through a phone screen.

Biryani will come to be synonymous with the air of indecision that smothers me as I stand sweaty-faced over a hot stove, uncertain as to whether I should execute what my mother considers her ultimate stealthy move—fishing out the rogue tomato skins that have served their purpose of imparting a subtle note of tartness, without offending my father’s biryani sensibilities.

I share this recipe with a caveat: It is not the singular authority on Mappila biryani, but the variation my mother learned and tweaked so as to hover over a comfortable marital middle ground. 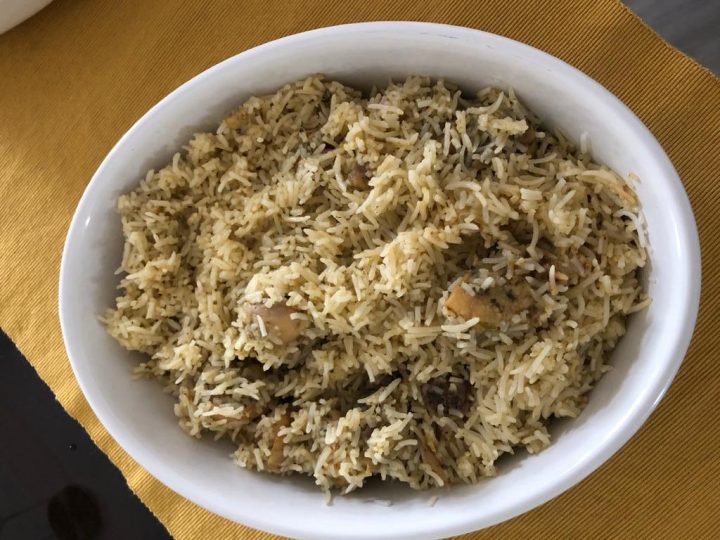 For the chicken masala:

Instructions:
1. Heat a thick-bottomed pot/kadai. Add ghee and allow it to warm for 3–4 minutes.
2. Add the sliced onions and sauté on a low flame until translucent.
3. Add the ginger-garlic paste and sauté until the raw smell disappears.
4. Add ground green chilies and sauté.
5. Add the tomatoes, yogurt, pinch of turmeric powder, and the cilantro and mint leaves. Stir well and allow the mixture to come to a simmer.
6. Add the chicken pieces and season with salt.
7. Seal with a lid and allow to cook until the chicken is tender and the gravy has reduced to a thick consistency. My mother would, at this stage, carefully extract the tomato skins, but this is optional.
8. Add the lemon juice and garam masala and give a quick stir. Sprinkle a few chopped cilantro leaves and turn off the heat.

Ingredients:
1/4 cup ghee
100 g onions (thinly sliced; these will be used for the dum)
Salt (to taste)
Boiling water (usual measure is 2 cups water for 1 cup rice)
1 kg biryani rice (traditionally short-grain Jeerakasala, but a good quality long-grained variety such as basmati is also good), washed a few times until the water runs clear, left aside to drain completely in a colander

Instructions:
1. Heat a thick-bottomed pot/kadai and pour ghee into it. Allow it to warm for 3–4 minutes. Add the onions and fry until crisp and golden brown. Remove the fried onions from ghee and set aside to drain on a plate lined with kitchen paper. The fried onions will later be used for the dum. Make sure to remove any stray brown onion bits from the ghee, as these will lend a pungent note. If you feel like this isn’t possible, drain the used ghee and start afresh for the next step.
2. Add washed and drained rice to the remaining ghee bath and sauté well until you can hear a satisfying light crackle.
3. Add a slight pinch of salt and pour boiling water into the pot. Turn up the flame and bring to a boil. Reduce the flame slightly, seal the pot with its lid, and cook for 8–10 minutes until the rice is cooked thoroughly and the water has dissolved. Remove from the flame.

For the dum (steaming) step:

Instructions:
1. Remove half of the chicken masala from the first thick-bottomed pot and set aside in a dish. Spread half of the cooked rice neatly over the remaining chicken masala in the pot (as you would while layering lasagna). Sprinkle with some garam masala and half of the fried onion mixture mentioned above.
2. Add the remaining chicken masala and spread to create a third layer. Sprinkle with garam masala and fried onions. Move on to create a fourth rice layer, topped with fried onions, garam masala, and a sprinkling of finely chopped cilantro leaves.
3. Seal the pot with its lid. Keep the flame on a very low setting and create the dum effect by steaming in this manner for a minimum of 15 minutes. Switch off the flame and keep the pot aside and covered for 20 minutes.
4. To serve, unseal the pot and mix the layers together from the bottom of the pan to the top, ensuring that you don’t break individual grains of rice while doing so. The masala should be incorporated thoroughly into the rice.
5. Garnish with fried onions and serve warm.

Jehan Nizar is an independent features writer and food blogger based in Chennai, India. Her work has appeared in national and international publications including The Wire, Firstpost, The Spruce Eats, and Gulf News. She also writes fiction, and is currently seeking an agent for her collection of short stories, The Pool House.

PEN America's @JRTtager spoke with @newstalkfm about our latest report "Made in Hollywood, Censored by Beijing," which examines the ways in which Beijing’s censors have affected and influenced Hollywood and the global filmmaking industry. Listen here: https://bit.ly/32cY12D.

We call for Hanna's immediate release, as well as the release of two other PEN Belarus members and staff. https://pen.org/press-release/pen-america-calls-for-the-immediate-release-of-pen-belarus-members/

Looking forward to this session. Join me and @womenjournos to talk shop about how to prepare, respond, take care of yourself, and offer support when dealing with abuse online. https://twitter.com/womenjournos/status/1303445529804918795