In uncertain times, it can be comforting to honor the rituals that have nourished and grounded us over the years. And with so many people cooking at home these days, we thought we’d ask some of the writers in our communities to share favorite recipes and the stories behind them. We hope these recipes provide you with some inspiration, comfort, and company in your own home kitchen. If you’re a writer who cooks and would like to be featured in our series, please reach out to mfranke@pen.org. 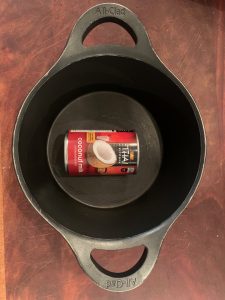 As the author writes, not the most photogenic soup. Photo by James Sie

I won’t lie. I’ve been finding it very hard to write these days. My brain can’t seem to hold a thought with enough quiet space around it to blossom into a well-ordered sentence. The air is thick with alarm, or despair, or contagion, or fatigue. I’ve gone from code-red, sleep-depriving distress—was that cough, THE cough?—into a numbing routine of cleaning and sanitizing and masking and quarantining. And now the world has erupted again, in anguish and rage. How to start a new project, when the country is stumbling into the first chapter of a Cormac McCarthy novel? How could anything I write compare to the sheer magnitude of the events of the day?

And yet, just like those reproducing Jurassic Park dinosaurs, creativity will find a way. This has come for me mostly in the form of cooking. Literary brain space has given way to culinary flexing. My cooking has become steroidal—cakes, breads, braises, and soups; biga starter dough on the counter; zombie green onions sprouting in water on my windowsill. My Instagram feed has never seemed so tasty.

One of my favorite meals, though, is not photogenic. I call it stone soup, only in this case, the stone is replaced by coconut milk. Coconut milk is this magical elixir that makes any quick weekday (what is a weekday now?) soup, stew, or curry instantly better—richer, more filling, and tastier. It satisfies on many levels, since it’s fast, easy, endlessly adaptable, and completely comforting. Anything can go into this one-pot wonder: proteins, veggies, whatever is left in the community garden box at the end of the week (which gives you the added bonus of being virtuously frugal). I started making this with chickpeas and chard, based on a New York Times Cooking recipe, but nowadays, I have a certain reckless desire to rely more on my own intuition and whatever resources I have on hand. As long as you have that can of coconut milk, you will come out the other end with a meal. Promise.

Instructions:
1. Start with an equal amount of garlic and ginger (1-2 tablespoons of each) and chopped onion—I usually use a whole onion in anything I make, because onions are good—in an empty pot. If you end up only having half an onion, it’ll do. Sauté that holy trinity with any oil—coconut, olive, or canola. Don’t forget a pinch of salt; you’re already layering flavors. Let the onion soften, smell that magical aroma, and imagine what you’re going to create from that foundation.
2. Here’s where things get interesting. Which way are you going to go with this? For me, the coconut milk often points toward Asia. Craving something Indian-inspired? Add some curry paste, or turmeric and cardamom, or garam masala. More southeast Asian? Perhaps some smashed lemongrass stalks, and the makrut lime leaves you’ve stored in the freezer since 2015. Further east? Caramelize a few tablespoons of miso. I find cumin almost always makes me happy. Add some dried chili peppers for heat, or gojuchang. You can be somewhat aggressive with the seasoning, because coconut milk is so mild. There are a lot of websites that can point you toward traditional spice combinations, but these days, I’m just going by smell. I try to remember why I bought a particular spice in the first place, and then I think, “Do I want my meal to taste kinda like that?” Whichever way you go, as long as you don’t go too overboard on the mixing and matching, you’re gonna be fine, because of that coconut milk. Is any of this authentic? Probably not. But it’s authentically yours.
3. Add the coconut milk. Remember, it’s not coconut water, or coconut cream, but coconut milk. The one in the can. It instantly soaks up all those spices and unifies it, making the dish into a dish. Add about three cans-worth of another liquid: chicken stock, vegetable stock, even just water; and turn up the heat.
4. Now’s the time to add the stuff, the meat of it, though it doesn’t have to be meat. Make everything bite-sized. My favorite additions are cooked chickpeas and chunks of sweet potato, but what are you hankering for? Or what do you have in the fridge to use up? Leftover cubes of chicken breast? Some chunks of raw fish and/or clams? Cauliflower and peas? A few carrots and parsnips you were wondering what to do with, or that potato that has just started sprouting eyes? It’ll all taste good in here, though maybe, not all in one dish. Don’t overwhelm the dish. Learn to edit. Save something for the next pot. Raw root veggies will take longer to cook; seafood will only take minutes; but really, nothing’s gonna take too long, because it’s all in smaller pieces.
5. Once it comes to a gentle boil, reduce the heat and simmer until your ingredients are cooked/reheated and the liquid is a little thicker. Taste for salt and pepper. Now, at the end if you have a couple handfuls of shredded greens—spinach, chard, kale— throw them in. Bonus virtue points! Let them wilt.
6. Serve over rice (don’t forget to salt your rice before it cooks!), or with naan, on lentils, or let it ride as is. You can get fancy and squeeze some lime or lemon over each bowl, something to brighten the dish. Maybe a little fish sauce? A dollop of plain yogurt? If you have them, finish with a flourish of fresh chopped herbs like cilantro, parsley, dill, or basil.

There! You’ve done it. You’ve conjured up something that wasn’t there before, in less than an hour, and that something is good. It won’t be shortlisted for a Booker Prize, or chart on the New York Times Bestseller List, but, for tonight, it’s enough. You got creative. You made a thing.

James Sie is the author of Still Life Las Vegas, his debut novel, which was a Lambda Literary Award nominee for Best Gay Fiction. A PEN America mentor, he has also written literary adaptations that have been performed across the country and has contributed essays to The Rumpus and The Advocate. His upcoming YA novel, All Kinds of Other, will be published by Harper Teen next year.