In uncertain times, it can be comforting to honor the rituals that have nourished and grounded us over the years. And with so many people cooking at home these days, we thought we’d ask some of the writers in our communities to share favorite recipes and the stories behind them. We hope these recipes provide you with some inspiration, comfort, and company in your own home kitchen. If you’re a writer who cooks and would like to be featured in our series, please reach out to [email protected].

Today’s recipe comes from Steven Reigns, a poet and founder of The Gay Rub. 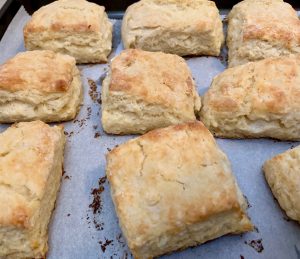 I became obsessed with making biscuits when quarantine began. Inspired by the buttery, flaky delight I’d experienced a month earlier in Seattle at Tom Douglas’s Serious Pie and Biscuit, I sifted my way through 45 pounds of flour. At one point, I made biscuits 16 mornings in a row, trying to capture what I consumed in Seattle. Like an unfinished line in a poem, I’d think about it into the night, haunted by what I could have done differently, what subtle change would heighten the form.

In my zeal for the perfect biscuit, I turned to Irvin Lin, who took me to my first gay bar when I was a high schooler in 1992. He’s now a well-known baking blogger in San Francisco. With my new biscuit baking fixation, his number became the one I called and texted the most with a frequency disproportionate even for our decades of friendship. I soon dropped the niceties of inquiring about him or his husband, and dove right into questions about pastry blenders, types of flour, marble versus wood blocks, shredding versus cubing butter, and parchment versus silicone.

Irvin was patient and informative. I felt a karmic payback for all the times I had encountered a fledgling poet with a hunger to know more, do it better, love it deeply. Irvin guided my hand as I started a new and passionate pursuit. I made biscuits as if my life depended on it. And then, something happened that made me think art, poetry, and creative pursuits might not be what keeps us immortal.

Family friend and artist Chuck Volz made pancakes for me in Santa Fe, six months before his death in March. That is my last memory of him. COVID prevented hospital visitors and a memorial service. Everyone had to experience their grief separately. The morning after, instead of staring at his New Mexico landscapes and weeping, family members made his lemon blueberry pancakes recipe. The people who had meant the most to Chuck mourned him with their taste buds. 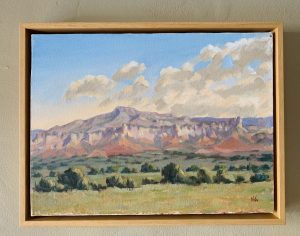 The Pedernal. Photo by Steven Reigns

Georgia O’Keefe, one of Chuck’s idols, thought that if she painted the Pedernal enough times, it would be hers. In some way, I thought that if I made Tom Douglas’s biscuits enough, the recipe would be mine. She wanted to possess that mesa; I wanted to possess something that felt just as impossible and important. Poetry felt too big to own, and righting our government seemed insurmountable. I wanted something to be mine, something that those I loved would remember. I made biscuits every day when I read about police unjustly taking and injuring Black lives. It was how I feebly managed my feelings. I no longer ran to grab a pen and paper, but a rolling pin, and I baked to comfort myself and the dozens of friends to whom I gave biscuits wrapped in foil.

Baking biscuits felt vital. As a gay man, this is the second plague I’ve lived through. I didn’t know if I’d survive this time, but what might last was what I made others taste in a world upended by division and cruelty. It is the same passion that first led me to poetry.

One morning, as a batch was cooling, UPS dropped a package at my door. From its shape, I could tell it wasn’t the bag of specialty flour I’d ordered from a Southern grocery store. Instead, it was one of Chuck’s earlier canvases sent by his family. A mountainous landscape with cream clouds and light blue sky and almost in its center, the Pedernal.

The biscuit recipe I use is “Serious Biscuits” by Tom Douglas, online at The Splendid Table. You can also purchase the cookbook it came from over at Bookshop. 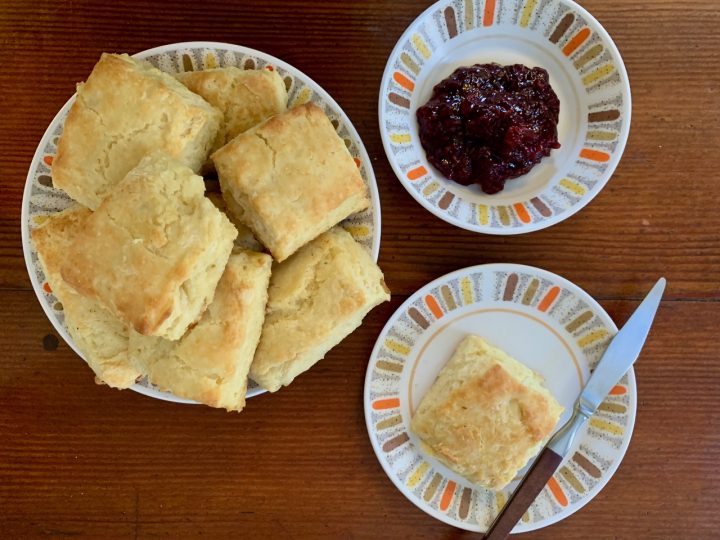 Steven Reigns is a poet and founder of The Gay Rub. He lives in Los Angeles with dear queer literary friends he’s made biscuits for during the pandemic: Bernard Cooper, Amy Scholder, Darin Klein, John Morgan Wilson, Justin Sayre, and David Francis.

If you see friends and family sharing misinformation about a critical issue like COVID-19, an election, or a political candidate, what do you do? Learn how to stop the spread of misinformation in your closest circles with our tip sheet: https://bit.ly/2ZnZ7qt. #WhatToExpect2020

Actress & activist Alyssa Milano (@Alyssa_Milano) is one of 100+ writers, artists, academics & public servants who penned short essays for the #WeWillEmerge project, a multi-vocal statement that imagines a blueprint for a post-COVID world. Read more: https://bit.ly/3iNsCK8.