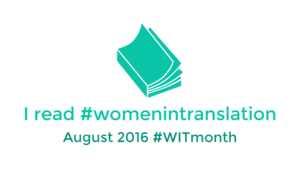 In May 2014, blogger Meytal Radzinski, a student of biophysics in Israel and an avid and insightful reader, announced the first Women in Translation month, to be held that August. Her goals, she wrote, were simple:

1. Increase the dialogue and discussion about women writers in translation

It was an idea born of her realization that not only were most of the translations she was reading written by men, but in fact most translations published were written by men—and not just by a little bit, but disproportionately so. “Based on my rough calculation,” Radzinski wrote in December 2013, after examining the database of titles in translation published in the US in 2013 (compiled by Chad Post of Open Letter Books, at the website Three Percent), “women writers contribute less than 30% of the literature that is translated into English.”

One of the commenters on that post pointed out that author and translator Alison Anderson had written an essay on the subject for Words Without Borders in May 2013, titled “Where Are the Women in Translation?” In addition to data from the Three Percent database, Anderson also cited statistics from the Best Translated Book Award, the PEN Translation Prize, and the Independent Foreign Fiction Prize. These revealed that not only were a disproportionate number of male authors translated into English, but a disproportionate number of men were nominated for prizes and won them. (“Is it time to found a prize for women in translation?” she asked.) Anderson pointed out that the situation in translation was part of a larger pattern, documented by the New York City–based VIDA: Women in Literary Arts, whose research revealed that “although the majority of readers of novels are said to be women, they remain grossly underrepresented in publications, whether as reviewers or subjects of review.”

Meanwhile critic Tara Cheesman-Olmsted, blogging at BookSexy Review (since renamed Reader at Large), had been following Radzinski’s posts and proposed an “informal challenge to fellow readers, bloggers and reviewers: in 2014 challenge yourself to read a set number of books in translation written by women — and then review them. The review part is key. Whether on a blog, as a contributor to a traditional media outlet or on Goodreads it’s important to give these authors a little marketing nudge.” She added, “Hmmm … this could merit a hashtag. Something I’m terrible at. Anyone?”

So it was that when Radzinski announced the inaugural WIT Month in 2014, she encouraged her audience to share about the books by women in translation they were reading, as well as any related information or events, by commenting on her blog, emailing her, and tweeting using the hashtags #WITMonth or #womenintranslation.

The idea caught fire, and in the two short years since then, a host of other initiatives have sprung up to raise awareness of the issue and, more important, to redress the imbalance. An exhaustive accounting would be impossible, but to name just a few:

​In the past two years, awareness of the disparity between male and female authors translated into English has skyrocketed (and, more recently, increased attention to the low numbers of writers of color translated as well). To some it’s obvious why this matters, but to those who wonder why it’s important to read women in translation, the answer is that we live in a world that’s more or less half women, half men. If our reading skews overwhelmingly male, we miss out on what half the world has to say, in terms of both story and style. And by the same token, in a world of 7.4 billion people, with only 1.5 billion of them speaking English (native or otherwise), if all we read is books by English-speaking authors, we’re missing out on 85 percent of what the world has to offer.

How far this movement goes, and how fast, remains to be seen. Translators are certainly doing their part. It’s up to publishers now to pick up the ball and run with it.

PEN America has joined @POMED, @hrw, and other human rights groups in calling for the Biden administration to investigate Egypt's role in the murder of Saudi journalist and U.S. resident Jamal Khashoggi. See our statement here: https://bit.ly/3vSegh6.

Join PEN America, the Project on Middle East Democracy (@POMED), and members of Turkey’s cultural, artistic, and literary communities in discussion of these trends and recommendations on how policymakers might respond to Erdoğan’s campaign of repression. https://pen.org/event/cracking-down-on-creative-voices-turkey/

We’ll be announcing the 2021 Firecracker Awards winners live at The Center for Fiction this evening! We’d love to see you there: https://centerforfiction.org/event/the-clmp-firecracker-awards/