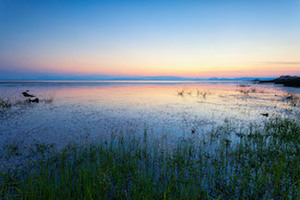 March 11 marked the anniversary of the 2011 earthquake, tsunami, and nuclear disaster that struck Japan and devastated thousands of lives. Hideo Furukawa’s book Horses, Horses, in the End the Light Remains Pure: A Tale That Begins with Fukushima blends fiction, memoir, and history to tell the story of the narrator’s journey back to his childhood home near Fukushima after the 2011 disaster.

Furukawa will be participating in the event Monkey Business: Japan/America Writers’ Dialogue on Saturday, April 30, at the PEN World Voices Festival.

An older brother questions his younger brother. He wants to know,

The younger brother cannot answer, so he changes the question.

—What if there were this extraterrestrial, and they are in their UFO, and you could pick just one Beatles song for them to listen to, what would you pick?

“Strawberry Fields”: the name of an orphanage that really existed in Liverpool, the harbor town that looks out on the Irish Sea. An orphans’ song. A song of the orphans maybe, certainly for the orphans.

An open atlas brought the scene to mind. The scene calls up many related emotions. Not a map of England. It had nothing to do with England, or even Europe, nor North America. It is a 1:140,000 scale map of a place labeled “Nihonmatsu.” The city of Nihonmatsu occupies the center. But I wasn’t looking at the center of the map but up to the north and east. In the upper right-hand corner of the open page, along Route 114, you can find the “UFO Friendship Center.” Everyone who lives there calls Route 114 the “Tomioka Highway.” There is a “UFO Road” close to the UFO Friendship Center, complete with statues of extraterrestrials, according to the explanation in red letters. I read the whole thing. I read the whole thing, my gaze stopping on the place name and the explanation. That’s what called up this scene. The scene of the two brothers. Right then, seemed like the most natural thing in the world, I knew I had to go there. The next instant, I rejected that decision. What was I hoping for? What I hoped for in that instant was for the statues of the extraterrestrials to be toppled, to be crushed, reduced to shards scattered and broken across the landscape. Wanted them pulverized rather than not pulverized. I closed the atlas.

Closed it with a sharp slap. Or maybe a softer rustle like the flapping of a great bird’s wings. The UFO Friendship Center might be within the Fukushima city limits, or maybe it was Kawamata City, or maybe some other city. I didn’t double-check. Anyhow, north of Nihonmatsu, then east.

East, then north. I can’t forget that original scene. I am unable to forget it. Two brothers. The younger brother responds to the elder without hesitation. “Strawberry Fields Forever.” Once the song starts in your head, it won’t stop. I hear it now. I may be hearing it forever. “Forever.” It’s a scene from a novel. And I’m the author of the novel.

“North” plus “east” adds up to Tohoku, as in the prefectures of northeast Japan, which is what “Tohoku” means. There’s the voice again. It overlaps with the song. A clear command: “Go there.”

Eyes must be closeable. It’s a characteristic of sight. It’s what fun­damentally sets it apart from hearing. Eardrums have no lids. But retinas are outfitted with eyelids. So it should be easy; you’d think, but I can’t do it. I keep staring at the television; now the surface of my eyeballs is totally dried out. More like the dam has burst, actually. Teardrops fall. They are dripping like rain. How many times can it occur in an hour? Frequency can’t be ascer­tained. “One hour,” the unit of measurement disappears. Not 24 of them in a day. Commercials have disappeared from the TV. Delimiters disappeared. Things that cannot hap­pen in the mere span of one day are happening, expanding—expanding, proliferating, on and on. The only phrase I can think of that captures the experience: “time is extinguished.” To phrase it more concretely, consciousness of the date on the calendar, the day of the week, has collapsed. I think I can put a name to it: “Spirited away.” Abducted by spirits. When a person is spirited away, seven days are experienced as half a year; three months feel like a matter of seconds. Time can’t be accounted for, it’s impos­sible to measure. I wrote about being “spirited away” in a novel. You know which novel, that novel.

Here’s another scene. It’s also related to a Beatles song.

The younger brother is asking the older: “What song is it, the one where the gull cries. You know, the one where you hear the seabirds in the intro, which one is that?” Older brother has an answer: “Tomorrow Never Knows.” They used a tape loop so that the psychedelic song had an effect that sounded like seagulls. Both of them know about this, about these seagulls—known as “sea cats,” actually—that sound like mewing cats, with their breeding ground up on the coast of Sanriku. They know all about it. And both of them are remembering the time they set off for the harbor town of Miyako up in Iwate Prefecture. Who knows why, but the younger brother remem­bers only the fierce birds, the kites, that gathered there. “In Miyako,” he starts to say to the older brother, but older brother cuts him off, “Nope, we also saw the gull-like birds they call sea cats.”

They went straight through Miyako.

On one of the roads taking them through to the next prefecture.

Which took them into the six northern provinces, to Tohoku.

I passed through there too. Just like the brothers, I saw Miyako, and also traveled up north past the Sanriku coast, and stayed one night in some budget hotel, just to be able to describe that scene. That scene with the two brothers. I still remember all those birds, black kites, nothing if not fierce. Like they owned the town. But I am staring at the TV, watching the news, and that Miyako is not to be seen. The town has disappeared. The elevated roadway there is probably Route 45. I have a vague memory of it being laid out like that. Everyone up there called Route 45 “the Beach Road.” I wonder if there is anything else recognizable. I open the atlas again. I run my eyes down the coastline. I wonder if the line on the map is still true to the actual coastline. Impossible. Wondering about things in Jōdogahama? Geez, makes me want to rain curses on such a place name: Jōdo? As in “the Pure Land”? Where’s the heaven in that?

Such a place now seems far away.

Infinitely far, I’m thinking now. I am remembering the scene but my brain won’t call up the melody for “Tomorrow Never Knows.” It continues, “Forever,” on repeat. “Strawberry Fields” brings to mind the sea breeze. I remember the Miyako harbor and the Hei River. This all feels wrong.

I close the atlas with my thumb between the pages.

Excerpted from Horses, Horses, in the End the Light Remains Pure by Hideo Furakawa and translated by Doug Slaymaker with Akiko Takenaka. Copyright (c) 2016 Columbia University Press. Used by arrangement with the Publisher. All rights reserved.