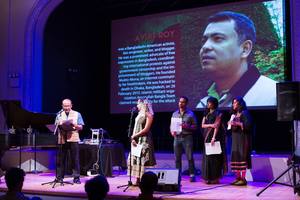 Today marks one year since Bangladeshi-American writer Avijit Roy was hacked to death by a group of Islamist extremists on the street outside a book fair in Dhaka, Bangladesh. (Also see Shabnam Nadiya’s tribute letter to Roy.) His wife Rafida Ahmed survived, but was injured as she tried to help Roy, suffering deep ax wounds to her head and losing a thumb. Roy was an integral member of the “freethinkers” movement in the country that espoused rational thought and supported the promotion and protection of civil and human rights without a reliance on religious dogma or viewing the world through a religious lens. A lack of religious belief is seldom a publically espoused position in the country, which is 89 percent Muslim, with minorities of Hindus, Christians, and Buddhists mostly comprising the rest of the population. Roy and multiple other writers used the medium of blogging on sites, like the one that Roy founded named Mukto Muno (meaning “freethinkers” in English) and several others, to publish writings and musings on atheism, secularism, human rights, and social, economic, and political issues in Bangladesh. These writings made the bloggers targets for religious extremists in the country. In 2013, a “hit list” of 84 “atheist bloggers” was sent to newspapers anonymously. Of the six bloggers and publishers who have been murdered since 2013, four were on this “hit list.”

Roy was the first of five individuals murdered by Islamist extremists in Bangladesh during an onslaught of attacks during 2015. The most recent murder was that of a publisher of Roy’s work, Faisal Arefin Deepan, on October 31, 2015. On the same day, another publisher of Roy’s work, Ahmedur Rashid Chowdhury (also known as “Tutul”), was attacked and suffered critical injuries. The most recent assault indicates a worrying increase in these extremists’ coordination and sophistication in carrying out these types of attacks. Two extremist groups, Ansurallah Bangla Team and Al Qaeda in the Indian Subcontinent, have claimed responsibility; however, the attacks usually result in impunity for the killers or a lack of action by authorities in regards to investigating the attackers’ identities. In the case of Roy’s murder, Ms. Ahmed saw many police officers standing by who did nothing to help. The exception to impunity for the killers was the December 2015 conviction of those accused of the 2013 murder of blogger Ahmed Raijb Haider. The organizer of the attack was sentenced to death in absentia because his whereabouts are unknown. Even so, most of the other murders have not been thoroughly investigated, and no one yet held accountable for the deaths.

The non-state actors that carry out these murders are emboldened by a coalescing of conditions in Bangladesh that have created a diminished respect for the right to freedom of expression. Law enforcement authorities’ inability or unwillingness to identify or prosecute the killers plays a part, but perhaps more insidious is the government’s negative rhetoric directed at the bloggers—urging them to essentially self-censor and desist from writing—as well as the utilizing of legislation that criminalizes any speech seen as offensive to or critical of religion or the government. In the spring of 2013, the far-right and conservative Islamic party Hafazat-e-Islam, who have been known to make extreme statements about how to punish those that insult Islam, held demonstrations calling on the Bangladeshi government to punish those “atheist bloggers” who were critical or defamatory towards Islam with the death penalty. The government obliged this desire for punishment and arrested four bloggers under a colonial-era law that prohibits publishing works that are offensive to another person’s beliefs. They were also charged with violating Article 57 of the Information and Communications Technology (ICT) Act, which deems any online content that “encourages dishonesty, offends anyone, or tarnishes the image of the state or any person” as worthy of jail time. Since then, more than a hundred arrests have been made utilizing Article 57 of the ICT, which carries a penalty of 7 to 14 years’ jail time regardless of the nature of the offensive material. On February 16, 2016, Bangladesh police arrested 73-year-old publisher Shamsuzzoha Manik and two of his associates in Dhaka for launching a book that was deemed offensive to Islam. The three will be charged under the ICT and face up to 14 years in jail. Amendments to the ICT made in 2013 allow the government to detain suspects indefinitely without bail and exercise extended powers during the investigatory period. The arrest occurred the day after Manik’s publishing company’s stall was forcibly closed by police at the month-long Bangladesh International Book Fair in Dhaka following threats of violence by Islamist extremists.

In the past few years, the government has also curtailed other types of media and speech freedoms within the country. This past week, more than 30 cases of defamation and sedition were brought against Mahfuz Anam, the editor of the largest circulation English-language newspaper The Daily Star, reiterating the use of criminal defamation laws to silence and punish those who criticize people in power. Contempt of court laws are also used to silence critical voices, including that of British journalist David Bergman, charged in December 2014. Television talk shows have been subject to censorship because of critical coverage, such as Frontline, hosted by Matiur Rahman Chowdhury. Chowdhury’s outspokenness and choice not to cover solely favorable stories and guests resulted in Frontline being pulled off the air indefinitely in February 2015. Military and police intelligence agents have been known to threaten, harass, and attack reporters and journalists when they are working. The 1974 Special Powers Act allows the government to detain journalists for up to 120 days in jail before charging them for material found to be critical of government policies or officials. The blocking of social media websites and apps has also become increasingly common. In November and December 2015, the government shut down Facebook, Twitter, Skype, WhatsApp, and other similar services that are crucial outlets for the sharing of news and information, in blocks that lasted for more than a month.

A year after Roy’s murder, the state of free expression has deteriorated markedly. The government of Bangladesh needs to change course to reverse this erosion of a key component of democracy and economic development, by unequivocally protecting the right of freedom of expression and acting in a way that prevents non-state actors from threatening that right. Scrapping or revising laws that can be used to punish speech or publications deemed critical or insulting is a key step towards respecting expression. So too is a concerted effort to investigate the cases of past attacks and murders and bring those responsible to justice, as well as to provide protection for those individuals still at risk of attack. Otherwise, the ability to speak and express one’s self freely will be circumscribed for ever-widening swathes of society, with negative consequences for governance, economic growth, and Bangladesh’s rich literary and creative traditions.