The Thrill of Discovery 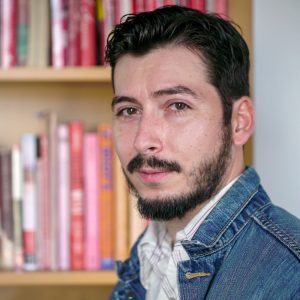 It’s almost the close of our 2018 Emerging Voices calendar, and Fellows Jubi Arriola-Headley, Ron L. Dowell, Natalie Mislang Mann, Angela M. Sanchez, and Francisco Uribe have words to share. A weekly series through the end of July, PEN America’s blog will feature essays on these writers’ lives and how Emerging Voices helped them claim “writer” as identity.

Are you a writer? Apply to be a 2019 Emerging Voices Fellow through August 1. Want more of the 2018 Fellows? Join us for the Final Reading on August 3 at the Moss Theater in Los Angeles or via Facebook Live.

The Thrill of Discovery

My family was never much into literary books. They read cheap paperbacks that cost less than a dollar, the stories printed on thin newsprint. My mother bought El Libro Semanal weekly. The covers of those books often had sultry-looking housewives in tears, with titles like Limosnera de Amor, which translates to Beggar of Love. My father liked his Westerns. Every time he went to Ensenada Market, on West Gardena Blvd., he picked up the latest story by Marcial Lafuente Estefanía. Those covers, I remember them well, too. Desperate men, in dire straits. I found their books everywhere: in the bathroom, the living room, in the kitchen. I would pick them up, wanting to read them, but I struggled. At six years old, I was already more comfortable with English words in simple sentences.

One day, a salesman walked up to our apartment and sold my mother two sets of encyclopedias. She didn’t normally buy things from traveling salesmen. In fact, because my mother didn’t speak English, she rarely answered the door to strangers. But I think my mother felt sorry for the man. He lugged the heavy books, and she allowed him to give his sales pitch. My mother ended up buying one complete set of the World Book Encyclopedia and one set of the Childcraft edition. A complimentary subscription to Zoobooks was included. When my father came home, he saw the books with their hardcovers and gilded pages. He knew they were expensive. We lived in a two-bedroom apartment. In one room, my father, mother, sister, and I slept. In the other, my aunt slept with her husband. In the living room, my three uncles spent their nights: one on the sofa, two on the floor. We always needed money for rent and food. My father told my mother she had to return the books. My mother stood her ground. She called for my sister and me and told us to read something from the Childcraft encyclopedia. My father listened, not saying a word. A few days later, he built us a bookshelf.

In the days before the internet, they were my window to unknown worlds and histories. They were my literature. In elementary school, I wanted to play for the Dodgers when I grew up, so I read about Jackie Robinson and Babe Ruth. In middle school, when I wanted to be a professional boxer, I read about Jack Dempsey and Muhammad Ali. I learned all I could about the Aces of both World Wars and the planes they flew when I wanted to be a fighter pilot. After reading Call of the Wild, I looked up Jack London’s short biography. I wrote down the titles to some of his other books and sought them out at the school library. I did the same with Steinbeck, Hemingway, and countless others because reading one author leads to the thrilling discovering of another. Back then, it seemed like all the answers could be found within the pages of the World Book Encyclopedia.

I didn’t start writing for myself until I was in community college. There, I was trying to figure out what it was that I wanted to do, and I explored many creative paths: music, painting, and filmmaking. I ended up taking all the film analysis and production classes that the college had to offer. I was determined to be the next Federico Fellini, and I began to write down the stories that someday I hoped I would direct. As I began to write, I realized there are limits and restrictions to filmmaking. In writing, there are no limits. As I wrote more, I wanted more out of my stories. I wanted to be able to create worlds that would haunt, thrill, excite, and romance the reader, but I lacked the skill to be able to do so. So I began to look for opportunities to improve myself as a storyteller.

When I applied for the PEN Emerging Voices Fellowship, I had taken a lot of classes on my own, but I didn’t think I could ever call myself a writer. I believed there was only one mold for writers, which I didn’t fit. In my mind, a writer was someone who had an MFA, had traveled extensively, and came from a privileged class. Through our Author Evenings, I have come to realize that writers are as diverse in their background as they are in their approach to their craft.

I still have those encyclopedia sets. I have never asked my mother why she bought them. She could not read them, but she liked it when my sister and I read them to her, even if she did not understand. She must have known that the mere act of reading would lead to something special. And it has. It lead me to try and understand my own stories.