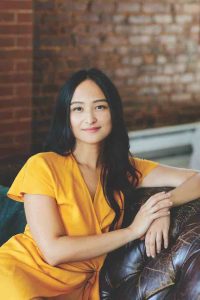 1. What was the first book or piece of writing that had a profound impact on you?
It’s been interesting to look back and try to understand the stories that snagged in my brain when I was younger, but I recently remembered loving The Search for Delicious by Natalie Babbitt. The concept, as I remember it, is that a 12-year-old boy has to survey the entire country for what the true meaning of “delicious” is; everyone has to be in agreement, or war will break out. The king sends him around, but everyone he encounters has a different, passionate response, which threatens to tear their country apart—until they realize that, in a drought, what everyone can agree upon is that though they have their own definitions of delicious, that water is delicious to all.

I think I was already feeling so suffocated by my homogenous town that to see so many different preferences and passions declared was exhilarating. I was reading it, hoping that a world that was less homogenous did exist, where I was allowed to have, or be, a different definition from others, and that the existence of that wouldn’t alienate me—that I could still be united with people, side-by-side with being different from them.

2. How does your writing navigate truth? What is the relationship between truth and fiction?
Sometimes people assume my novel is autobiographical because I provided my protagonist with similar circumstances of my life, but nothing that happens in the book is true. Still, I feel that there is so much of myself in Willa in terms of emotional truth. Many of the events I made up stemmed from emotional truths in my life, that I refashioned into what I thought would serve the narrative. There should be truth in fiction for it to work, but not too much, because life can be more outrageous and more devastating.

“Sometimes the scrim of a story allows us to see things with more clarity and empathy—things we might look away from or numb ourselves to in our real lives. Looking through a pane of glass, unable to reach out and touch, allows us safety in some way, privacy to engage on our own terms.”

3. Why do you think people need stories?
Sometimes the scrim of a story allows us to see things with more clarity and empathy—things we might look away from or numb ourselves to in our real lives. Looking through a pane of glass, unable to reach out and touch, allows us safety in some way, privacy to engage on our own terms.

4. Where was your favorite place to read as a child?
I’ll read anywhere, but I’ve always liked reading in private best—in the sanctuary of my bedroom—and I liked doing that as a child as well, tucked away in my own little world. Though I also have fond memories of my hometown library, where I won the Read-a-Thon one summer.

5. What’s a piece of art (literary or not) that moves you and mobilizes your work?
Bong Joon-ho’s movies—how they engage with his values and take on things like capitalism and globalism in entertaining, winking, and genre-bending ways. I love that his characters are ordinary, rather than ordained, and yet, you care for them immensely. I don’t believe that characters should have to be “special” to earn a story. His characters are often screw-ups who stumble into something; they could be anyone.

“I wanted to create a character who was navigating the mixed identities I had been fumbling with all my life. I had not read about a lot of biracial characters or characters who grew up in blended families. . . . I wanted to tell a story about someone who lived in a more unnoticed space, and to notice her.”

6. What advice do you have for young writers?
Be generous and flexible with your writing self, but be rigorous and clearheaded about what it is you want to say.

7. Win Me Something follows Willa Chen, a 24-year-old biracial Chinese American woman who starts a job as a nanny for the daughter of the Adriens, a wealthy white family living in Tribeca in New York City. How did you come up with the character of Willa, and what compelled you to tell her story?
I wanted to create a character who was navigating the mixed identities I had been fumbling with all my life. I had not read about a lot of biracial characters or characters who grew up in blended families, but after high school I did encounter a lot of people who had been in similar situations to mine. It was so shocking each time I met someone who shared some feeling I considered private and distinct.

I was always wrestling with the idea that sometimes the loudest or flashiest or most familiar stories were the ones being told, when I felt there was still value in the quieter, smaller places. I wanted to tell a story about someone who lived in a more unnoticed space, and to notice her. 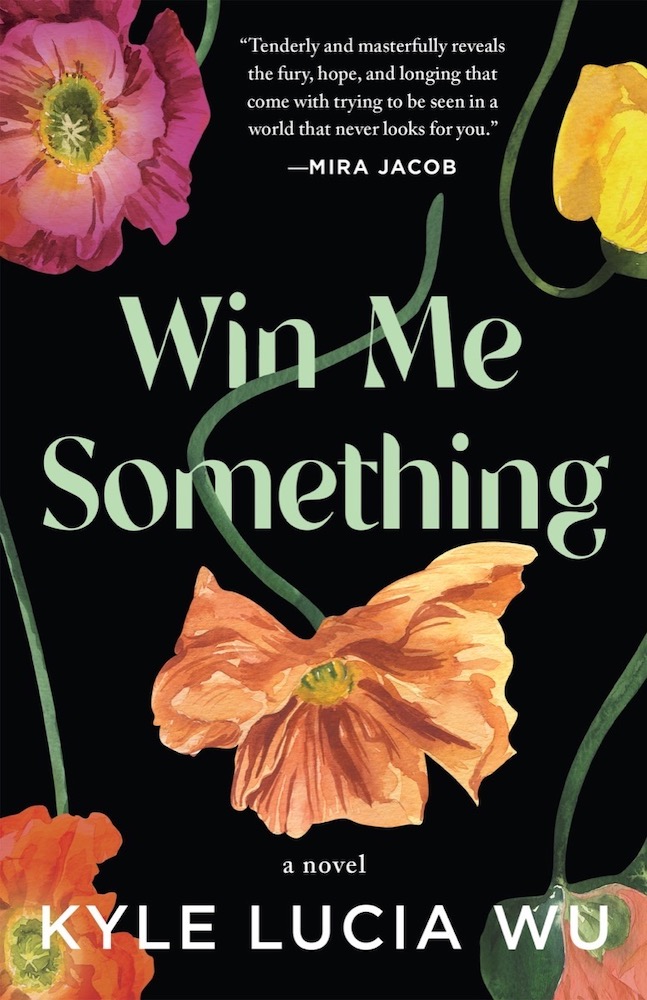 8. I was really intrigued by the format of the book: Each chapter is only a few pages long and focuses on a particular moment or scene in Willa’s life (whether past or present). I’m not sure if this was your intention, but this format actually reminded me a lot of diary entries, especially because the beginning of each chapter identifies the city and year that specific chapter takes place. What inspired you to choose this writing format for the book?
I never thought of it like a diary, but I like that comparison. I’m compelled by reading diaries and that appealingly voyeuristic view into someone’s inner life. I really wanted this book to be intensely interior because Willa feels like no one knows her; I wanted the reader to feel close to her while reading.

It did feel scary to hope that readers would understand what I wanted to say through Willa’s thoughts, and sometimes I was tempted to hold the reader’s hand a bit more. I was reading Pik-Shuen Fung’s Ghost Forest while revising, and when I interviewed Fung, she said that she left a lot of space because she wanted to trust the reader to have their own experience of the text. I thought that was so beautiful but also courageous of her as a writer. And I thought that I wanted that for Willa; I wanted to trust readers to see her with their own eyes.

“Asian American studies is not widely taught in our country, and sadly a lot of people don’t know about basics like the Chinese Exclusion Act, the murder of Vincent Chin, the Third World Liberation Front, the Delano Grape Strike, the Chinese workers of the Transcontinental Railroad, the long history of hate crimes against Asian Americans, and on and on and on. . . . an education on the Asian American experience would be vital for anyone as a foundation for the next steps of allyship—of which there are many.”

9. As a biracial Chinese American woman, Willa has experienced many racial microaggressions in her life—whether they involved her boss thinking she’s Korean because she has nice skin, another student at school being repulsed by Asian food, or her being mistaken for someone else who is Asian. I felt bad for Willa because she never really found her voice or courage to speak out against these microaggressions—a feeling I can relate to—but Willa also did not have a strong support system. For almost the last two years, the AAPI community has watched in horror as our people have been physically attacked due to anti-Asian sentiment fueled by the COVID-19 pandemic. Really though, just like Willa, many of us in the AAPI community can probably point to countless racial microaggressions we’ve experienced throughout our lives, not just limited to the last couple of years. How do you think the people around us can serve as better allies for the AAPI community?
I think there are a lot of answers to this question, but a first step for many people would be to educate themselves on Asian American history. Asian American studies is not widely taught in our country, and sadly a lot of people don’t know about basics like the Chinese Exclusion Act, the murder of Vincent Chin, the Third World Liberation Front, the Delano Grape Strike, the Chinese workers of the Transcontinental Railroad, the long history of hate crimes against Asian Americans, and on and on and on.

For someone like Willa, she hasn’t been brought up with access to this history both because of the force of assimilation and the absence in her education, and that exacerbates her feelings of isolation and alienation. I think it would have been radically inspiring for her to know about Grace Lee Boggs, Yuri Kochiyama, Gidra, and so many other parts of Asian American history, and I think that an education on the Asian American experience would be vital for anyone as a foundation for the next steps of allyship—of which there are many.

10. The book made me think of the connections and complicated dynamics between the feelings of loneliness, solitude, and being around company. Willa has gone her whole life wanting to be seen—something she was not able to get from school and her family—and represses feelings of loneliness as a result. She has found herself in social settings though, often feeling uncomfortable and not knowing how she “should” be interacting with others. At the same time, I wouldn’t necessarily say she prefers solitude. How does one go about navigating the coexistence—and sometimes conflicting dynamics—of all these feelings? Have you had times in your life where you’ve had to grapple with these emotions simultaneously?
I’ve definitely had the conflicting feelings of I don’t want to go to the party/I feel a little sad that I’m not at the party! I think a lot of this boils down to feelings of safety. It’s beautiful and valuable to be able to be vulnerable with others, to open yourself up to intimacy, but it’s also difficult if you’ve been let down in these situations in the past. It can be hard to behave with the same ease that others have.

The exertion of being around people who you feel on edge around is a completely different experience than being around those you feel nurtured and supported by, which can also be confusing if you haven’t yet found the group that makes you feel safe. I think that many of us need both experiences—solitude and camaraderie—and I know that I do.

Kyle Lucia Wu, author of the debut novel Win Me Something, has received the Asian American Writers’ Workshop Margins Fellowship and residencies from Millay Arts, the Byrdcliffe Colony, Plympton’s Writing Downtown Residency, and the Kimmel Harding Nelson Center. She is the programs and communications director at Kundiman and has taught creative writing at Fordham University and The New School. She lives in New York City.

The PEN Ten: An Interview with Lisa Hiton

The PEN Ten: An Interview with the 2021 Emerging Voices Fellows

For months, a handful of books dealing with #LGBTQ themes have been targeted by #KansasCity area conservatives. But facing a new Missouri law, some schools have removed a wider array of books, including #SlaughterhouseFive, #Watchmen and #TheHandmaidsTale. https://www.kansascity.com/news/local/education/article266556371.html#storylink=cpy

Thrilled to see this important recognition of the deeply courageous work of activists from Ukraine, Belarus, and Russia, including @pen_belarus member Ales Bialiatski. #NobelPeacePrize2022 https://twitter.com/nobelprize/status/1578309539870318603