The PEN Pod: Fighting for Artistic Freedom in Myanmar with Karin Deutsch Karlekar and Bart Was Not Here 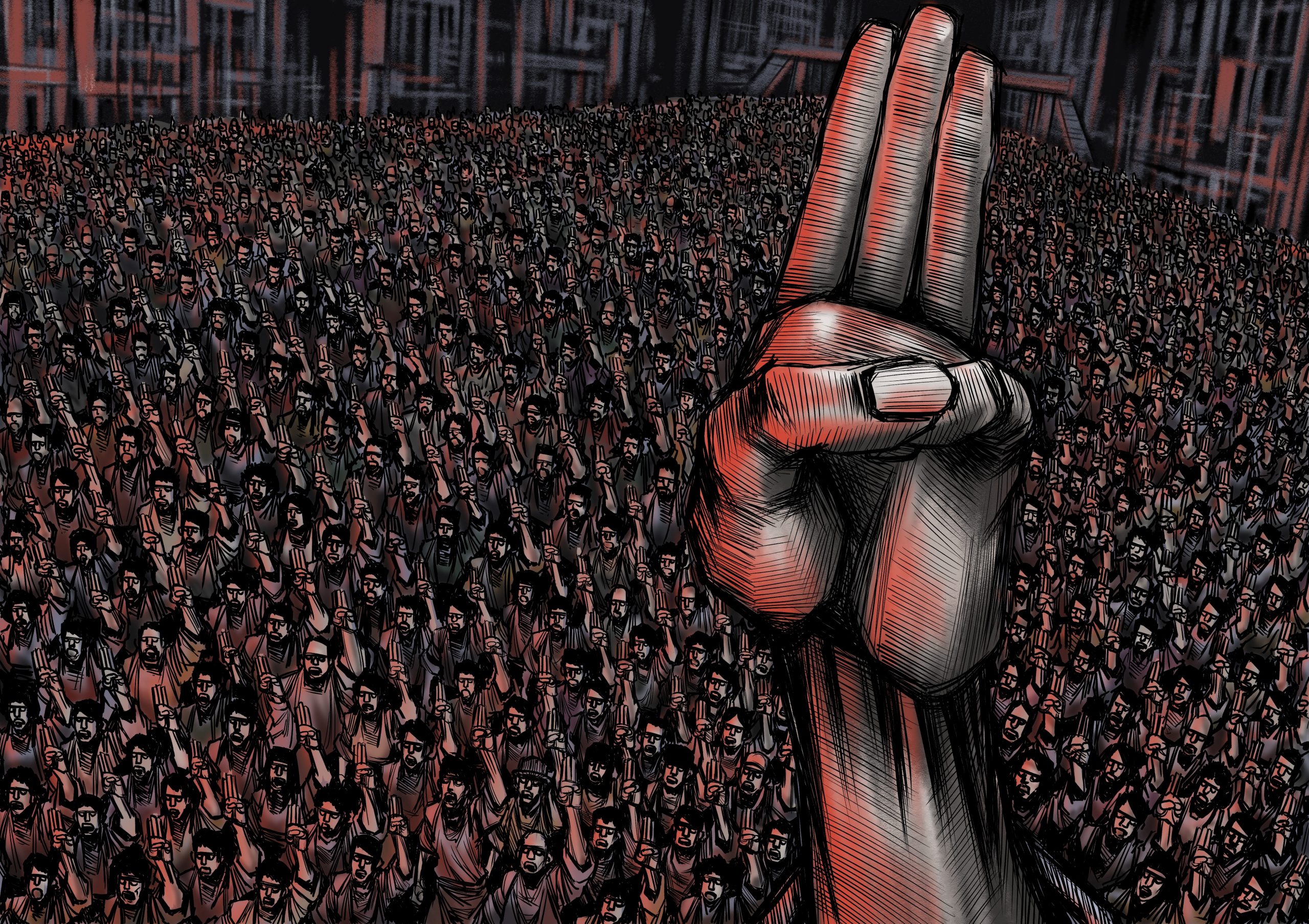 In PEN America’s new report Stolen Freedoms: Creative Expression, Historic Resistance, and the Myanmar Coup, we reviewed the cases of over 100 leading writers and artists who have been continuing to fight for artistic freedom amid profound risks nearly a year since a coup in Myanmar. Today on The PEN Pod, we spoke with Karin Deutsch Karlekar, the director of PEN America’s Free Expression at Risk Programs, and a graphic artist from Myanmar who signs his work Bart Was Not Here, about the state of human rights in Myanmar, as well as the role that art and artists play in the struggle for artistic freedom. Listen below for our full conversation (our interview with Karin and Bart is up until the 22:33 mark).

On the State of Human Rights in Myanmar

KARIN DEUTSCH KARLEKAR: “We’ve seen at least 59 creative artists have been the victims of serious human rights violations, we’ve documented at least 45 artists who have been detained, and more than half of these remain in detention, and at least four have been sentenced and convicted to prison terms on a range of baseless charges. . . . What we’ve also seen is a violent crackdown, in which nonviolent protesters and others have been targeted by excessive violence by military and police forces. So we’ve seen, in terms of the creative community and in general, there have been thousands of people detained and hundreds killed in the last 11 months.”

BART WAS NOT HERE: “For me, it’s just experiencing, in person, what I heard all the time [when] I was growing up—like the artists and the poets and the filmmakers and the musicians. . . . They talked about extreme censorship, they talked about tweaking in some lines or tweaking in some imagery in their mainstream work, and getting the knock on the door at 3am by the people in army, military uniform, taking them places and asking them questions or hitting them.

On the Role that Art Plays in the Struggle for Freedom

BART: “Art is a huge spectrum. In terms of visual arts, I think visual artists record the history in their own little lens, by how they see it. . . . Artworks are like POVs of what’s going on and what could be, and I think there’s an element of hope in it. Personally, with my artwork, when I started doing this protest art—or any form of art that has to do with the resistance—it’s my way of consoling my people. I’ve been making art since I was in eighth grade, I’ve been doing it for a long time, and I’ve been in the art community for a long while, and I actually know what they’re feeling.

“All of my artwork that I’ve produced since the first of February, they all deal with making people feel like it’s okay; we’re all in this together; and if you’re mad at this, I’m mad at this as well, and we reveal all the same emotions in the spectrum.”

KARLEKAR: “The role of the creative sector and artists in, as Bart says, providing that hope, and providing that sense of unity, is very very important for people as they’re trying to get through this, what may be an extended period of military rule—hopefully not, but you never know. So I do see artists as really playing a key role and inspiring protesters, and as Bart says, providing a point of view but also providing graphic images of some of the protests, providing images of some of the people who have been detained, providing this documentation in artistic form of what’s going on. As someone on the outside looking in, it’s quite inspiring to see how people are employing all varieties of the creative spectrum—musicians, visual artists, poets; they are all trying to document the moment, use art to express what people are feeling.”

The PEN Pod: On Disinformation Consumers, Trump Texts, and Free Speech Battles Ahead