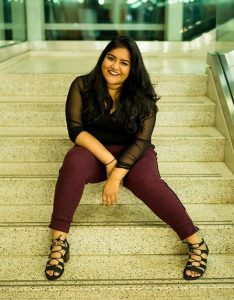 Today, we share Rayna Taher’s story on being a Muslim American. The piece is Taher’s response to The M Word’s questionnaire.

Yes. As a Muslim on a Catholic college campus, I have spent the past four years awkwardly telling fellow college students my religion and hoping that they do not shy away from me. I have been told several times that I am the first Muslim the person I am speaking to has ever met. I have never been outwardly attacked, but I can sometimes sense discomfort. I have seen and heard discriminatory remarks and actions from people who do not know I am Muslim, and I am often the only person of color and non-Catholic in the room. It has been a very interesting college experience.

When you aren’t outwardly Muslim, it is easier. I am mistaken for Hindu or Christian all the time. It’s when you point yourself out as different that people become uncomfortable. Being Muslim in America is constantly wondering if it is safe to tell someone you’ve recently met your religion. It’s a constant fear that your sisters in hijabs are going to be okay wherever they go. It’s hoping that every time there is a shooting or a terrorist attack, it’s not a Muslim or a person of color that committed the crime. It’s hoping that no one will ever ask you to apologize for a mistake that another Muslim has made. But it’s also cheering on every Muslim you see in the media and in the public eye. It’s supporting any Muslim actor or actress, public figure or speaker. It’s feeling a connection to people you’ve never met, and having exceptional faith that they will be the vibrant, positive representation your people deserve.

I feel a huge responsibility to contribute to the larger conversation. My college is exceptionally NOT diverse, and as such, the office of inclusion puts on a “diversity skit” during freshman orientation that tells the stories of minority groups on campus to bring out different perspectives that many freshmen have never experienced before. I was a huge part of this skit this past year, and did my best to communicate the story of the Muslim voice. It was the hardest and most draining nine days of my life. I was the only Muslim in the group, and I knew that it was my responsibility to start the conversation and portray that role in the skit: to depict discrimination that I have experienced and bring out that feeling of exclusion and being ostracized. If I did not feel this immense responsibility to contribute to the larger conversation, I would have never been able to survive those nine days.