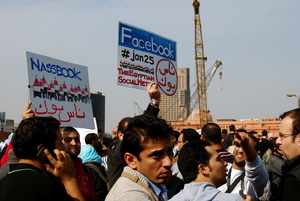 The following first appeared on the Dissident Blog, a project of Swedish PEN. What is known as the “Arab Spring” was allegedly the result of social media and its power to organize and mobilize demonstrations in 2011, but how accurate is this picture, asks poet and blogger Evronia Azer.

Many people think that the Egyptian revolution that started on January 25, 2011 was planned on social media. Some even calling it the “Facebook revolution.” Mostly, it is known as “The 2011 Uprising.” All of these ideas are completely inaccurate as far as I can tell.

First of all, what happened in 2011 wasn’t an event that took place in Tahrir Square for 18 days and ended; this is why I refuse to call it an uprising because this implies somehow that it’s now over. The first 18 days, beginning January 25, marked the beginning of a revolution that had been in the making for years before 2011—it is still ongoing, and will likely go on for years.

Secondly, what caused the population to march through the streets chanting, “Down with the regime!” and “Bread, Freedom, and Social Justice!” was caused by a force greater than just social media planning. The people who witnessed violations of their basic human rights every day and faced torture
regularly by the police—didn’t risk their lives, take part in demonstrations, and clash with security forces solely because they were mobilized by a Facebook event.

On January 25, political groups planned marches against the Ministry of Interior demanding social justice, however, as thousands more gathered, the protest broadened to include chants of “Down with the regime!”. On January 26th and 27th, Twitter was partially blocked in Egypt, followed by Internet and telecommunications, which were cut off for 5 days.

In 2009, the percentage of Egyptian households with TV access was 96.8 percent, while Internet access in homes was only 25.3 percent. In 2010, Internet users comprised 26.74 percent of the population. Therefore, if we are to assume what caused the mobilization of such a huge number of protesters was because of the media, then mobilization would have worked for the regime, not against it, since people would have been exposed more to lies on TV—since national TV could be watched almost everywhere. Blogs and other social media tools were blocked, then cut off completely, during the first and most crucial days of the revolution. Taking this into account, people were unlikely to revolt and mobilize by social media, whether through TV or the Internet. The revolution was a combination of spontaneity and inevitableness: it had to happen, given the outrageous oppression and widespread poverty.

We cannot explain January 25 without looking back on the different struggles that occurred during Mubarak’s rule—mainly those of students, workers, movements like Kefaya, the National Association for Change and the El Mahalla El Kubra April 6, 2008 strike. January 25 was the “official” beginning of a revolution that was rooted in years of tyranny. January 25 was the inevitable result of the oppressive regime’s practices and lack of social justice.

Nevertheless, social media did play a key role—despite the fact that during Mubarak’s era, it was more difficult to expose human rights violations than it is now, due in part because traditional media channels have always been pro-regime. Blogs have become a main tool towards breaking the taboo associated with criticizing the regime by publishing videos, stories, and news of protests—along with reports of orchestrated sexual assaults, torture, oppression, and other violations. On the other hand, it can’t be assumed that blogs alone mobilized the protesters that marched through the streets on January 25, because Internet usage was very low—especially in lower social classes (to which a large fraction of demonstrators belonged to).

The march occurred because general satisfaction and support of the regime was very low among the general population, with poverty levels and unemployment rates increasing, and public services—mainly health and education—were dramatically deteriorating. Blogs documented the deep frustration felt towards the regime—garnering expectations that a movement from the people would occur against the regime.

The revolution exposed the deep suffering of Egypt’s people. In a sense, the revolution didn’t bring chaos to the country, but an explosion of the people’s rage towards the regime finally revealed—the inescapable destiny due to years of pervasive corruption, lack of transparency and accountability: the destiny of an inevitable revolution.

The shield, the regime used to protect itself, was torn down on January 25. More people were becoming active and brave. Before January 25, people who weren’t activists were too scared to join protests or criticize the regime publicly, but the events of January 25 broke that barrier of fear for thousands of people—resulting in the creation of many revolutionary and human rights groups.

These groups, consisting of energetic youth from across the country, were successful in pressuring the Supreme Council of Armed Forces to release many detainees. Groups like these increased the public’s awareness of their legal and constitutional rights to fair trials. Nevertheless, the revolution still hasn’t resulted in a real political reform—the same old faces have been in power in different regimes that have ruled Egypt since January 25 until now. Crackdowns on political dissent and violations of human rights are on the rise: so what have we gained from January 25?

We’ve learned from mistakes. We’ve also seen people’s power lies not in social media, but in their bravery and willingness to sacrifice their lives for the “Bread, Freedom and Social Justice” cause—which, in reality, is a lot deeper and more powerful than an overused revolutionary cliché.

The revolution is not only a struggle between oppressive Islamist and military regimes, but a struggle by the people for freedom and social justice.  These needs will not be fulfilled until the people carve their own path and the capitalist class structure is eradicated. We have hope, because as long as oppression exists, Egyptians will continue to mobilize, and the revolution will continue to be strong, spontaneous and inevitable.—even if it takes years to reach real social and political reforms. Decades of corruption doesn’t end in 18 days or in mere months. Revolutions take years to happen, but the will of the people shall one day prevail.

Check out the list of nonfiction books curated for PEN America's #WhatToExpect2020 reading list. These books provide historical context around this moment and can help you navigate disinformation, voter suppression, and more: https://pen.org/what-to-expect-when-youre-electing-reading-list/