Introduction To Volume 13.0:
The Closing Issue

Though these numbers paint one devastating picture of the past 17 months, COVID’s impact behind bars endures beyond statistics. Fragments of the virus’s ruin live in the letters family members wrote when visitations ended; in thousands of compassionate release applications denied; in news articles, poems, and drawings from those on the inside detailing desperation for fresh air and human contact, toilet paper, and empathy. Fragments of ruin in empty promises of decarceration; in lockdowns and isolation, the psychological consequences of which will not be fully known for decades.

Fragments of ruin that threaded through the dispatches and interviews of this Temperature Check series. Closing our year-and-a-half rapid response newsletter, in this final issue, we check up on the people, organizations, and advocacy efforts featured in Temperature Check’s previous 12 installments. What changes have been brought about during this period of acute disaster? And what work still needs to be done? We hope that this issue serves not only as a reflection on the past 17 months, but also as a springboard for rebuilding a post-COVID world that embodies our values.

The much-desired return to a post-pandemic “normal” is now rattled by a new layer of consciousness about the many forms of injustice and inhumanity within the United States’ legal system. The notion of public safety, for example, has been blown open by the eruption of carceral facilities as viral hotspots. As COVID spread through jails, prisons, and detention centers, those on the outside wondered, should we include the health and well-being of incarcerated individuals in our definition of “public safety”? Do we have an ethical obligation to protect the most vulnerable, even if it means releasing them from prison and challenging our beliefs—be they grounded in data or not—about the threat of decarceration to public safety?

Though decarceration efforts were sorely lacking—of the 31,000 federally incarcerated individuals who sought compassionate release, for example, only 36 were approved by the Federal Bureau of Prisons—25,244 people have been released from prison to home confinement since the onset of the pandemic. Though sensationalized in the news media, in truth, only three individuals were on record for committing new crimes, one of which was violent.

These statistics pose a direct challenge to the fundamental assertion of the American prison system; they indicate that public safety and incarceration are not one and the same, and that releasing incarcerated people does not in itself pose a threat to the outside community.

Yet now, over 4,500 of the 25,000+ individuals released to home confinement—many of whom settled down, rebuilt ties with children and parents and spouses, found a new job or a house, received necessary medical treatment that they lacked in prison—are at risk of returning to prison. On January 15, 2021, the Trump administration issued a memo saying that those whose sentences lasted beyond the “pandemic emergency period” would have to go back. Despite his campaign promises to reduce the legal system’s footprint and recent urging from lawmakers and advocates across the political spectrum, President Biden and his legal team have maintained the ruling. Once the official state of emergency ends, there are two ways to prevent these individuals from returning to prison if the ruling holds: Congress could enact a law to expand the Justice Department’s power, allowing them to remain under home confinement; or Biden could use his clemency powers to commute the sentences.

Biden’s decision presents a critical junction, a nexus where incarceration’s status quo meets the possibility of reform. The opportunity at hand, informed by the past 17 months, is to create a new normal that elevates empathy and restoration, to choose an alternative to incarceration that strives for the safety of us all.

As we move beyond the pandemic, and beyond Temperature Check, we urge you to look to the injustices that the pandemic has uncovered about life behind bars—the inadequacy of prison health care, the failure of compassionate release, the challenges of an aging carceral population, and many more—as fuel for continued change.

Thank you for spending these 13 issues with us.

Freedom Constellations is an interactive public art project that imagines a world where all youth have what they need to thrive and stay free. The banners, which can be seen from miles away, include an interactive augmented reality experience that illustrates a world where all youth are free in the clouds above city hall. The animation illustrates a collective poem co-created by youth organizers from RISE for Youth and Performing Statistics in Richmond, as well as dozens of youth organizers from across the country. View the full animation here. Photos by Mark Strandquist

Temperature Check An update on the state of vaccines in prisons

At the time we published Temperature Check Vol. 11, only 39 states included prisons in their vaccine rollout plan and only nine included them in phase 1. Now, as vaccines are widespread with abundant supply, only 49.3 percent of the United States is fully vaccinated. Public health officials are continuing to encourage people to get vaccinated as the delta variant surges around the globe—but what does this mean for incarcerated people, who have proven to be one of the most vulnerable groups to COVID-19?

These three pieces are from a larger series curated by Mahogany L. Browne, representing the new organization she helms as executive director, JustMedia, an open access, lens-based archive designed to assist and support advocacy efforts for systemic change through the art of storytelling. These works were also featured at Lincoln Center, as part of Browne’s groundbreaking role as poet-in-residence until the end of August 2021.

Where are they now?

Join us in celebrating some of the most exciting and life-shifting developments in the lives of our featured writers and guests: 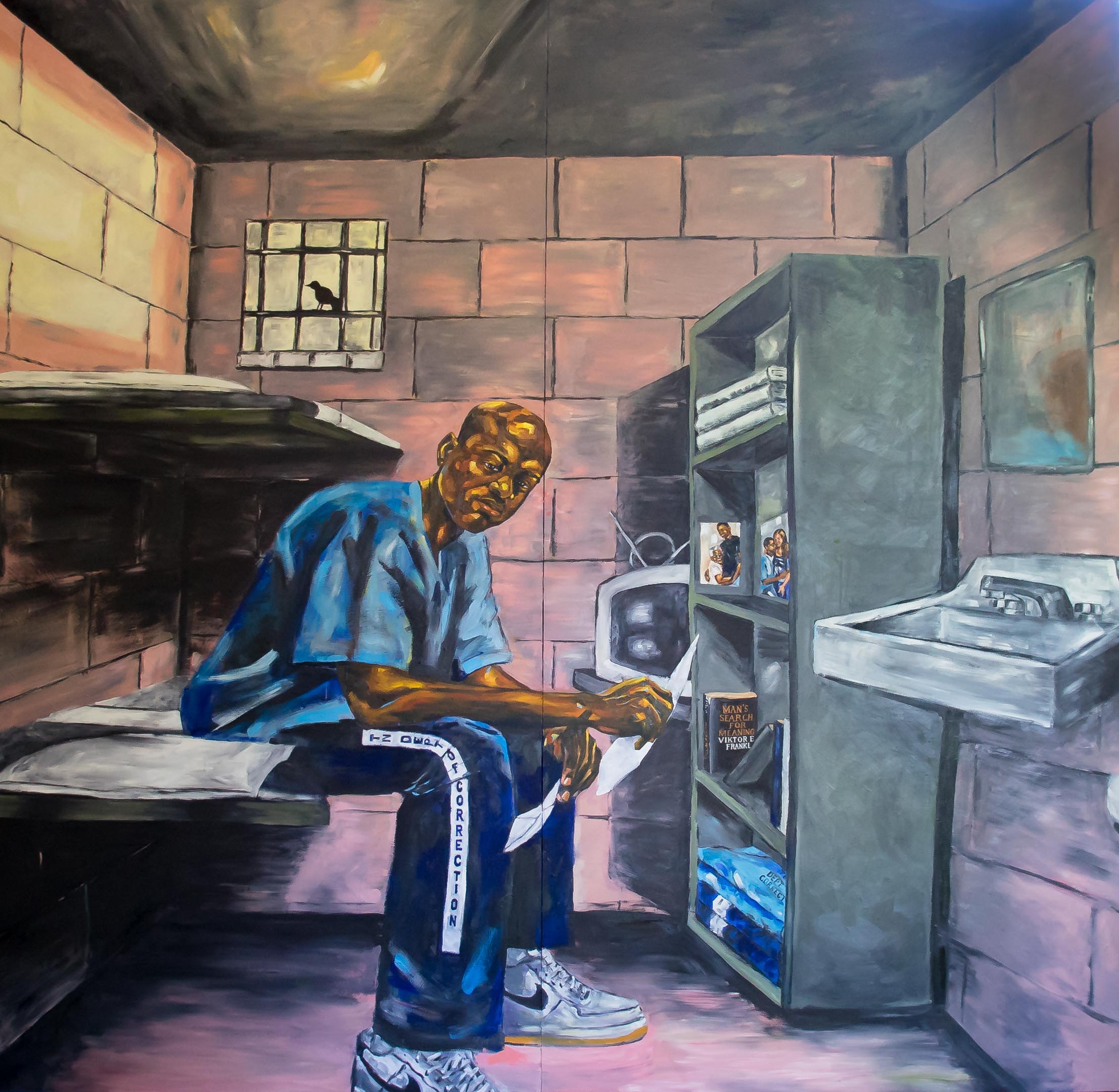 Where are we now?

What did the advocacy efforts we featured across Temperature Check accomplish, and where can your support still make a difference?

This selection of images are from the Time Saved vs. Time Served project. The original project, visioned by Tyra Patterson, who also serves as community outreach strategies specialist at the Ohio Justice & Policy Center, specifically highlights the uniforms women are forced to wear as a symbol for the many dehumanizing and unnecessary restrictions placed on women who are incarcerated. The multiple artists are all women who are directly impacted by incarceration. Patterson also shared her own piece as a reminder that “no matter where you are or no matter what you believe in, to always have hope, to bloom from the ashes, and always continue to shine.”

Temperature Check, Vol. 12: Prison Journalism in the Time of COVID-19

Join us on 10/1 for a #BannedBooksWeek conversation with @rofhiwabooks on the “Erasure of Black Thought”. Black academics @profblmkelley, @pornoscholar, and @daniellepurifoy will discuss the growing movement against the teaching of black history & racism. https://bit.ly/3nYQjVj

In this week's #PENTen, we spoke with award-winning essayist, poet, playwright, and film producer José Vadi (@vadiparty) about how his writing habits have changed, how family stories and community stories came together in his book INTER STATE, and more: https://bit.ly/3o281Hp.