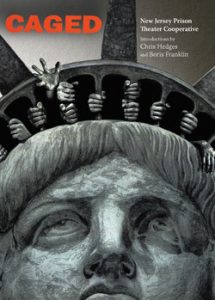 This is a house of grief.

In Caged, the playwrights of the New Jersey Prison Theater Cooperative stage the violence of injustice on a profoundly human scale. The play follows Omar Moore, a Black man returning to his family and his neighborhood after four years spent in the country with his son. As addiction and illness propel his parents deeper into poverty, Moore is caught between providing for his family, and protecting his younger brother and son from the drug trade. The world of the Moores is circumscribed by systematic violence, yet Caged never ceases to center the specificity, complexity, and mutual care of their interdependent relationships with one another.

Caged was born in a class on theater in a New Jersey maximum-security prison. When the minister, journalist, and activist Chris Hedges arrived to teach in 2013, he planned to focus on the work of Black playwrights like August Wilson and Amiri Baraka, and to familiarize his students with dramatic form through weekly writing exercises. Within weeks, Hedges found that the 28 men in his class were producing scenes of strength, sensitivity, and power worthy of the stage. The class formed the New Jersey Prison Theater Cooperative, and began to write their own play about the cages they had experienced both inside and outside prison walls. In 2015, one student, Boris Franklin, was released. He worked with Hedges to revise and edit the play into a cohesive script, which was performed by Passage Theater to sold-out audiences in May of 2018.

For Franklin, Caged revealed “that when you are a poor person of color in America you have one story.” The play points to the enormous political potential of finding a communal voice, and the artistic possibilities of intense and thoughtful collaboration. In the Caged script, more than 30 playwrights have built a work which sings out with one unified voice. But the effect is never flattening. The play’s individual characters are always three-dimensional, specific to themselves. The script introduces Jimmy, Omar’s father, with characteristic nuance and depth, “A junkie. Charming, quick-witted, and funny when he wants to be, he can also swiftly turn menacing, cruel, and frightening. It is clear in the way he carries himself that he is capable of violence.” Onstage, Jimmy is powerful and pathetic, protective and cruel. To his son, he represents failure and addiction, the ghost of a cycle which Omar is desperate to escape. To his wife, Jimmy is caring and desperate, a man who has lost hope, but refuses to stop loving.

While the play’s characters ring with authenticity, Caged never neglects its serious political messaging. The play illustrates Black lives in dialogue with a racist system, in which state power reinforces cycles of violence while moments of extraordinary integrity and bravery break through the cracks. Fifteen minutes before the play begins, a dimly lit stage reveals a barred cell. Inside, Shaky Brown, “a gifted blues musician serving a life sentence,” plays the blues. Throughout the play, his cell haunts the stage. Yet, his music—at once marginal and persistent, beautiful and full of grief—remains as well.

Claire Adler is an aspiring poet studying English at Barnard College. She is currently quarantining in Salt Lake City, Utah, where she spends her time writing, bread baking, and worrying about climate change. She is a former PEN America Prison Writing intern.