A Review of The Feminist War on Crime by Aya Gruber 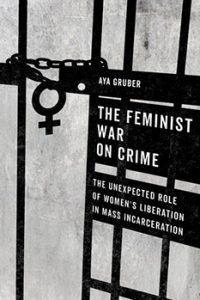 A Modern Feminist Reckoning:
A review of Aya Gruber’s The Feminist War on Crime: The Unexpected Role of Women’s Liberation in Mass Incarceration
by Sarah McEachern

In the pandemic era, we’ve seen advocacy surges for people detained at Rikers Island, who are denied hand sanitizer and soap while being paid $6 an hour to dig mass graves for coronavirus victims. Meanwhile, in another scene, after convicted rapist Harvey Weinstein tested positive for COVID-19 while incarcerated at Rikers Island, a flurry of tweets were cast in his direction. “Karma,” one said, while another read, “poetic justice.” Unlike Weinstein, the majority of the Rikers Island population have not yet been found guilty of a crime and are awaiting trial, often unable to pay bail.

Aya Gruber’s Feminist War on Crime connects the current sought-after solution for gender-based violence like domestic abuse, rape, and sexual assault to the root causes of another human rights crisis: mass incarceration. When working to eradicate gender-based violence, Gruber writes that militant feminists often “characterize crime as an exclusive product of individual monstrous men who prey on vulnerable women and need to be caged away from society”—ostensibly, people like Weinstein—through tactics like over-policing, aggressive law enforcement, and mandatory minimum sentencing. Gruber offers a sweeping critique of this catch-all campaigning, starting with first-wave feminism’s desire to end domestic violence at the start of the early 19th century through today’s feminist movements like the #MeToo movement and initiatives to end campus sexual assault.

Gruber asserts that feminist activism happens in a vacuum of patriarchy, and in order to find traction in a societal system set against women, combating violence often resorts to stereotypes of perfect victims and idealized womanhood. Instead, Gruber advocates for neofeminism, a more nuanced, intersectional approach that takes into account how “the criminal system generally punishes the poor and the powerless and is particularly impotent to dismantle entrenched power structures. Understanding that policing, prosecution, and punishment are largely fixed institutions, with embedded authoritarian and racialized features, shatters the illusion that throwing criminal law at the gender issue du jour is an exercise in gender justice.”

Throughout the book, Gruber examines several feminist movements and their crusades to end gender-based violence, which push the movement toward over-policing and legislation loopholes. The strongest example provided upends the approach to campus sexual assault, which has led to redefining consent from “no means no” to “yes means yes.” Though this change allows a broad legal definition of nonconsensual sex, Gruber argues that it doesn’t strike at the ingrained and culturally-sanctioned reasons for its occurrence. She writes, “At this very moment, someone is getting arrested, being charged, or going to jail for failing to obtain the requisite authorization for sex. The offender will go to jail, and young people will continue to engage in gendered sexual communication where men are aggressors and women are gatekeepers.” Instead of striking at the heart of the issue, the movement created a more malleable legal framework in the misguided and incomplete hope that justice will be dispatched through a corrupt system.

In The Femimist War on Crime, Gruber argues, “Feminists should focus on the cultural, social, and economic circumstances that underlie crimes against women, including patriarchy and sexism,” with the belief that gender-based crime is best eradicated through a more equal society built from the ground up—and unequal systems should be completely disassembled.

The arguments in the book about feminist-led solutions to gender-based violence leading toward mass incarceration are convincing, but I didn’t feel like enough sweeping alternatives were suggested for many survivors of gender-based violence to feel comfortable totally replacing the systems in place, even if flawed and harmful. Ultimately, neofeminism convinced me of its capability to develop radical solutions that resolve inequities. For readers drawn to books about mass incarnation, Gruber’s book contributes to books like The New Jim Crow and Locked In in offering a full picture of the crisis at hand and how it was created.

Additionally, The Feminist War on Crime will no doubt attract an audience of readers interested in learning about the problematic history of feminist movements and its continuing work to become intersectional and more effective for all types of women. With a renewed interest in feminist political action after the 2017 Women’s March—which served as a first dalliance into political activism for many previously comfortable women, and was a precursor to the #MeToo movement—this book offers another issue that modern feminists must reckon with. When reading, I wished for a more cohesive history of feminism with regards to how the movement has worked to repair past missteps—if it indeed, has. In particular, Gruber misses a great opportunity to write about first-wave feminists’ schism over where voting rights for nonwhite citizens should fit within the movement’s push for women’s right to vote, which exposed the racist arguments of lauded feminist heroes like Susan B. Anthony.

While the picture of the feminist movement could be expanded to see its past successes and failures at reorienting itself, on the whole, Gruber offers an exciting and brave book that tackles the cause and effect between gender-based violence, mass incarceration, and a broken legal system.

Sarah McEachern is a reader and writer in Brooklyn, NY. Her recent work has been published in FIVE: 2:ONE’s #thesideshow, Potluck Mag, The Menteur, The Automata Review, Entropy, Catapult, and The Spectacle’s The Revue. She serves on the PEN America Prison and Justice Writing Committee.