To receive this series straight to your inbox, sign up here.

Today would have been award-winning EMT and essential worker Breonna Taylor’s 27th birthday. 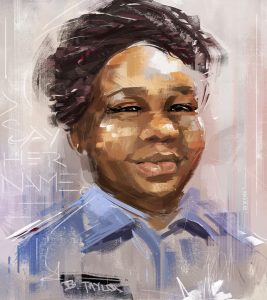 And instead of celebrating Breonna’s important contributions on the frontline of the pandemic, there is a nationwide call to bring justice to her name. In the wake of Breonna’s murder, we chorus the demand to arrest the police officers who shot her 8 times during an illegal drug raid while searching not only in the wrong house, but for a man whom police had already arrested earlier that day.

The list of names has become a litany: Ahmaud Arbery, Breonna Taylor, George Floyd. Around the country and around the world, the chant resounds, “Say his name, say her name.”

And there are thousands more whose individual, important and specific names and lives we have not learned, nor said aloud.

The United States is boiling at the intersection of—as our Works of Justice podcast guest Gloria J. Browne-Marshall so clearly names it—two insidious and terrorizing diseases: the recent pandemic and chronic white supremacy. The police are often the entry point to a sprawling criminal justice system, linked intricately to the brutal history of slavery and the subjugation of Black people in the United States.

And the two diseases will only become more entwined. The same force that allows for the murder of Black people at the hands of police is the same force that incarcerates Black and Brown people at significantly higher rates than white people, which is also responsible for the higher rate of infection and death from COVID-19.

In this issue, we center the work of three incarcerated Black writers who offer emotional, policy, and historical perspectives on mass incarceration.

Spoon Jackson’s stirring poem echoes through history, rejecting respectability politics and renouncing America in the refrain, “I pledge no allegiance / to this flag / and free / I let my pants sag.”

Lacino Hamilton calls for incarcerated people’s participation in policy change to be more than “periphery roles where we were more like props than principles.”

And Santonio Murff invites us into “an uncomfortable subject matter for most, and is highly emotional for others,” encouraging us to stay the path, following his historical map, “so that you can understand that our criminal justice system is not in need of mere reforms, because it’s not broken.“

Litigation, legislation, and protest are the ingredients for change that Gloria J. Browne-Marshall, civil rights attorney, author, and professor of constitutional law at John Jay College of Criminal Justice extends to include the role of the artist on our latest Works of Justice podcast—among the most powerful offerings we’ve ever had a hand in shaping. As colleagues, friends, and family grapple towards contribution and understanding in this global call to action to dismantle the pervasive anti-Blackness that riddles every aspect of American life, I invite you to listen with a close ear to Gloria’s wisdom and message—and share it widely.

As a valued member of our Prison Writing Committee, Gloria also helped curate and bring voice to next week’s partnership with Haymarket Books, A STRONGER DESIRE TO LIVE (June 11th, 5pm EDT). This emotionally stirring 90 minute podcast performance draws together a roster of powerful artists standing in to voice a tremendous series of prose, poetry and drama works penned by award-winning incarcerated writers. We invite you to join us.

At the bottom of this issue, you’ll find various entry points to engage. After you read and listen, you’ll feel, I am certain of it, moved to immediate action.

Speaking Truth to Power Through Poetry

How do I hold my temper
keeping my grace
and not become bitter
stuck in this infamous place?

I remember even at seven
I dreamed of a better place
a better race
than the human race.

I am the little black
boy’s soul
taken from its mother’s
bosom and sold.

While the old ones still
linked to Africa kill
the white ones with their head
down and eyes closed.

unafraid of any gunner
I am Martin Luther King, Kr.
shot down on the balcony
in the midst of his dream.

without a trace
only a history of misery
and indentured slavery.

hero of the brave.
I am Emmett Till, hung
from an old beautiful
southern willow tree.

Centering Incarcerated People’s Contributions in Our Reform and Abolition Movements

Both the reform and abolition movements over the past few years have succeeded in challenging some of the most glaring abuses of the criminal justice system. For example, a Supreme Court victory striking down sentencing juveniles to life without parole and the gradual elimination of money bail. Yet, incarcerated citizens were largely excluded from participating in those challenges in substantial ways. At best we played periphery roles where we were more like props than principles. Our truths and insights about incarceration, our alternative visions of what is possible were mostly suppressed, and when they weren’t they were presented using someone else’s words and someone else’s voice. I do not believe those roles were maliciously assigned, it is just common sense in some circles that incarcerated citizens, given the whole situation of economic, social, and political domination, complicates critical awareness and response. But what may appear common sense to some people is actually a form of paternalism.

Excerpt from Santonio Murff’s
Mass Incarceration: The Shame of a Nation

I know race relations is an uncomfortable subject matter for most, and is highly emotional for others, but we had to take that short sojourn so that you can understand that our criminal justice system is not in need of mere reforms, because it’s not broken. This new criminal injustice system is doing exactly what it was designed to do; exactly what Jim Crow and slavery did before it. Mass incarceration, the new tool of control, is permanently locking a huge percentage of Blacks out of mainstream society; not only physically for a time, but also economically and politically, even after they are released from the new institutions and prisons.

And, yes, having been moved from the auction blocks to the stock markets, huge profits are still being made for the few at the expense of the multitudes.

As Michelle Alexander explains in The New Jim Crow, “The emergence of each new system of control may seem sudden, but history shows that the seeds are planted long before each new institution begins to grow.” Richard Nixon only planted the seeds, testing the soils of bigotry for President Ronald Reagan to declare our current war on drugs, which many credibly argue is no more than a war on Blacks, with a nominal amount of room for poor whites to also be sucked up by the complex prison industry.

The success of a multitude of Blacks in this same period in no way negates the argument, because, as sociologist Loic Wacquet puts it, “With each reincarnation of the controlling system, it is less total, less capable of encompassing and controlling an entire race.”

Yes, the 13th Amendment did abolish slavery, but it left an often ignored loophole: Slavery to this very day is perfectly legal and appropriate for those convicted of a crime. It is that exception which was seized upon by the evil minds who redesigned what was touted as the best legal system in the world, rendering it the most embarrassing of any civilized, democratic nation on the planet.

There should not be any confusion here. The conspiracy is clear and evident for those with eyes to see; but so, too, are the smooth calculations, and numbers do not lie. Some numbers, also, are too shameful to dismiss as chance. Let us take a look at them with open eyes and hearts that are unafraid to embrace the ugly truths about ourselves and our country. Only then can we right our footing once again, and keep stepping together through the darkness, fears, and greed into the light of liberation. 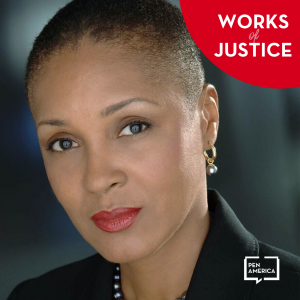 Among the many notes of wisdom in this conversation with our Prison and Justice Writing Program manager Robbie Pollock, Gloria J. Browne-Marshall contextualizes the history of systematic murder of Black Americans at the hands of the law, and offers a holistic and inciting call to action around reconciling white privilege and being in right allyship with Black Americans in this critical moment and beyond.

Gloria is a valuable member of our Prison Writing Committee whose extensive biography includes her work as an award-winning civil rights attorney, a highly-regarded author of numerous books, writer of articles and plays, a sought after legal commentator, and a professor of constitutional law at John Jay College of Criminal Justice (CUNY).

Listen to the half hour-long conversation on our Works of Justice podcast:

We understand the call to action is both dynamic and shifting moment to moment. When responding to the call for urgent action, here are a few starting points: