In this week’s Illustrated PEN, Guest Editor Whit Taylor presents an excerpt from MK Czerwiec’s Taking Turns: Stories from HIV/AIDS Care Unit 371, believed to be the first graphic memoir created by a nurse.

Taylor writes: MK Czerwiec’s Taking Turns: Stories from HIV/AIDS Care Unit 371 is a graphic memoir about her time working as a nurse on an HIV/AIDS care unit in the early to mid 1990s, told through her recollections as well as the oral histories of patients, family members, and staff. Czerwiec’s time on the unit saw her dealing with the peak of the HIV/AIDS epidemic as well as the steep drop-off in patients and eventual closure of the unit following the use of antiretroviral protease inhibitors.

I chose this piece because I think it is particularly skillful in its exploration of the uniqueness of her unit and its place in the HIV/AIDS epidemic, her experiences as a healthcare provider, and her depiction of patient narratives. More so, Czerwiec infuses her work with a complex perspective on end-of-life issues, the power of using community to fight stigma, and her great compassion for the patients and providers who made a home on Unit 371. 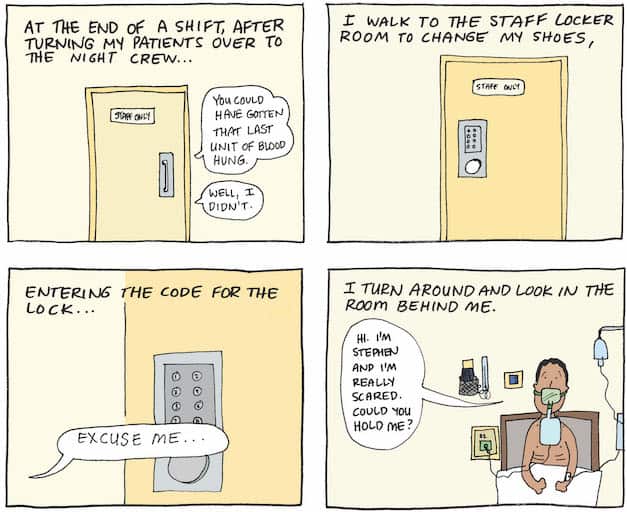 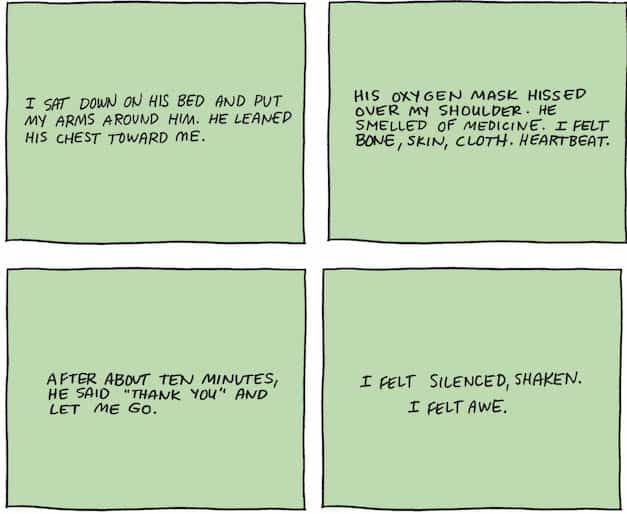 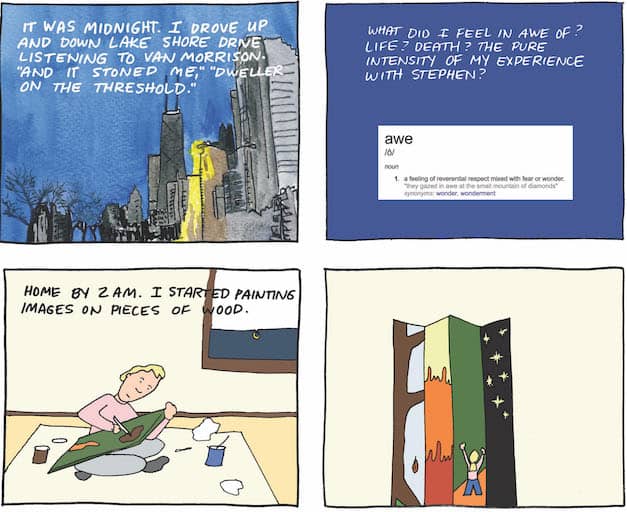 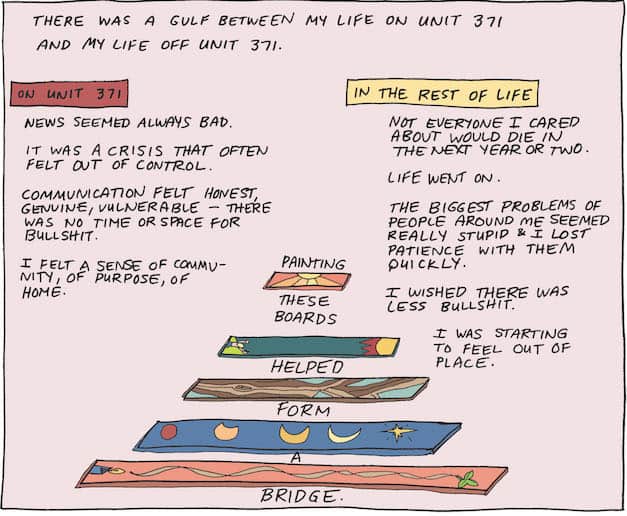 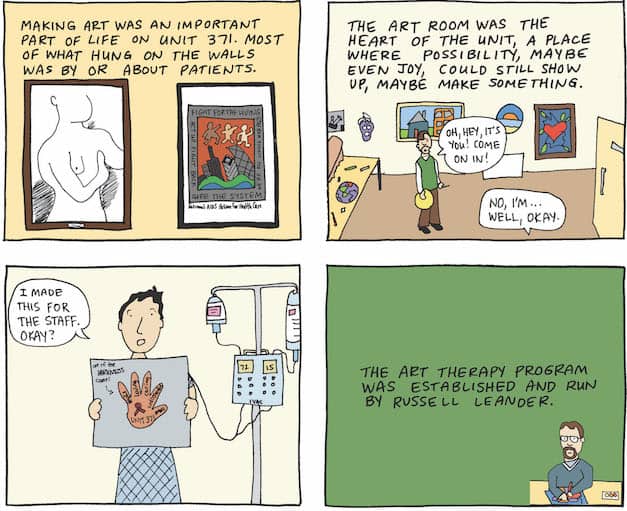 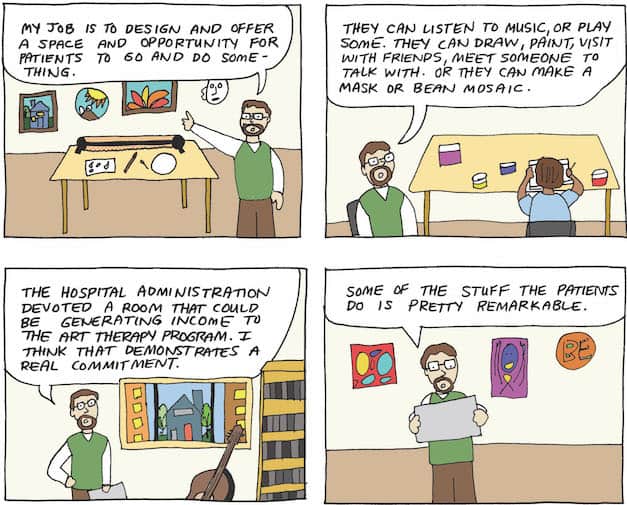 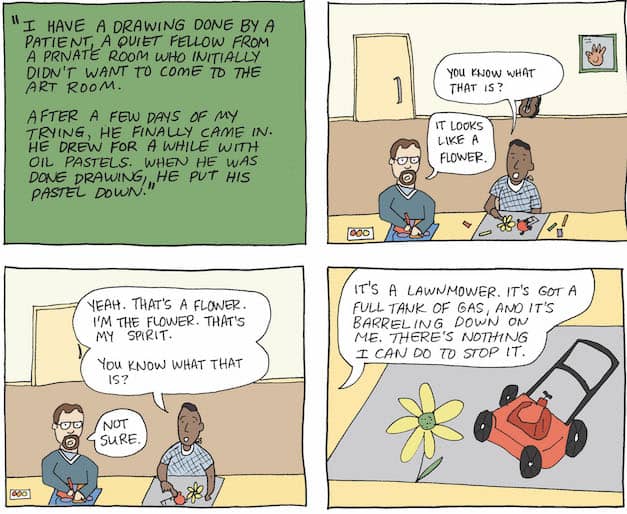 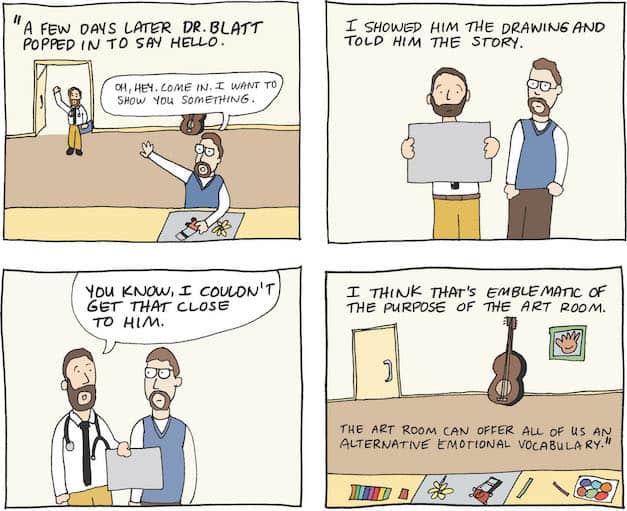 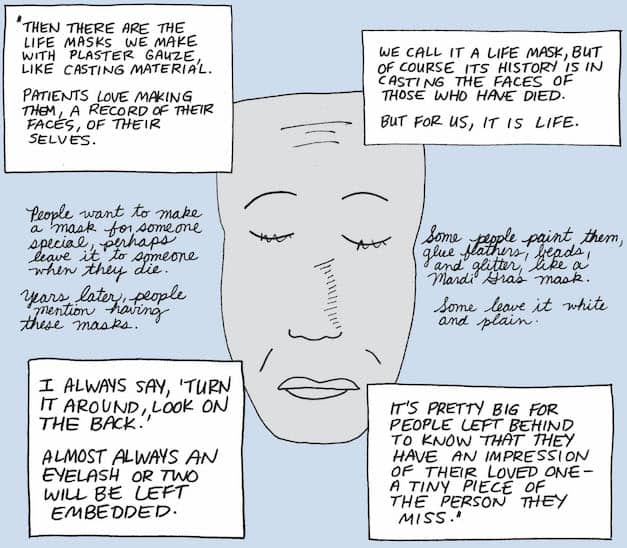 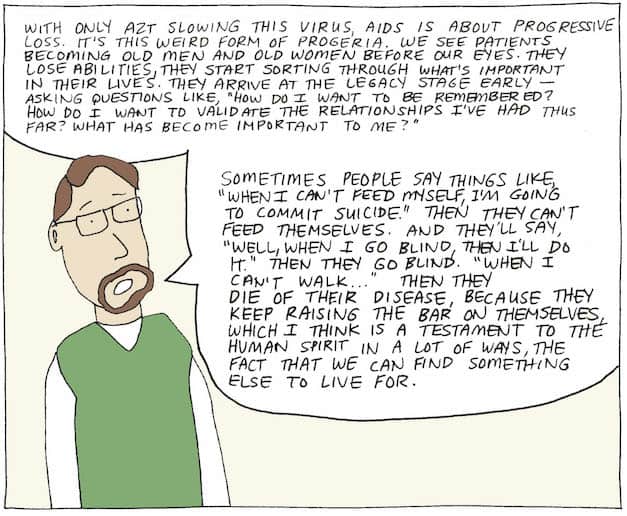 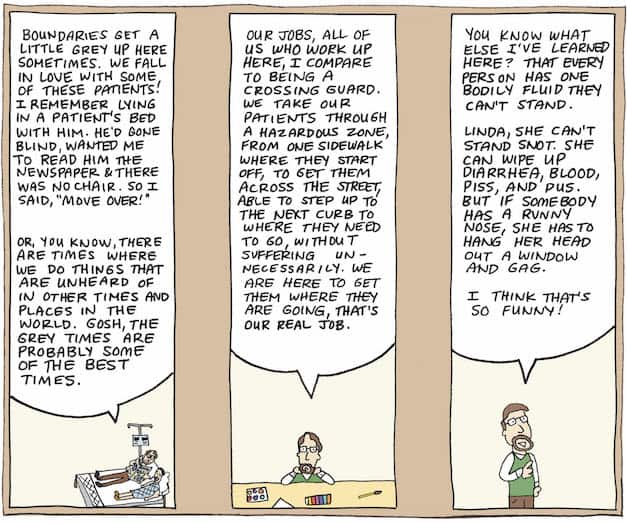 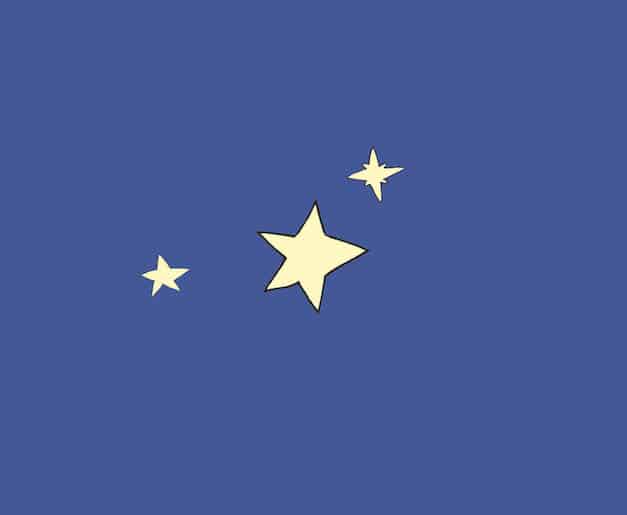 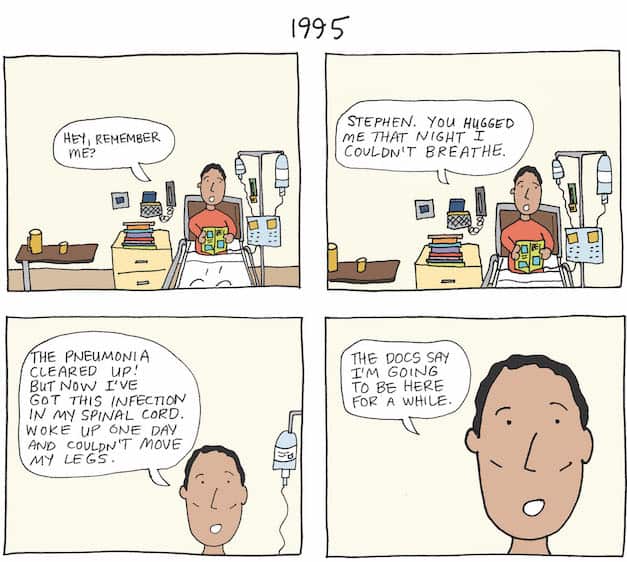 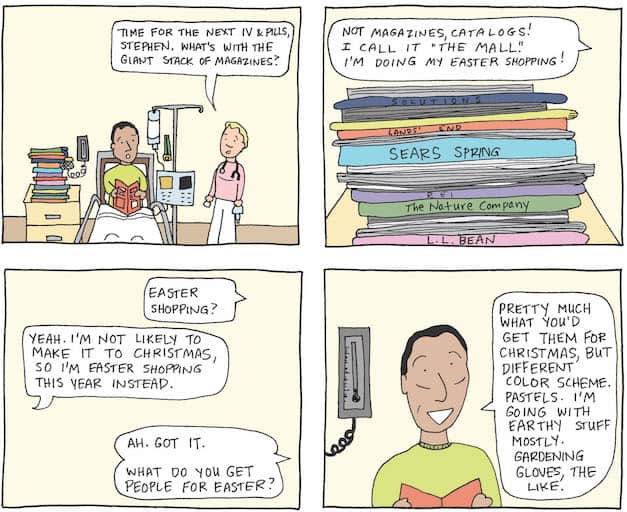 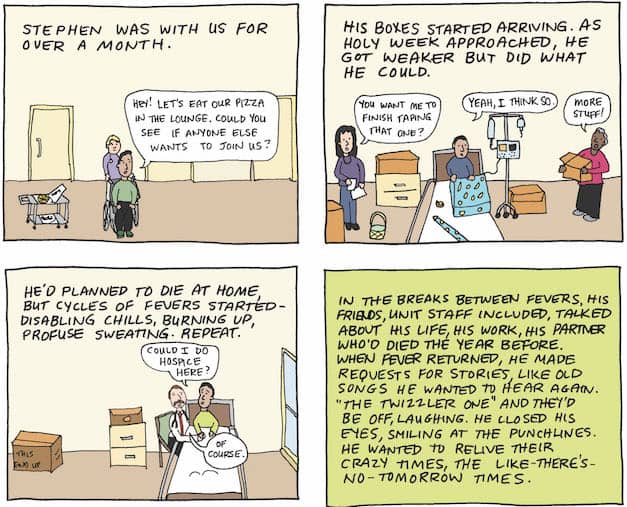 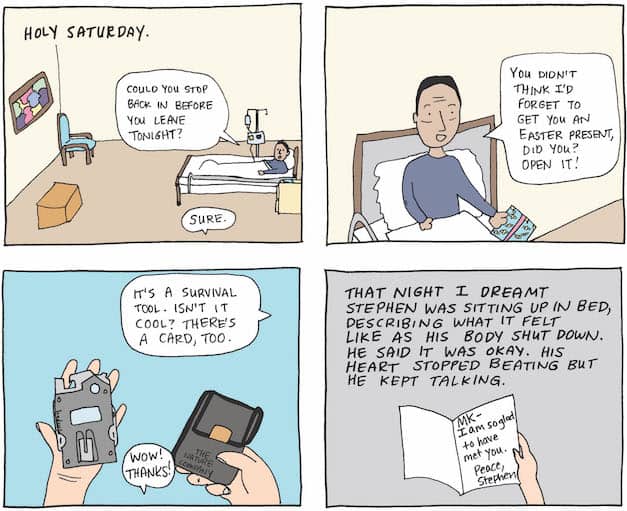 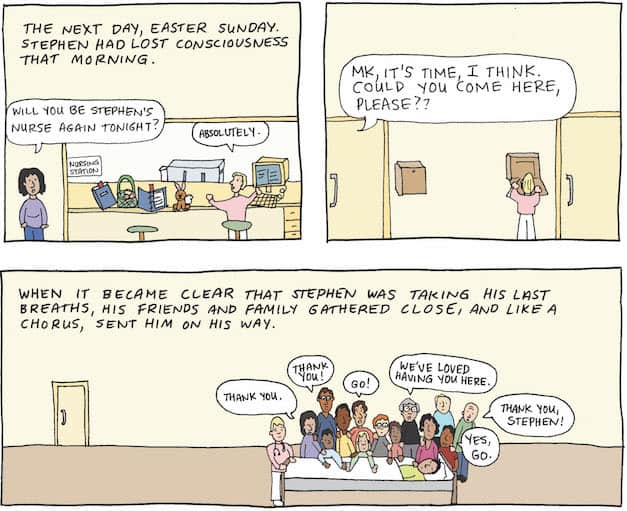 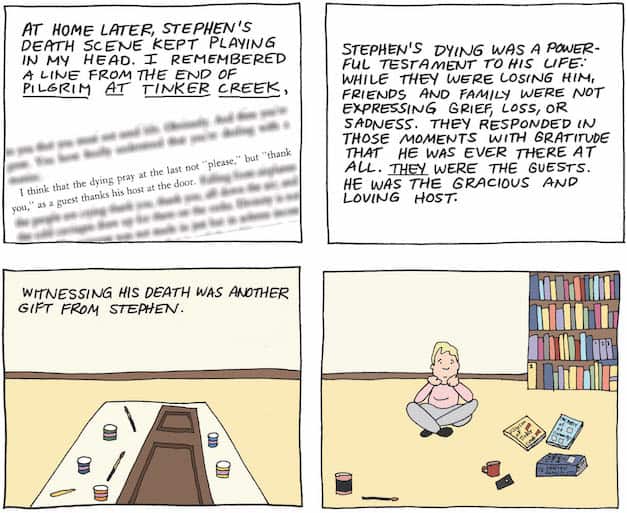 MK Czerwiec (pronounced sir-wick) is a Senior Fellow of the George Washington School of Nursing Center for Health Policy and Media Engagement and the Artist-in-Residence at Northwestern Feinberg School of Medicine. She has a BA in English & Philosophy from Loyola University of Chicago, a BSN in nursing from Rush University, and an MA in Medical Humanities and Bioethics from Northwestern University. Her clinical nursing experience is in HIV/AIDS care and hospice care. MK has been making comics under the pseudonym Comic Nurse since 2000. With UK physician Ian Williams, she co-runs Graphic Medicine, a website devoted to the intersection of comics and health.

Her first graphic memoir, Taking Turns: Stories from HIV/AIDS Care Unit 371 (Penn State University Press, 2017), is believed to be the first graphic memoir created by a nurse. She is also a co-author of the Eisner Award-nominated Graphic Medicine Manifesto (Penn State University Press, 2015), which maps the field of Graphic Medicine.

The Structure is Rotten, Comrade

As Chinese people frustrated by severe Covid lockdowns have taken to the streets, experts say the sheer volume of video clips on sites such as WeChat and video sharing app Douyin has likely overwhelmed the armies of censors policing the internet in China. https://www.nytimes.com/2022/11/30/business/china-protests-censorship-video.html?unlocked_article_code=pUzXt8k6zoNFES-Q2AI3xyDJJQUAVTtOW4dOkwpUAuUlDcSl8mBltmIQtaSrGyDDXlwWUDVmquVeXzPO1CSgWUZZNjEo9jGpoCCqrG0VaTcN_OEa5GNnJnEvX7AGSz4aASFno3AbDwjew564BvwFiuAlMhuq7V-N_Y0gid9V7BQR6P7LavuuVRvu_Fnr8srWhN_kq728yYV38iZSI3qersN1c5h_Ern2r0FPE2zgTljChRV4YxP8LlZNS3YZ7dvzxe3QKSl5Ycz_v7_T08cdukFIU8HjRvSvh1WiznWlduB6ULLk7AIugO-dmZBidJbdK6LQkhzYYWaCN2tMLf10zF785PThxxbverI∣=tw-share

We are relieved to see writer #AnandTeltumbde released on bail in India after 31 months in pre-trial detention for his #FreedomToWrite. He should never have been jailed in the first place.
https://scroll.in/article/1038464/will-the-bail-granted-to-anand-teltumbde-help-others-in-the-bhima-koregaon-case-to-get-out-of-jail

Digital rights in #Vietnam are declining as a new system of surveillance and control has emerged in the country, with the support of Western tech giants. https://thediplomat.com/2022/11/the-quiet-evolution-of-vietnams-digital-authoritarianism/