The Structure is Rotten, Comrade

For this week’s Illustrated PEN, we are pleased to present an excerpt from the graphic narrative The Structure is Rotten, Comrade, by Viken Berberian and Yann Kebbi. From LEGO bricks to cement, Frunzik’s love for building and design leads him from Paris to Yerevan, a city in the process of reinventing its urban structure; however, its denizens are outraged at the destruction of the city and the erasure of its history, as well as the removal of many from their homes. And Yerevan is soon on the verge of a revolution.

The graphic novel was originally published in French by Actes Sud with editors Thomas Gabison and Michel Parfenov. English translations appear below their corresponding panels. 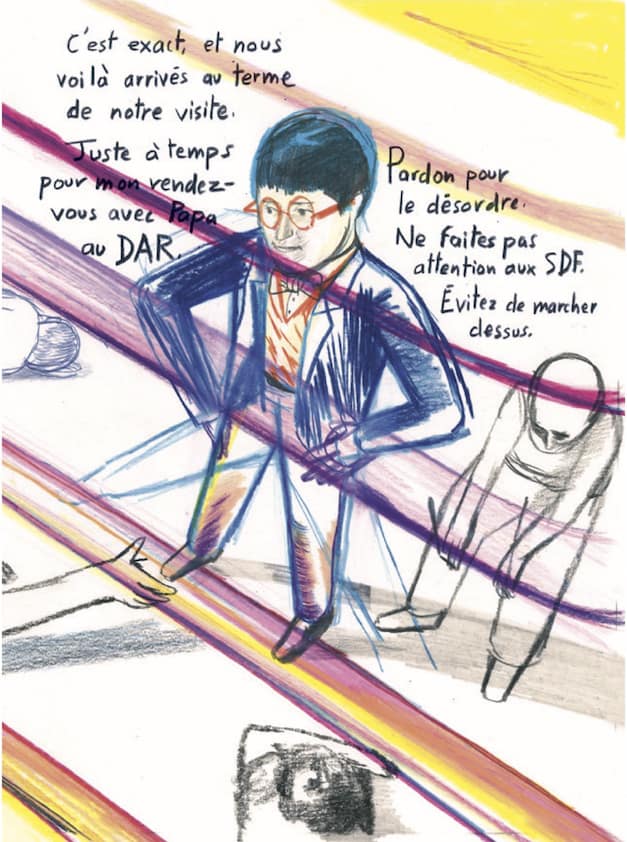 Frunzik: “That’s right, and that brings us to the end of our walking tour. Just in time for my appointment with dad at RAD. Apologies for the mess. Don’t mind the homeless. Be careful not to step on one.” 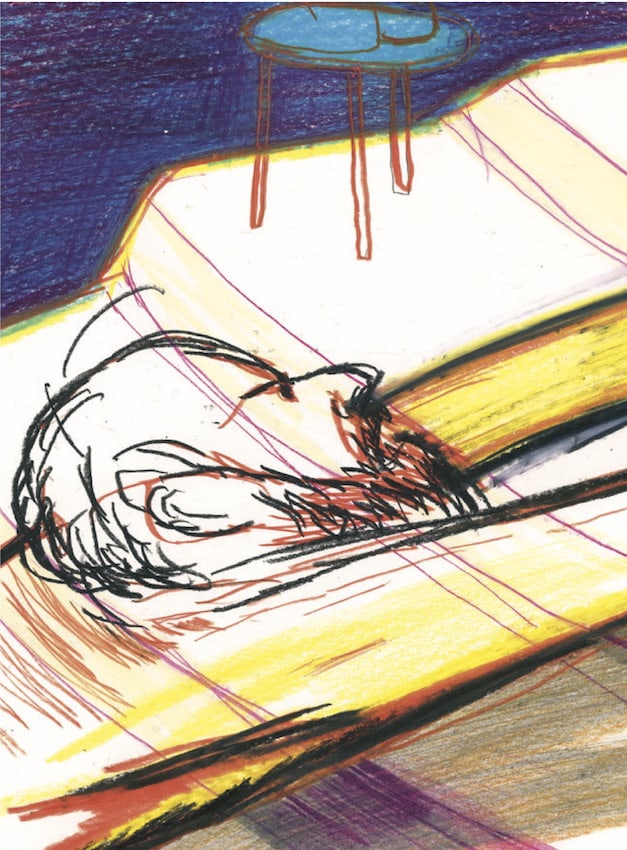 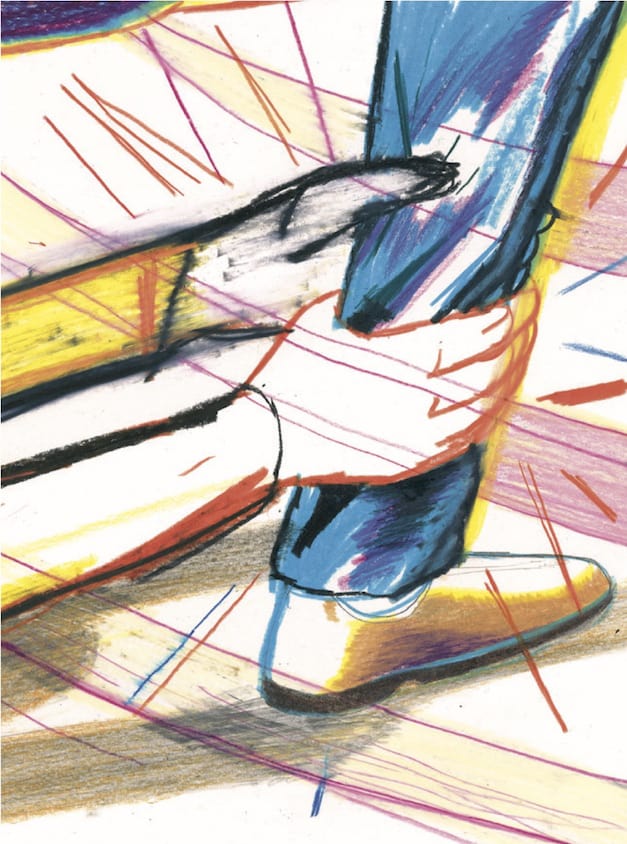 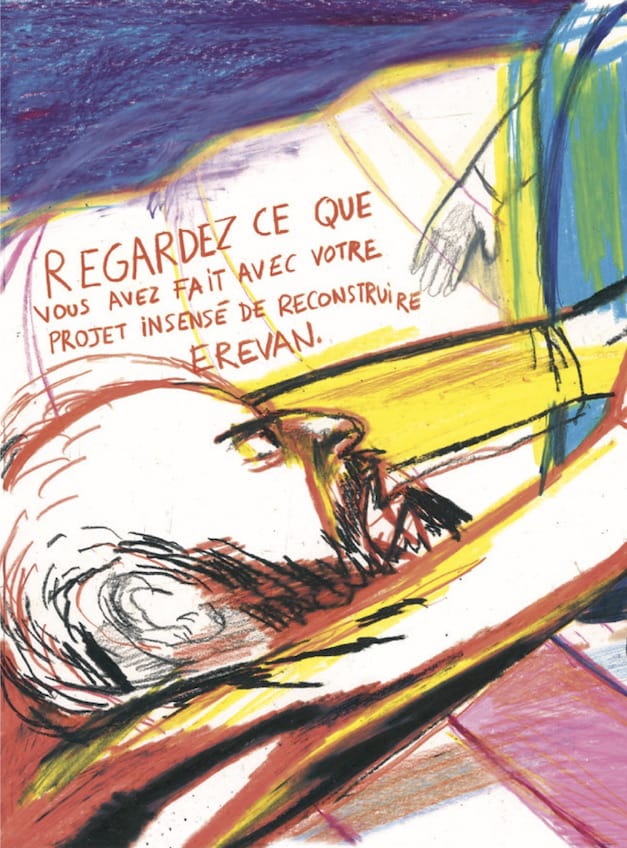 Homeless Man: “Look what you’ve done with your crazy plan to redesign Yerevan.’’ 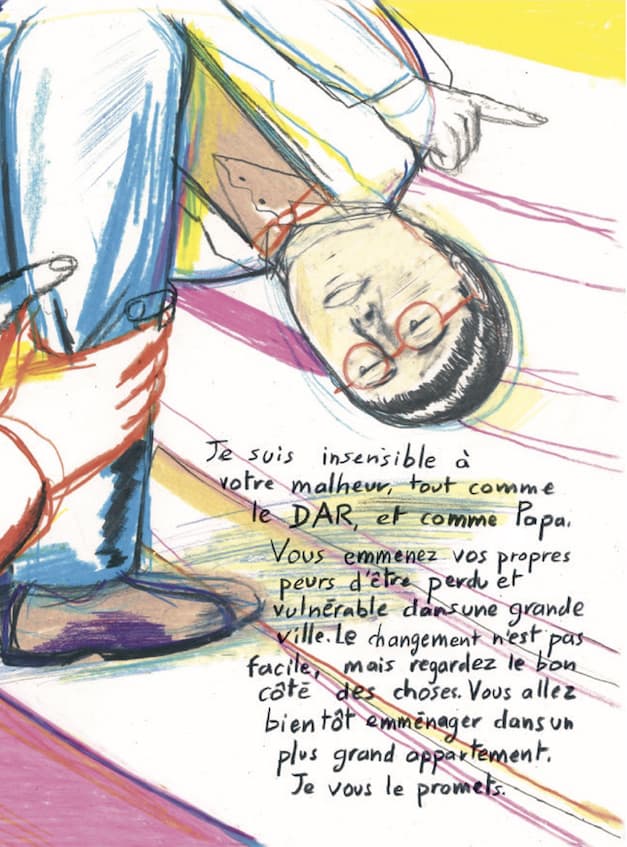 Frunzik: “I’m sensitive to your plight, so is RAD, and so is dad. You convey something of our own fears about being lost and vulnerable in a big city. Change is not easy, but look on the bright side: You’ll soon move into a bigger apartment. I promise you that.’’ 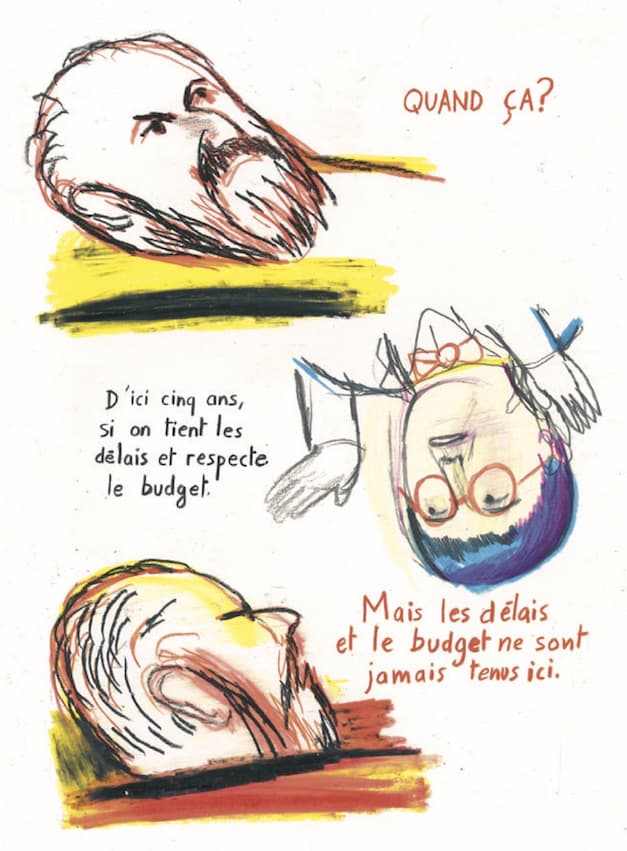 Frunzik: “In five years, if we’re on time and budget.”

Homeless Man: “But nothing is ever on time and budget here.’’ 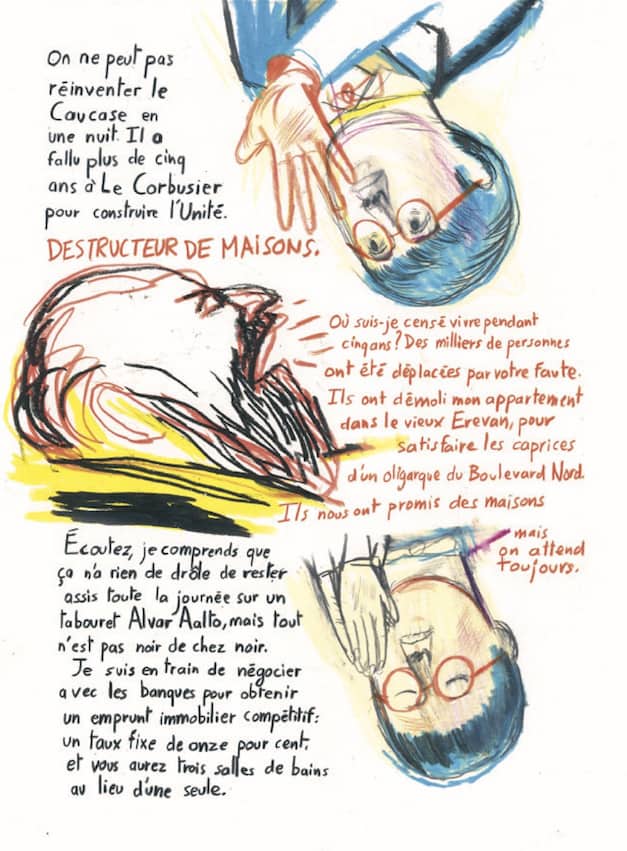 Frunzik: “You can’t reinvent the Caucasus overnight. It took Le Corbusier more than five years to build the Unité.’’

Homeless Man: “Destroyer of homes. Where am I supposed to live in the next five years? Thousands have been displaced because of you. They demolished my apartment in Old Yerevan to satisfy the whims of an oligarch on Northern Boulevard. They promised us homes and gave us nothing.’’

Frunzik: “I realize it’s no fun sitting on an Alvar Aalto stool all day, but it’s not all doom and gloom. I’m negotiating with the city banks to offer you a competitive mortgage: 11 percent fixed rate, and you’ll have three toilets instead of one.’’ 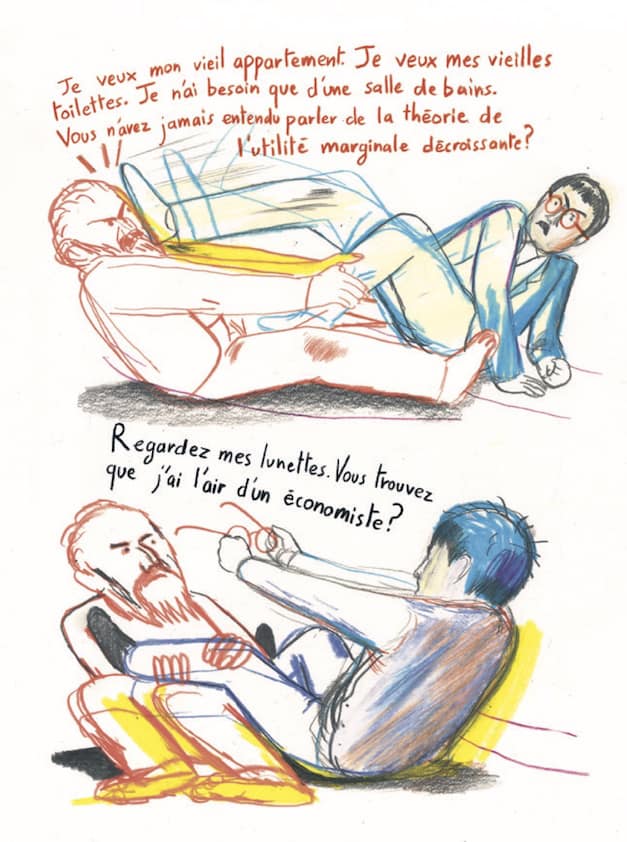 Homeless Man: “I want my old apartment. I want my old toilet. I don’t need more than one bathroom. Haven’t you heard about the theory of diminishing marginal utility?’’

Frunzik: “Look at my glasses. Do I look like an economist to you? 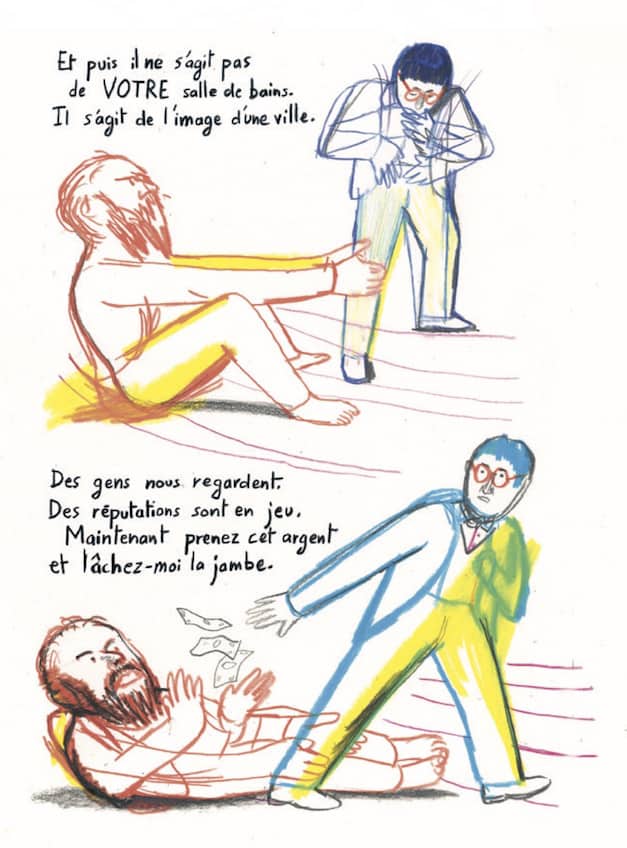 Frunzik: “And this isn’t only about YOUR bathroom. This is about the image of a city.

“There are people watching. There are reputations at stake here. Now take this money and Let. Go. Of. My. Leg.” 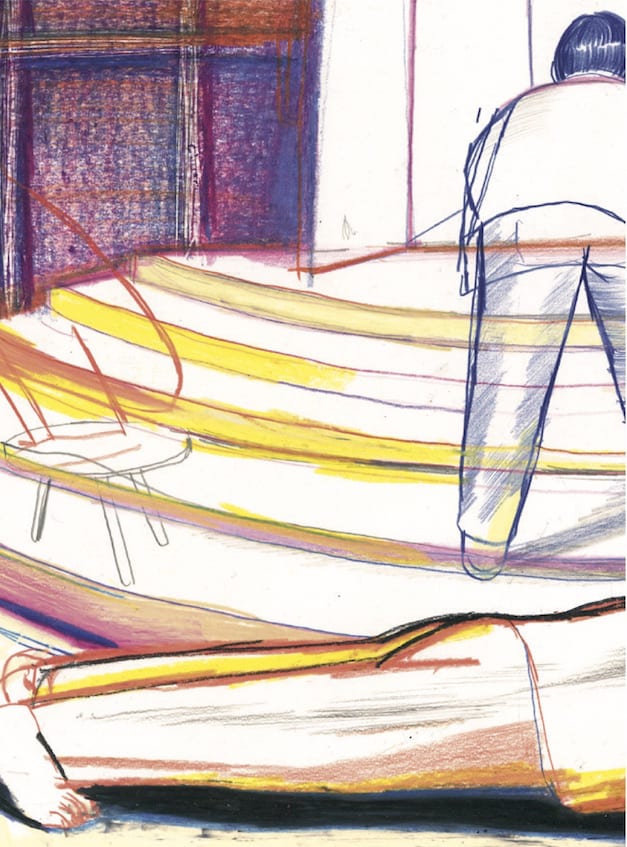 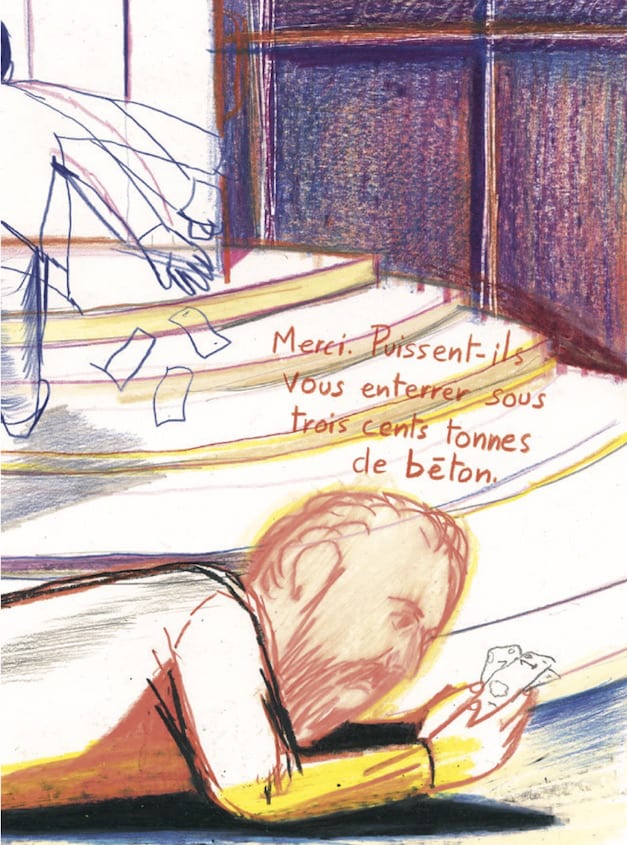 Homeless Man: “Thank you. May they bury you under three hundred tons of cement.’’

Viken Berberian’s work has appeared in The New York Times, The Believer, the International Herald Tribune, Bomb, the Financial Times and the Los Angeles Times. Berberian is the author of the novels The Cyclist (Simon & Schuster) and Das Kapital: a novel of love & money markets (Simon & Schuster). His graphic novel, La Structure est Pourrie, Camarade (Actes Sud), with illustrator Yann Kebbi, was published in France earlier this year. Le Monde described it as “hilariously funny and violent.” Berberian’s fiction has been translated to Dutch, Hebrew, French, German, and Italian. You can read his short story, The Mattress, in the autumn 2017 issue of Bomb.