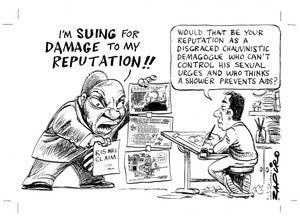 We’re thrilled that South African President Jacob Zuma has dropped his lawsuits against Zapiro, a prominent cartoonist and member of South African PEN, and various media outlets. The 14 lawsuits, which totaled some R60 million (roughly $10 million), accused leading newspapers and individuals of defamation.

In an official statement, the President’s office explained that Zuma “was informed by the broader agenda of reconciliation and nation building which the President leads in Government. Equally, the President is committed to redressing prejudice and inequality through government-led programmes and forging better working relationships with like-minded interest groups committed to this end.” However, the President had won only one lawsuit, according to Yahoo! South Africa, a R50,000 settlement for a defamation claim against a newspaper, and it was possible he would not have prevailed in another. The largest single claim of R7 million was filed against a radio DJ who had written a parody song entitled My Name is Zuma.

Zapiro is the most celebrated political cartoonist in South Africa, and has explored the complex issues of race, class, and social justice of the post-apartheid era in his work, often through biting lampoons of public figures.  After being acquitted of rape charges in 2006,  Zuma sued Zapiro for R15 million in three separate lawsuits and added a fourth lawsuit for R7 million for his 2008 Rape of Lady Justice cartoon, which depicted Zuma preparing to rape the justice system with the help of his political allies. Zuma was elected President in 2009 and his time in office stands in stark contrast to that of Nobel Laureate and former President Nelson Mandela, who largely embraced free expression and critical debate.

We heard from Vice President of South African PEN, Raymond Louw on the matter, who wrote:

Because of the volume of the claims and President Zuma’s reluctance to pursue them in court—he failed to respond to defense legal demands—journalists and lawyers accused him of using the courts to intimidate the media, but the media refused to buckle and insisted the cases would be defended.

Louw went on to explain that even though the suits have been dropped, they still cost the media outlets significant amounts of money:

President Zuma was said to have personally paid the legal costs he incurred in bringing the cases against the media. However, the media paid the costs they incurred in preparing to defend the cases he brought against them. There has been no indication that any of them intend to sue the President for those costs.

Because of the volume of the claims and President Zuma’s reluctance to pursue them in court—he failed to respond to defense legal demands—journalists and lawyers accused him of using the courts to intimidate the media, but the media refused to buckle and insisted the cases would be defended. – See more at: https://pen.org/blog/south-african-media-welcomes-zuma%E2%80%99s-withdrawal-r12-million-libel-actions-against-them-though#sthash.ZNOHgmhO.dpuf
In 2006, when his rape trial ended and he was acquitted, he sued seven or eight entities, including myself, for a total R63 million (roughly $9 million in 2006), and I was sued for R15 million (roughly $2.15 million) of that amount.  – See more at: https://pen.org/activist-heart-conversation-south-african-cartoonist-zapiro#sthash.9NhbErcs.dpuf

South Africa is currently grappling with a number of free expression issues. In 2011, the government introduced the so-called Secrecy Bill, which would impose criminal penalties for classified information that was leaked in the public interest, among many other flaws, and PEN American Center worked closely with South African PEN to oppose the bill through advocacy before the United Nations Human Rights Council. Unfortunately, a revised text of the bill recently passed both houses of Parliament and may be signed into law by President Zuma. South African PEN and other civil society groups, including the Right2Know campaign, are currently considering a challenge to the legislation in the Constitutional Court.

Click here to view our annotated retrospective of Zapiro’s most famous cartoons.