Some Good News from the OAS 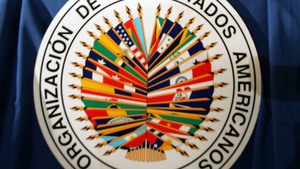 We were happy to get the news last week that the Organization of American States (OAS) has turned back an effort led by Ecuadoran president Rafael Correa to weaken the Inter-American Commission on Human Rights and the IACHR’s Special Rapporteur on Freedom of Expression—two human rights organs that have played a vital role in protecting and expanding freedom of expression in the Americas.

In a vote at an extraordinary session of the OAS General Assembly in Washington last week, 35 member states approved by acclamation a resolution that will allow the Special Rapporteur’s office to seek independent funding and to continue issuing its annual reports on free expression throughout the hemisphere. The vote amounted to a decisive rejection of an effort by the so-called Bolivarian Alliance for the Americas (ALBA) countries, which include Ecuador, Venezuela, and Cuba, to hamstring the office and the IACHR as a whole following rulings that have criticized free expression violations in those countries.

Created in 1959, the Inter-American Commission on Human Rights played a key role in documenting abuses carried out by repressive regimes in Central and South America in the 1970s and 1980s, and the Office of the Special Rapporteur for Freedom of Expression, which was created in 1997, has emerged as a key defender of writers and press freedom in the Americas. The rapporteur’s office has successfully campaigned for the abolition of criminal defamation or desacato laws in nine Latin American countries, and the rapporteur and the IACHR together have intervened in a number of cases involving individuals writers, including Mexican General José Francisco Gallardo Rodríguez, who was jailed in 1993 after publishing a Master’s thesis calling for human rights oversight of the Mexican military.

Alarmed over the Ecuador-led efforts to impose mission-crippling “reforms” on the IACHR and Special Rapporteur’s office, the Assembly of Delegates of PEN International unanimously approved a resolution in support of the bodies at the 2012 PEN Congress and called on OAS member states to reject the ALBA proposals. PEN American Center and other PEN centers throughout the Americas have since been campaigning to ensure the IACHR remains free of undue influence from member states.

While last week’s vote constitutes a significant victory for human rights protections in the America, challenges to the IACHR and Special Rapporteur’s offices are likely to continue. Faced with a threat by Ecuador and Bolivia to withdraw from the IACHR if its demands were rejected, the OAS adopted a last-minute resolution “to continue the dialogue on the core aspects for strengthening” the OAS human rights system, all but ensuring ongoing criticism of the offices and renewed efforts to weaken their mandates in the future.

Ecuador will likely continue to lead the charge. At a meeting with OAS representatives in Guayaquil, Ecuador, earlier this month, President Correa again leveled criticism at the United States and Canada, two countries that provide much of the funding for the IACHR and Special Rapporteur’s office but that have not ratified the Inter-American Convention on Human Rights and reject the jurisdiction of the Inter-American Court of Human Rights. Correa is doubtless trying to deflect attention from his own poor record on freedom of expression, but his argument that there is a “strong asymmetry” to the OAS human rights procedures clearly has traction in the region, and has only gained strength from the refusal of the United States to answer complaints pending before the IACHR relating to the treatment of detainees in U.S. custody since 9/11.

In a letter to President Obama this January, PEN American Center commended the United States’ leadership in protecting the autonomy of the IACHR and the Special Rapporteur’s office, but warned that its own failures to accede to review by those bodies was threatening to undermine efforts to ensure international accountability for human rights abuses.

At PEN American Center, we will continue to press both for full compliance with human rights norms here at home and for strong inter-governmental bodies like the IACHR and the Office of the Special Rapporteur for Freedom of Expression in the Americas to help keep governments in check around the world. Last week’s vote was a gratifying sign that those bodies are recognized as vital protectors of writers and press freedom in the region. President Correa’s continuing attack on these bodies—just yesterday he announced that Ecuador would not recognize the authority of the IACHR to grant preventive measures to stop abuses in progress—is a reminder of how essential they really are.