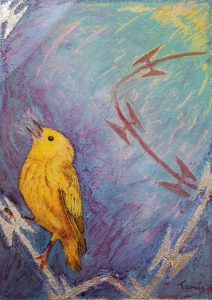 I sat cross-legged on a thin mattress covered by a grey blanket. I felt a gloom eclipse the 4 by 10 foot cage that contained me. I strained my eyes to look into a small hand-held plastic mirror. It reflected a shadowed person. I peeked over aged knuckles to see the 13 steel bars that separated me from the rest of the world.

Beyond the bars, outside the cell, and in the distance, I saw dirty windows refracting glints of morning sun.

I sat quietly and re-focused on the mirror that had no eyes. I looked past the person and saw tiny hairs poking out of black skin. I rubbed them. Then, the shifty eyes came to light. They blinked twice-closed momentarily and then stayed open to unmask a face that disguised countless wounds and aches and flaws with cuts and slices and abuses—most still throbbed.

I stretched out on my back. It felt like I was sinking into the ground. The grass hugged me and itched me. The earth’s freshness and grass found its way up my nose. I closed my eyes and saw red and white sparkles. I shut them super-tight and the lights got brighter.

Every Saturday, my mother took me, Carl and Rob to the neighborhood park. Picnic tables were set up everywhere. Brick barbecue pits cooked all kinds of food. A small pond surrounded with trees and flowers and all kinds of bright colored plants had ducks swimming in circles and dipping underwater looking for stuff to eat. The pond was full of all kinds of creatures too, like tadpoles and floating bugs. Once, I saw catfish breathing out of water.

Carl’s my big brother. He was running around, playing with his bow and arrow.

My world had always been watching Carl and all of the stuff he got.

I knew, the first chance I got, I was gonna grab that bow and arrow.

Rob’s just older than me. He got a lot of stuff, too, but I liked Carl’s stuff better. Plus, Rob’s not as cool as Carl and doesn’t like the same kind of toys that we like.

I was scheming on how to get Carl’s bow and arrow.

I sat up and saw an ant crawl up a clover. It darted up and down the light green skinny stem. I counted three leaves. A teacher once read the classroom a story about four-leaf clovers. They had something to do with Irish and luck, so I began looking for a four-leaf clover. But, all I could find were ones with three leaves. The ant was still wandering around. It was looking for his friends, now going up and down a blade of grass. Maybe the ant was lost. Up above, a blackbird landed in the tree that kept the hot sun off me. The bird hopped from branch to branch, looking for her nest. I noticed bright red spots on her wings as it cackled and chirped. It seemed lost, too.

Being in the park was one of my favorite things to do when I wasn’t on the swings or monkey bars at Dewey Elementary. I was just getting used to walking to school by myself. The loneliness and fear were going away, because I could still see our front door when I turned to go inside my classroom. Being alone in school was the first time I was away from Carl and Rob and my mother. My father was away on his Navy ship. I missed them all while sitting on the kindergarten floor with the other kids, getting messy from finger painting, drawing with crayons or gluing things together. Sometimes, I’d look out the giant window to see a plane or a spider or a kite or clouds or I’d just stare into the sky thinking about why my brothers would hold me down and messing with me and hurt me. Sometimes, they’d beat me. Sometimes they did other things—it never lasted too long. They never said anything about it—never. We were boys. I would never tell—never.

The park was calm, but I was bubbling inside.

I wanted to get my hands on Carl’s bow and arrow.

The morning breeze took away the heat and the air tickled my skin nicely. It felt good. I rose from under the tree and looked for Carl. He was standing behind our car. I watched him lick the suction cup tip of an arrow, then carefully place it on the bow’s string. He took aim and shot it.

It landed on the car’s trunk.

My mother, who sat in the front seat with the door open, looked back at him and smiled. The arrow made a plopping sound as he pulled it free.

“Carl, can I play with your bow and arrow?”

He gave me a look that let me know to leave him alone. Then he shot another arrow. It too, stuck on the trunk. He pulled it out.

I was planning to steal it and hide it, until he forgot about it, like the time when I stole his lucky ring or stole his army men and put them in my war collection or when I hid one of his cat’s eye marbles.

“Wow, that was cool,” Carl said adjusting his Indian headband.

He shot an arrow straight up. Our heads tilted upward, following it high, high, high—then back down, like we did a long, slow, yes nod.

My eyes went wide. I wanted to shoot some arrows.

“Please, Carl. I wanna play,” I whined, rocking from foot to foot. I gave him my saddest look.

“You ain’t gonna break my toy,” he said as he packed it away with me standing there pouting

I said under my breath, “Steal it.”

Carl scanned the park as if searching for something.

His adventure and my frustration were interrupted.

“Come and get your hotdogs,” our mother called.

We broke and ran to the picnic tables like the hungry kids we were. We stuffed ourselves with juicy hotdogs. Mustard dripped on my Under Dog t-shirt and catsup smeared on the side of my mouth—some landed on the ground, which brought the ants. Carl finished two hotdogs before I could finish one. He got up and ran circles around the park. He ducked under tables and jumped over benches.

I watched him in awe.

I couldn’t stop thinking about what it meant to be Carl.

I forgot about the bow and arrow.

My mother went back to the car. She kept the door open. I caught her looking at us. I felt protected and safe.

My attention snapped back to Carl.

I watched him pass under the picnic tables as if he were a ghost. I wanted to do it too. He could teach me, like he taught me how to climb trees and hide in the woods. He showed me how to put loops in my shoestrings to tie my shoes. We caught lizards and trapped pigeons. I remember when I refused to float in our backyard pool and he was there to hold me up.

He did it again.

This time, it looked like his head opened up as he passed under the table.

He stopped and faced me. I thought he was going to come after me to get me. I felt afraid. But, I wanted him to teach me how to pass under tables.

Stepping with purpose, I walked up to him, but kept my eyes down until I got to him.

“What are you talkin’ bout?”

“You went right through that table,” I said pointing.

Carl tilted his head, then shook it. He looked like he was trying to figure something out.

I wanted to do what my big brother did. If he could pass through tables, so could I.

With my back propped on a tree, I looked at one of the thick picnic table.

I was a giant

I could push anyone around.

I took off at full speed, ducking right before I got to the picnic table.

I woke up to a crying mother, which made me cry. Carl stood by her side, handing her napkins. She was patting blood off my face, but the warm goo still got in my eyes. I was blinking and sniffing. Then, Carl picked me up and carried me to the car. My mother drove to the Navy hospital. I got seven stitches on my forehead.

I was still sitting on my bunk.

I flicked on the light.

I reached into my locker for a jar of instant coffee and spooned some into a cup of steaming water. I blew the brownish liquid cool.

I picked up the mirror and saw a shift as I thought about my wounded life—the wounds that came from wanting to be someone who I am not—the hurt that loved ones carelessly inflicted on me—the painful things that I perceived and made real.

I pulled the mirror closer with my face only inches away.

The thin straight scar made me think about Carl.

Last week, the protests gathered thousands of people in France. The demonstrations related to a new bill accused of obstructing civil liberties, and enacting unprecedented constraints on freedom of expression. https://wapo.st/2VpRWvr

Carol Solberg, a volleyball star, was losing her patience with Jair Bolsonaro's Brazil: the burning rainforest, the attacks on culture, the catastrophic coronavirus response, becoming a powerful symbol of opposition and an unlikely champion of free speech. https://bit.ly/37pT9sk

It's been three years since Zimbabwe's President Emmerson Mnangagwa took power and promised free expression. But critics say press freedom is not being respected, pointing to this year's 2 arrests of journalist Hopewell Chin'ono, both triggered by tweets. https://bit.ly/36kN3dq