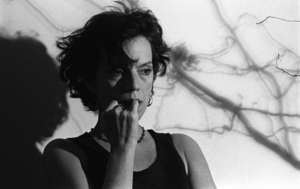 Jacob Moe is the recipient of a 2015 PEN/Heim Translation Fund Grant for his translation of Part Time Dragons by Maria Mitsora. Read an excerpt of the translation here.

Maria Mitsora appeared on the Greek literary scene in the late 1970s, first publishing in underground magazines alongside a generation of postmodern fiction writers and poets. Over the past four decades she has championed the short story—a dominant form in Greek narrative traditions that stretches back to the 19th century—as a site of formal and thematic experimentation. Poetic, philosophical and politically engaged, the 16 stories in Part Time Dragons constitute a vital retrospective of her work.

Mitsora is largely a writer of the urban landscape, depicting Athens as a changing character: a city of boarded-up windows and junkie-riddled squares, a labyrinth of basements and balconies, a modern-day underworld straight out of ancient Greek mythology. But the city’s dimensions are most clearly sketched out by her disjointed protagonists. Through their eyes, the space of the city becomes the space of the mind—as the distinction between the two collapses amongst fevered hallucinations and the near-certain triumph of chance over free will.

The stories in this forthcoming collection employ a variety of styles and genres, synthesizing stream of consciousness, surrealism, and the disruptive textuality of post-structuralism. Mitsora’s apartment, nestled on a tree-lined street in Athens, betrays selected influences. Poe, Faulkner, Woolf, and Euripides sit on a shelf next to Robert Johnson and Muddy Waters LPs; a column of yellowing astinomika, Greek murder mysteries, is precariously stacked at arm’s reach from the desk; a copy of the Old Testament lies on a coffee table along with a silver cigarette box and miniature ivory engravings. These various objects materialize in her stories, whether as stylistic choices, mythological parables or the revelatory language of divinations and miracles.

“Althaia’s Prophecy,” her fittingly titled short story, begins: “In the time of the Great Disaster, construction of a milky dome within the old volcanic crater had been hurriedly completed.” In “The End of Matter,” characters are weighed against their netherworld counterparts. “Alkis isn’t anything anymore, I repeated to myself… neither menace nor promise, nor the Eurydice I can bring back from Hades.” Later in the same story, characters are virtual embodiments of these supernatural features. “He turned and looked at me, hour and sky belonging to him even if his heels lacked wings.”

Bringing this collection into English requires a dismantling and reassembling of Mitsora’s various registers and references, enabling a set of intertextual relations within English language literary traditions, both guiding the translation process and creating a helpful framework for the eventual reader. The result resonates with existing styles and genres, communicating her forms and themes to a new audience. The translation also enters in conversation with contemporary short story writers in English, whether with the lyricism of Mary Gaitskill’s marginal, transgressive characters, or the formal experimentation of Lydia Davis’s work.

Despite the author’s breadth of work and recognition, only one of her stories has been translated into English so far. Bringing Mitsora into a major language like English is not only about introducing a preeminent voice of the Greek short story into a greater context; it is equally about making new things possible in English. There is nothing quite like her writing in the US literary scene today.

Jacob Moe is a translator of Modern Greek and Brazilian literature and theater, recipient of a PEN/Heim Translation Fund Grant from PEN American Center, as well as grants from several Greek cultural foundations and a translation fellowship with the Athens Academy. He is currently based in São Paulo, Brazil, where he has been awarded a Fulbright grant in film studies. He is also co-founder and managing director of the Syros International Film Festival.

Russian opposition leader Alexei Navalny demanded on Monday, that Russia return the clothes he was wearing on the day he fell into a coma in Siberia, calling it “a crucial piece of evidence”. https://bit.ly/3kCEIWW

Reporter and photojournalist Ann Curry (@AnnCurry) is one of 100+ writers, artists, academics, and public servants who envisioned how we can all emerge better from our current crises in their short essays submitted for PEN America's #WeWillEmerge project: https://bit.ly/2QCebMy.