The Named and the Nameless 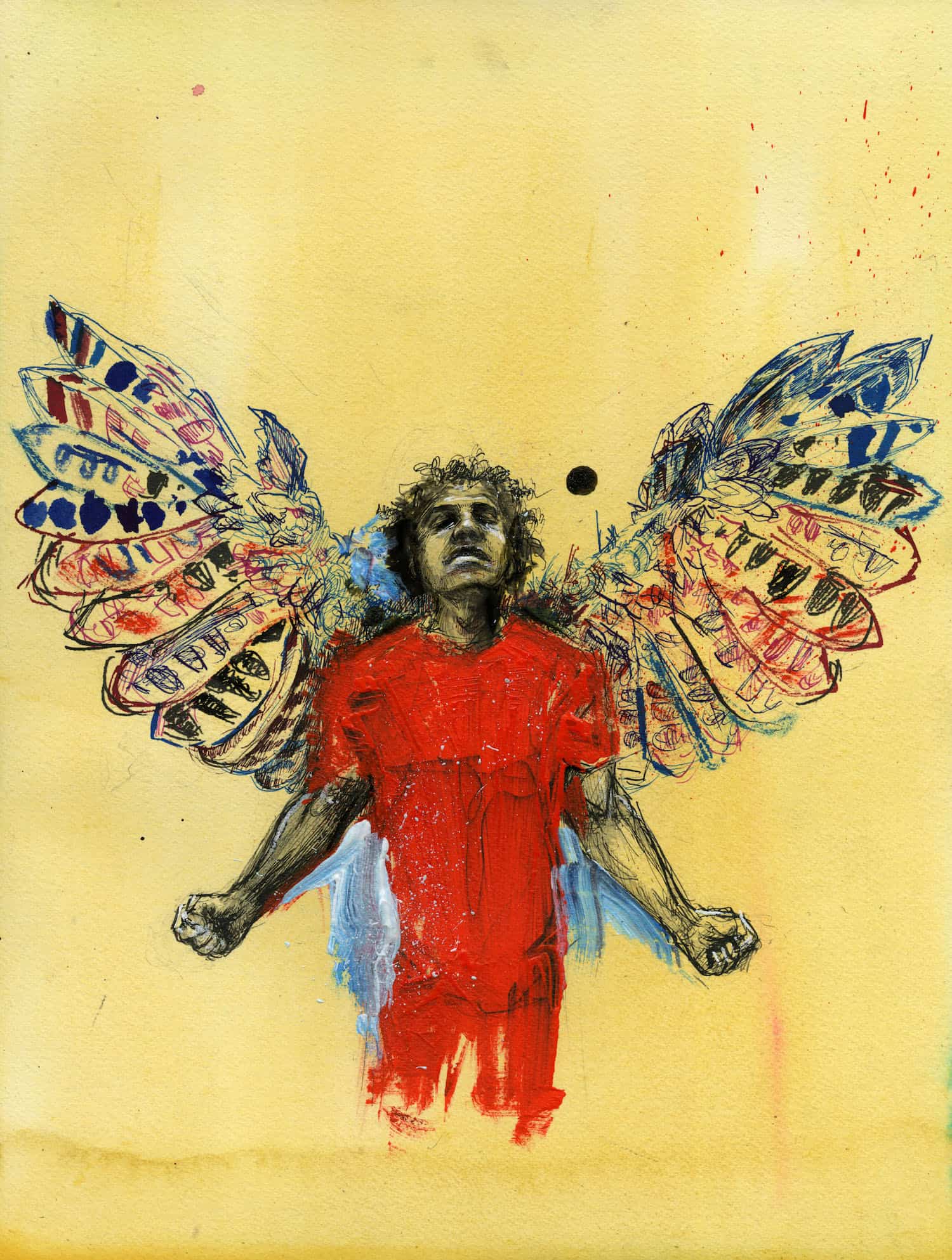 In this week’s special edition of the Illustrated PEN, Guest Editors Robert Kirby, Meg Lemke, and Whit Taylor, along with PEN America’s Prison Writing Program, present “The Named and the Nameless,” a series of illustrations that accompany winning manuscripts from the 2018 Prison Writing Contest.

The four decade old PEN America Prison Writing Program works from a connective orientation, rather than a charitable approach. Despite the legacy title of our program, from our perspective, our contest winners are not “prison writers,” but writers who happen to be incarcerated. In turn, we introduce new audiences to the work of strong writers, and seek to reintegrate exiled voices into our literary spaces. When the editors of Illustrated PEN invited us to consider a series of images that would visually render the award-winning work from our 2018 contest, we jumped at the chance to connect.

A powerful side effect: Connective efforts such as this amplify the inherent possibility for advocacy. Pieces written first hand do tremendous work in helping to inform the public of the reality of what it means to be imprisoned, and honor the capacity of prisoners’ original writing to upset common perceptions about who is behind bars. Collaborating artists declare to the public that there is reciprocal inspiration at play. Connectivity moves in both directions, the writer and artist cultivate a creative ecosystem that permeates barriers, and highlights the talent of each individual’s contribution.

“People have written—shocked but intrigued—and asked how and where I get my inspiration from ‘in such an uninspiring environment,’ as if there’s a magic well in the prison yard viewable on Google Earth or something. Although the implication’s offensive, I know they mean well; therefore, I remind them that I’ve been exiled from the world, not from my heart. I explain that “prison” extends beyond these fifty-foot walls, that it is a state of mind infecting people of every background, that prisoners extract their inspiration from the same places other artists do—from nature, relationships, and past experiences—and that we are not so different. There’s a prisoner and warden in everyone. Inspiration draws from the relationship between the two, portrays the internal struggle of human emotions. I think the act of writing bridges gaps, perceived gaps, between people because it’s a shared passion outside the jurisdiction of ego—an open hand across the demarcation lines of apathy.”

A special thank you to the contributing artists: Molly Crabapple, Max Clotfelter, Yolande Brener, and Rachel Masilamani. Myself and my colleague, Robert Pollock, Prison Writing Program coordinator—bringing our full selves to our work— have also offered illustrations for the project. These visuals will also be featured in our first ever print anthology, The Named and The Nameless, forthcoming in September 2018.

“Somehow the soil knows the nature of what is hid within so that it makes seeds into trees and eggs into birds but not all eggs. The soil watches him like the birds do. It knows him like they do. The trees are friendly even when they scratch his hands, and they love him and he them because they are his friends and they would tell him if there was something wrong. The shadows flitting in the corners of his eyes want to tell him something different. He doesn’t listen to them. The smell of good decay is not so different from the smell of bad, and sometimes poison germs inside of sweet raw eggs make him sick, so he doesn’t eat them raw no more except when he is hungry.

He has lived this way forever, and it will never change.”

“Whenever I’d hear her crying, I’d climb on top of my stainless steel sink and talk to her for hours through the vent. “Sophia,” I’d whisper. “Why are you crying?” She would always answer. Perched atop our sinks, we’d share deep feelings of remorse for the poor choices we both had made. We’d talk about life, and about how it didn’t feel like there was light at the end of our tunnels. We even questioned if we deserved to see the light. I look back now with a clear understanding that guilt was consuming us both. We learned fairly quickly that we could lean on each other for support, especially when our family members wouldn’t understand, or couldn’t understand, the things that we were going through. I couldn’t fix her, and she couldn’t fix me, but the commonality of our situations provided us each with a small measure of comfort in our new world of clanging cell doors and constant noise.” 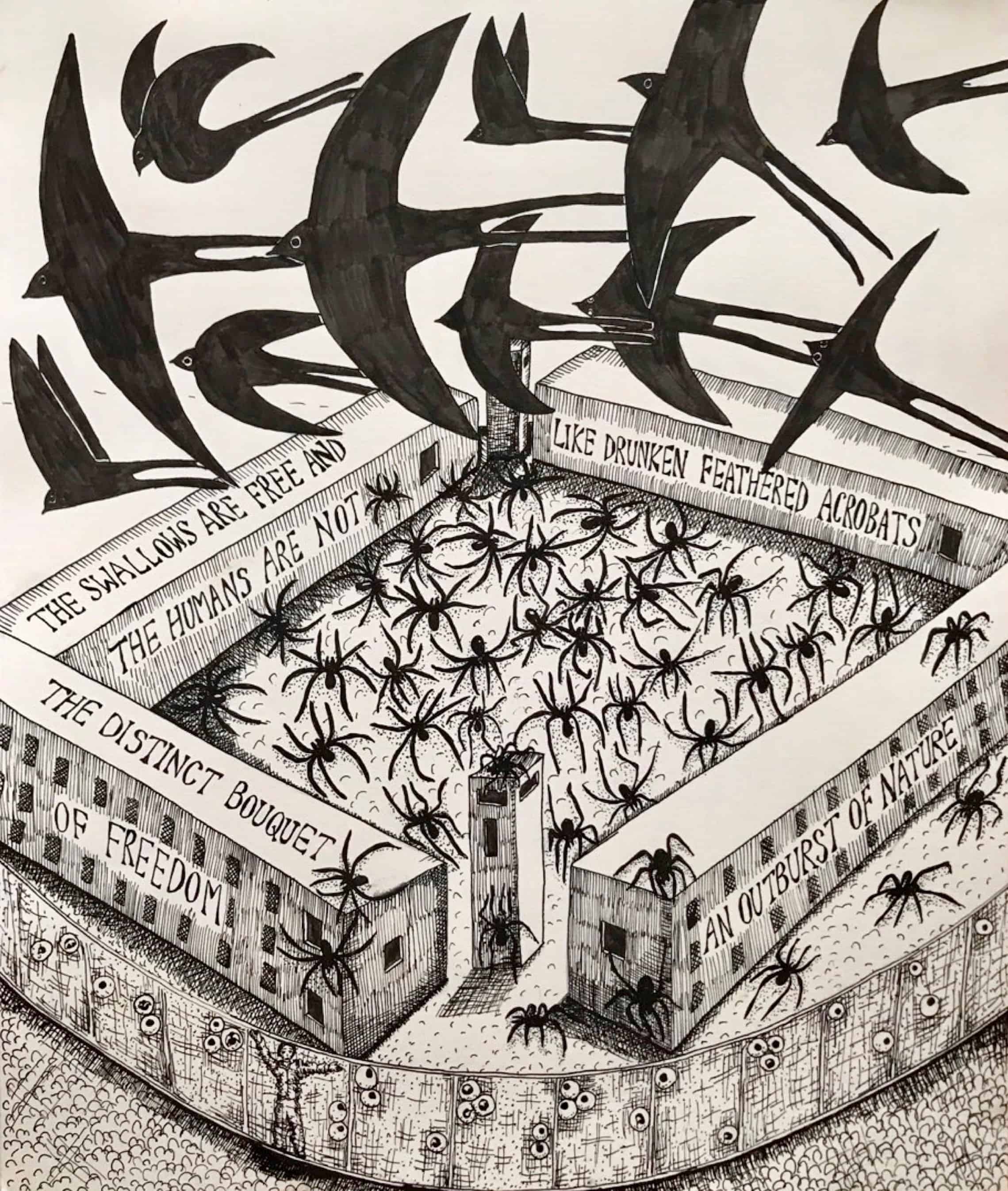 “Each early dawn and during the fading light of dusk I love to watch the hardy little birds hurtling in tandem by the hundreds, coasting and whipping around the sky, exercising or herding bugs maybe, or perhaps just flying for the joy of it. I enjoy it, watching their huge swarm, a thousand strong, wheeling around like drunken feathered acrobats, breathtaking and beautiful as they pursue and eradicate every bee, fly, mosquito, moth, and whatever else is in the air and smaller than the hungry little assassins. Watching the sparrows is better than TV or pinochle and has the distinct bouquet of freedom.” 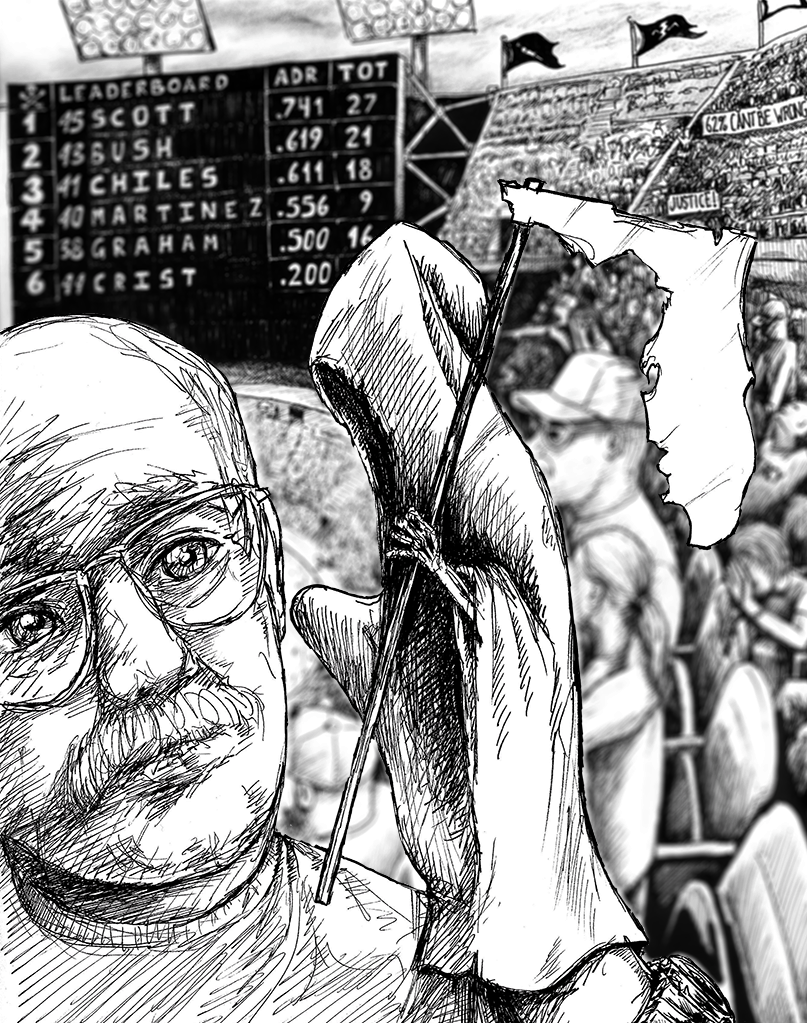 “Think about that. It’s easy to dismiss what I say by blindly insisting that a jury convicted Oscar Bolin of murder and that justice demands that society take his life. But really—who is actually investing more conscious thought into the act of taking a human life?“

“The Storm”
by Edward Ji, Honorable Mention in Poetry
Illustrated by Rachel Masilamani 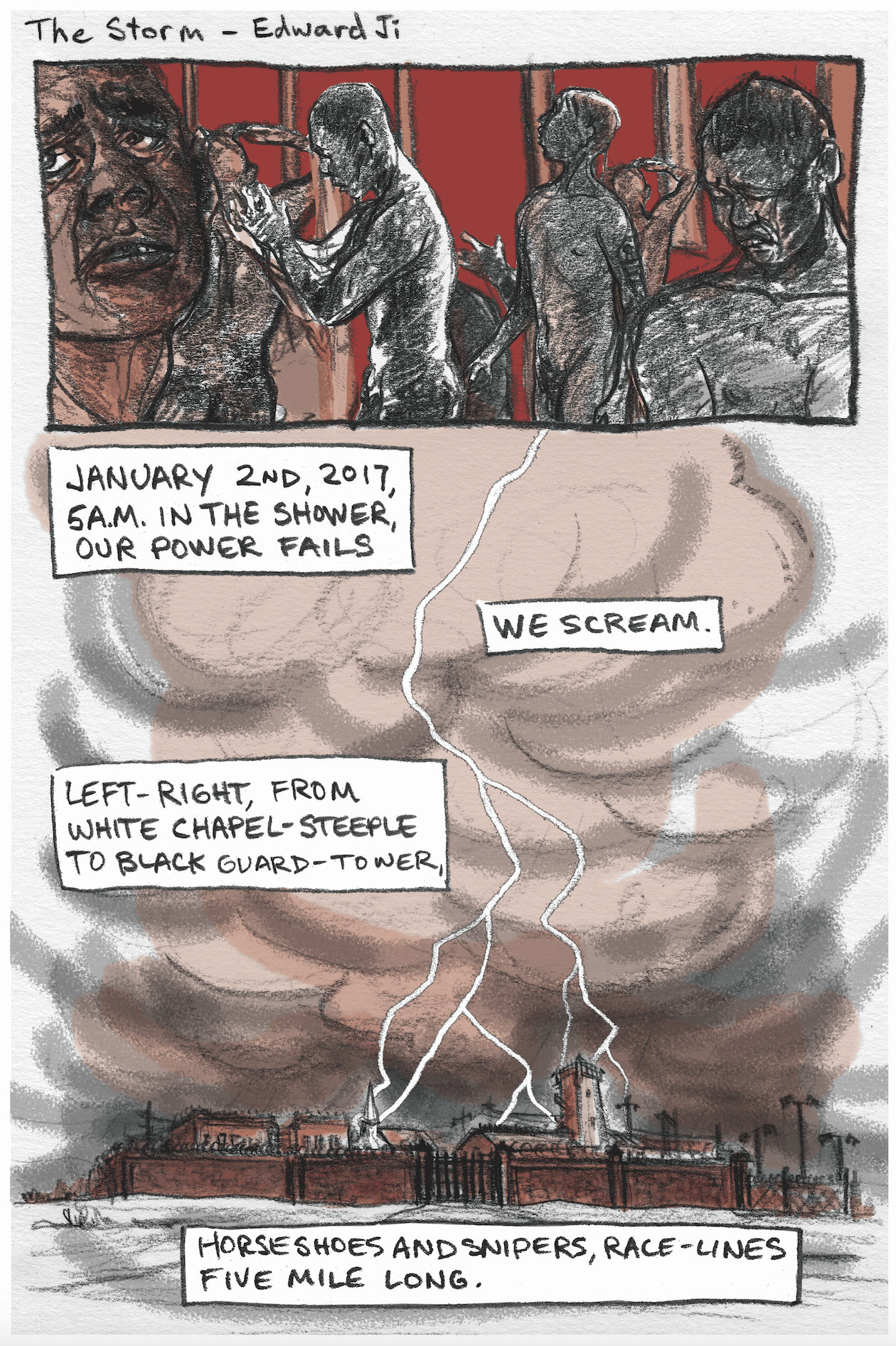 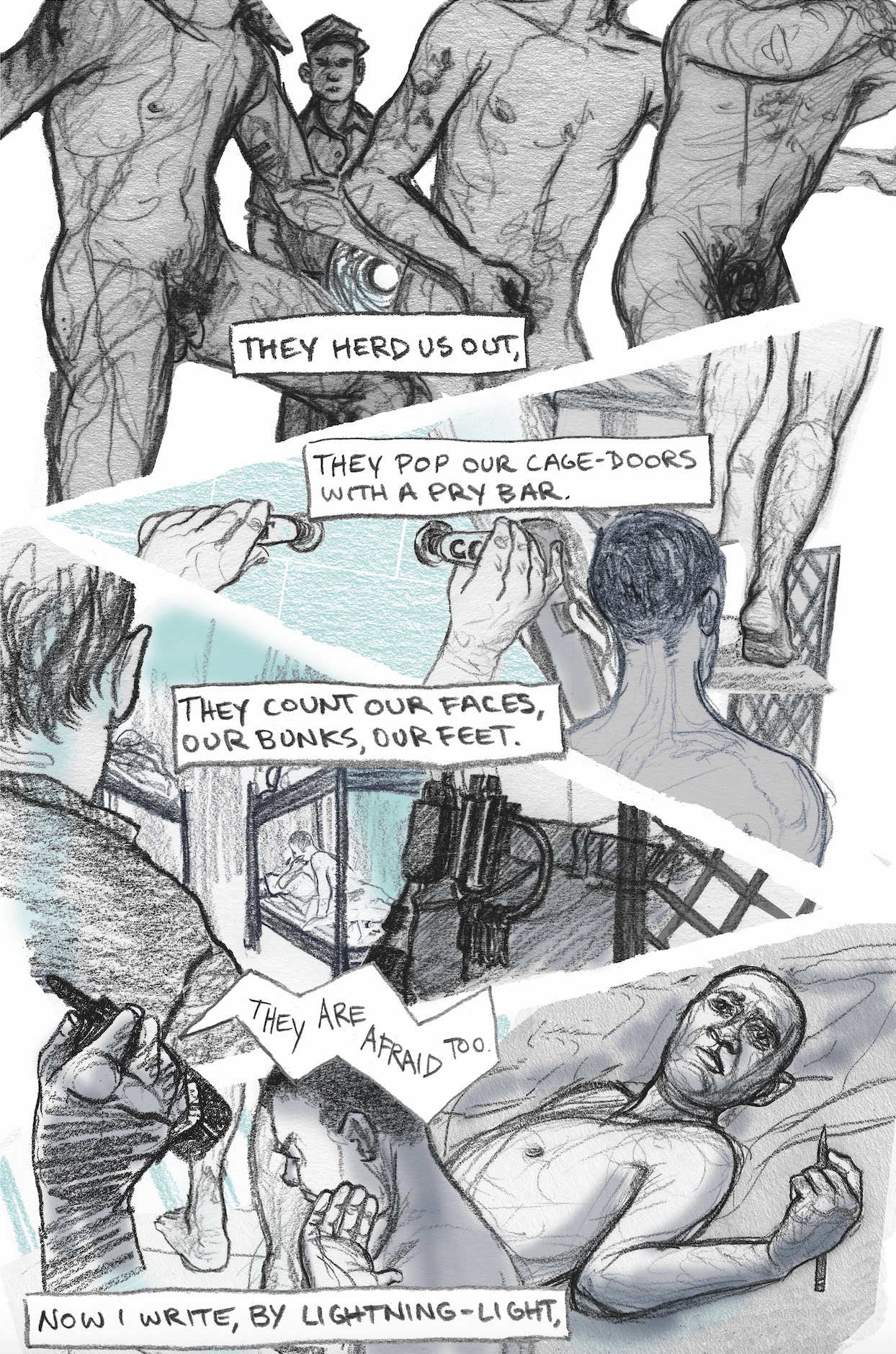 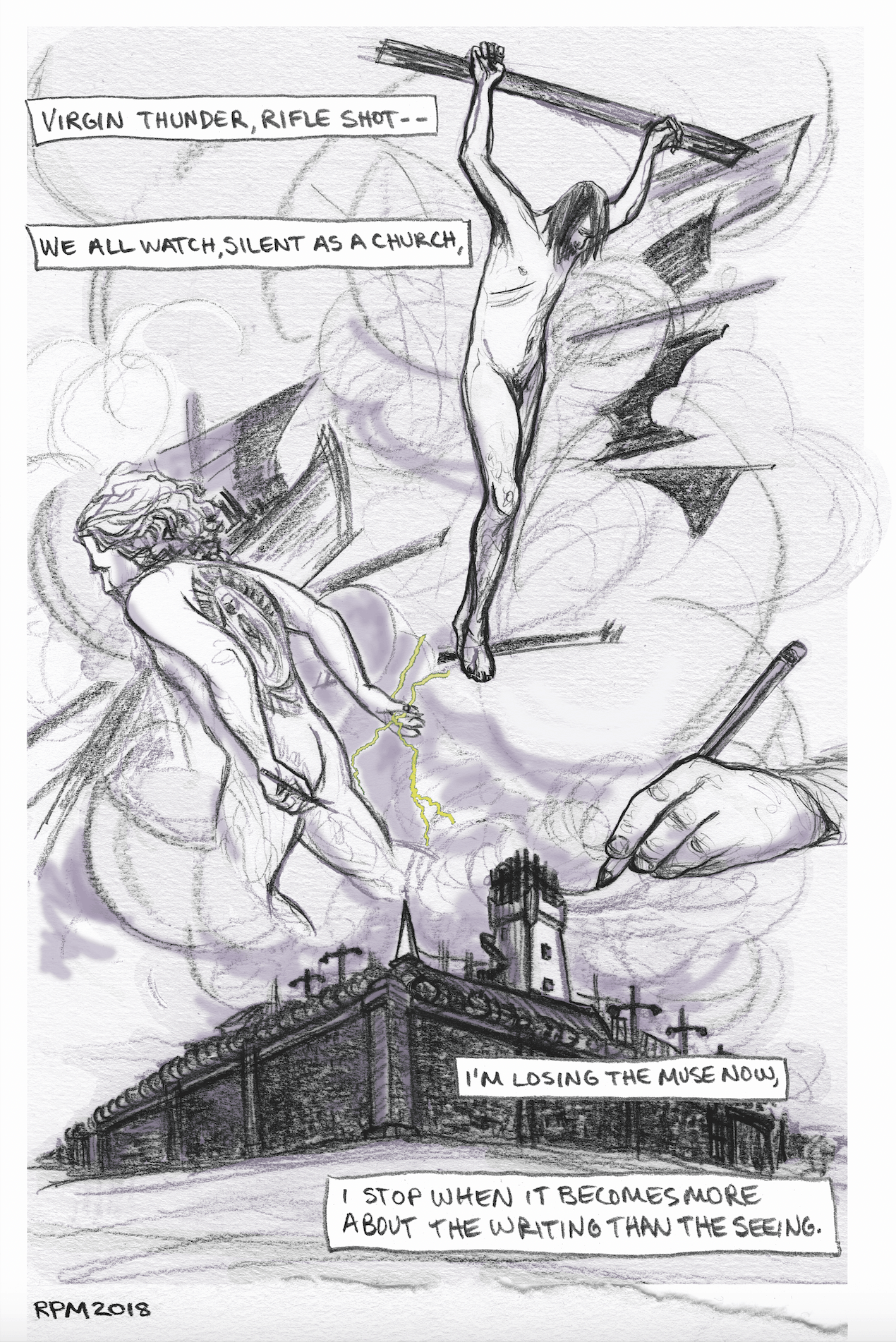 Yolande Brener has worked as an actress, filmmaker, singer in an all-girl band and disciple of an alleged Messiah. Her memoir, Holy Candy, won first place in the Writer’s Digest self-published life stories competition in 2014. She won the New York City Parks Department’s Poems in the Park competition in 2010. Her work has been published in New York Press, Fiction Magazine, Black Scat Review, Nerve.com, Anthem Journal, Strange Angels, Harlem World, and others. She is currently working on a graphic novel.

Max Clotfelter is a comic artist and illustrator with an MFA in Sequential Art from the Savannah College of Art & Design. He has been self publishing his mini-comics and zines for the past 20 years. His work has appeared in The Seattle Weekly, Vice, Black Eye, Vision Quest, and PORK.

Molly Crabapple is an artist and writer in New York. She is the author of two books, Drawing Blood and Brothers of the Gun, (with Marwan Hisham). Her reportage has been published in the New York Times, New York Review of Books, The Paris Review, Vanity Fair, The Guardian, Rolling Stone, and elsewhere. She has been the recipient of a Yale Poynter Fellowship, a Front Page Award, and shortlisted for a Frontline Print Journalism Award. Her art is in the permanent collections of the Museum of Modern Art, the United States Library of Congress and the New York Historical Society.

Rachel Masilamani is a Pittsburgh-based cartoonist who has been amassing a unique and significant body of work since the dawn of the century.  She started off strong, being awarded a Xeric Grant for the first issue her series, RPM Comics, and has continued to craft her finely nuanced, personal comics in small run self-published comics and anthologies like the Indiana Review, Graphic Classics and Aster(ix).  She is currently working on a new graphic novel, Nonpartum, which is being published in installments on Mutha Magazine.

Caits Meissner is a New York City-based poet, artist and cultural worker, and the author of the illustrated hybrid poetry book Let It Die Hungry (The Operating System, 2016). She currently serves as the Prison and Justice Writing Program Manager at PEN America, and teaches at John Jay College of Criminal Justice.

Robert Pollock is PEN America’s Prison Writing coordinator. He is an ongoing participant in Rehabilitation Through the Arts, Musicambia, Refoundry, and Carnegie Hall’s Musical Connections Advisory Committee. As a visual artist, he illustrated the picture book for children of incarcerated parents, Sing Sing Midnight, which is used in therapeutic settings around the country.