The president’s war with the press has grown more sinister in the last month—from a vulgar and undeniably sexist Tweet directed at Mika Brzezinski, to the bizarre clip of him pummeling an embodied CNN, to the “joke” which kicked off his private G20 meeting on Friday with Vladimir Putin.

Antagonism toward reporters can hardly be considered a casual subject with the Russian president. Since 1993, the Committee to Protect Journalists has documented more than 58 journalists’ murders in Russia (motive confirmed), with two in 2017 alone.

But calling out the poor taste of these comments won’t sufficiently address the danger they pose. We must also think critically and honestly about the bigger picture of normalized media contempt the president is leveraging. In a recent study conducted by the American Press Institute, only 24 percent of respondents described the news media as “moral,” and only 17 percent described the news media as “very accurate.”

President Trump’s strategy of corralling critical media under the umbrella of “fake news” preys upon this widespread distrust in “the establishment.” But the data also shows that Americans are consuming more news than ever—and that media trust goes up when individuals are instead asked about the specific news sources they already turn to.

We may never popularize sympathy for the media, as David A. Graham rightly observed in The Atlantic earlier this month. But we can certainly do a better job of demonstrating how persistent journalism directly affects community change. To that end, here are a few of the ways reporters have used human stories to bring about substantive action.

WATER IS A HUMAN RIGHT

Few stories convey the necessary power of journalism like the Flint Water Crisis. In it, we can trace the ways citizen concern and journalistic curiosity fueled public insistence for information, accountability, and redress. We do well to also remember that this is a piece of news which largely began with one reporter, Curt Guyette, walking door-to-door to test residents’ water for lead.

In a year of New York Times headlines alone, we can follow the journey toward legitimacy, answers, and ultimately the systemic social issues from which the crisis emerged.

“A Water Dilemma in Michigan: Cloudy or Costly?”

“Michigan: Steps Taken to Test for Lead in Flint’s Water After Change in Source”

“Flint Officials Are No Longer Saying the Water Is Fine”

“Flint Wants Safer Water, and Someone to Answer for Its Crisis”

“A Question of Environmental Racism in Flint”

The full story, of course, includes reporting by other national outlets, as well as critical coverage by local sources like Michigan Radio and the Detroit Free Press, all of which helped to surface the toll of the crisis through individual accounts and images of family doctors, poisoned residents, fearful teachers, pastors who put a halt to baptisms—narratives that ignited national outrage and finally led to testing and ongoing emergency management.

WHOSE STREETS, OUR STREETS

Social media voices in the last few years have brought about a national reckoning with police brutality, with news publications serving as an important record on the extent of police violence. The Guardian, for example, has solicited input from its readership to form “The Counted,” a resource which follows reported deaths at the hands of the police and breaks apart these cases by geography, race/ethnicity, armed vs. unarmed individuals, and other details.

Media inquiries into these instances are also increasingly serving as public arenas for insisting on accountability, transparent investigation, and action from local police departments. Oftentimes, this reporting may not be reaching national attention—but it is still placing necessary pressure on the police’s use of excessive force. In the recent case of Zachary Bearheels, a citizen of the Rosebud Sioux tribe who died after being dragged, beaten, and tased 12 times by the police, continued coverage by Alia Conley and Andrew J. Nelson of the Omaha World-Herald has brought forward information about Bearheels’s ongoing mental health issues, eye witness testimonials, questions and outrage from his family, and the firing of two officers involved in his death. 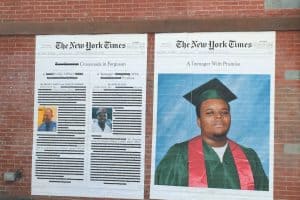 The evolution of reporting on police brutality has, itself, become a necessary space for interrogating the ways in which public narratives are invested with assumptions of innocence and criminality. Which details are brought forward and which are omitted? How do the photographs selected cast individuals? And how can publications responsibly reflect on the biases revealed in their reporters’ language—as when The New York Times published the assertion that Michael Brown was “no angel”?

Reporting on these sorts of issues can reveal the impossibility of total impartiality. In these cases, journalism provides a necessary opportunity to reflect on how other factors and attitudes surround fact-based reporting—and how, as individuals in a community, we come to terms with these events.

FACES OF THE TRAVEL BAN

Journalists have consistently responded to new iterations of the president’s executive order on immigration with stories of affected individuals, families, and communities. Reporting on an Iranian infant barred from critical surgery in the U.S., for example, became an early flash point in the narrative of the executive order, leading to relatively swift action from human rights organizations and policymakers toward an intervention for her entry into the country.

News outlets like CNN, the Washington Post, and The Guardian have persisted with reporting that has now become a kind of genre—thumbnail portraits of refugees and immigrants who are also grandparents, students, artists, scientists, veterans, and more—to demonstrate the breadth of impact the orders have had on families, jobs, and individuals’ health.

These stories elicit empathy. But they have also drawn attention to the many contributions of immigrants in equally different communities around the country—from rallies by immigrant workers in Reading, Pennsylvania, to the strikes carried out by the New York Taxi Workers Alliance and by Yemeni bodega owners in Brooklyn. In the wake of the executive orders, local businesses and community spaces have maintained visible solidarity with immigrants by posting public imagery—like the now iconic “Refugees Are Welcome Here” poster—along with other visible expressions of support.

THE HEALTH OF US

An outpouring of personal stories in both the news and social media have similarly characterized the public response to proposed changes in healthcare—in many cases, helping individuals better understand the specific ways in which their own access to care would change.

Local news reporting has played an especially important role in streamlining the delivery of information about changes to healthcare. On July 2, POLITICO reporter Dan Diamond shared a Twitter thread with images of front-page stories from news sources like the New Orleans Advocate, Houston Chronicle, Alaska Dispatch News, and Lexington Herald-Leader, all outlining the kinds of conditions which would render individuals vulnerable for loss of coverage and the unique ways proposed healthcare changes would be likely to impact those specific communities.

The questions and anger surfacing in town halls around the country during the July 4 recess suggest that this reporting is effectively conveying to individuals the risks they face. The volume of pressure has given pause to at least 10 Republican Senators who have publicly expressed their rejection of the bill’s current formation. 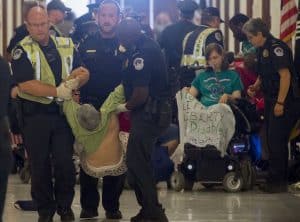 The debate on healthcare has also served as an important reminder that health and ability are aspects of diversity which merit our attention. An inspiring and unforgettable act of resistance was recently staged by disability advocates at Senate Majority Leader Mitch McConnell’s office, many of whom removed themselves from their wheelchairs and staged a die-in before his door. Forty-three were arrested altogether.

The images of disabled individuals being carried away by police, coupled with reporters’ accounts of the protestors’ stories and concerns, do important work to render this advocacy community more urgently and visibly.

“Without those services—without the home and community-based services—I am just what people think about me, as a person with a disability,” Dawn Russell shared in Time. “But with these services, I live a life. I live independently, interdependently, in the community just like everybody else.”

Lessons Out of Crisis