“The Intersection” is a new bi-weekly feature exploring issues at the core of PEN America’s work—where literature intersects with human rights advocacy. Authored by Literary Outreach & Activism Senior Manager Kyle Dacuyan, “The Intersection” digs into the pressing issues of the day to consider how writers can engage free expression to help advance social justice causes.

I have thought frequently this past year of the opening line to Solmaz Sharif’s Look: “It matters what you call a thing.”

The president of our country is not the president of our language. And yet I cannot deny that Donald Trump is changing the terms of American discourse. Part of this owes to his affinity for Twitter—we have more unedited, unvetted speech to consider—but part of it owes also to the idiosyncrasies of his widely broadcast speech, which has ranged in description from populist to deceitful.

In nearly every instance, questions arise about what the president intends, what his words objectively mean, and how these semantics will be enacted on our lives. The trouble is that words are incapable of statically objective meaning. Their definitions exist only insofar as we agree upon them. And it is because of disagreements that the meanings of words are vulnerable to change.

Even objects are subject to these developments. At one time, a “clue” was a “clew”: a ball of yarn, a word with definite physical form. So how did we get here? Lexicographers point to Theseus in the labyrinth, unraveling a clew to remember the places he had already been. Through repeated, related usages, the word has since drifted into the plots of other mysteries until we arrived at something which requires context and other words for definition.

Merriam-Webster now defines a clue as a piece of evidence. But what is evidence? “Something that furnishes proof.” And proof? Proof is “the cogency of evidence that compels acceptance by the mind of a truth or a fact.”

Some would argue we have gotten to the point where it is not so ridiculous to ask, truthfully, what a fact is. In December, political commentator Scottie Nell Hughes suggested on The Diane Rehm Show that “there’s no such thing, unfortunately, anymore of facts.” A siren went off in my brain when I heard that. It was the “anymore” that killed me, as though the notion that facts were essential to meaning had faded into history.

There is perverse credence (I won’t say truth) to this claim. In making the case for Trump’s assertion that millions had voted illegally, Hughes contended, “Mr. Trump’s tweets amongst a certain crowd—a large part of the population—are truth.”

I believe truth and fact are not subject to majorities or elections. But I also acknowledge that other individuals conceptualize truth and fact from different sets of evidence; that for some, Trump’s say-so does constitute evidence enough.  And the differences in what we believe to be true are stoking very real fear with very real consequences, from how we vote to how we engage with one another in line at the grocery store.

Trump weaponizes language against truth in at least two ways. He is good at dividing—at using conventions of plain speech to draw lines of “us” and “them”—and he is a persistent tautologist, someone who uses himself as the basis of definition. 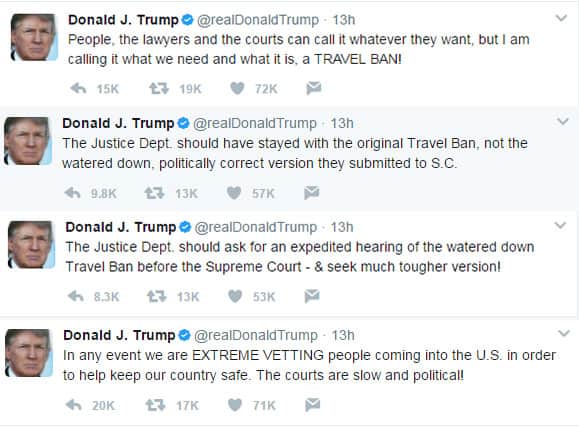 Donald Trump’s tweets on the executive order heading soon to the Supreme Court.

The invocation of “political correctness” is one way Trump consistently distinguishes himself from his critics and opponents. Another is his penchant for seemingly direct, casual address—“People, the lawyers and the courts can call it whatever they want”—and suggesting there is a collective, political “they” to be distrusted.

It is curious that Trump calls his executive order a “travel ban” and then, in the same breath, mentions “extreme vetting,” the tactical description his administration has so relentlessly insisted upon. “It’s not a Muslim ban. It’s not a travel ban,” Sean Spicer argued in January when the order was first introduced. “It’s a vetting system to keep America safe.” Vetting may be—as Trump has tweeted—the method by which the order would be executed. But that is not the same as defining the order—as “calling it what we need, and what it is.” It matters what you call a thing—in this case, a ban—because it is essential to revealing the order’s intention. Whether there is unconstitutional animus within that intention is, as Noah Feldman writes in Bloomberg, what will ultimately affect the order’s fate.

Our judicial system provides a critical, interpretative checkpoint. But we must still confront the broader crisis of language—of what to do with a president who defines truth on his own terms, who normalizes parlance like “fake news” to shield himself from criticism. What can writers do in this moment? We can unnormalize. We can render words with strange, precise attention, as Sharif has done in Look, a book which perforates poems of lived experience with words found in the Department of Defense Dictionary of Military and Associated Terms.

We can satirize. We can maintain vigilance in how we engage and unpack discourse. We can parse. But none of this amounts to anything if we do not also address who we are writing toward and including. Whose lives are represented, and whose are ignored? Who gets centered in the production of what we call culture, or literature, or news? Who do we call they, and we, and you?

The president’s great ability has been to empower a certain segment of the population who feel invisible with a sense of belonging and untapped greatness. He has challenged us to encompass and recognize in our writing those groups with whom we fractiously disagree, to imagine a narrative of our living together that is different from the one he proposes. “Trump is writing,” a poet said to me recently. We need to invent new ways of writing back, together.

In @article19org and @pressfreedom's latest briefing, interviews and recommendations examine the different manifestations and severe impact of online harassment and abuse faced by women journalists from the Iranian diaspora. https://bit.ly/3aTnrpN