The PEN Ten with Shani Mootoo 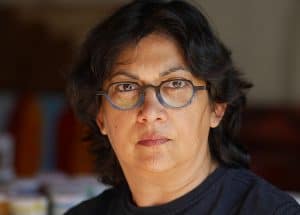 The PEN Ten is PEN America’s weekly interview series. This week, we speak with Shani Mootoo, whose latest novel, Moving Forward Sideways Like a Crab, was longlisted for the Scotiabank Giller Prize and shortlisted for the Lambda Literary Award. She is also the author of Valmiki’s Daughter, He Drown She in the Sea, and Cereus Blooms at Night. In this interview, Mootoo discusses  the power of Toni Morrison’s prose, the commodification of writing, and the legislation of identity.

Mootoo will be a panelist at the event Forbidden: Too Much in Love at the PEN World Voices Festival: Gender and Power. The event will take place in May.

I feel least like a writer when I am working on a book. If I think of myself as a writer, I am self-conscious and a kind of paralysis sets in. It is when I prepare a keynote address or a lecture or a speech that I get a good sense of myself as a writer. These forms require much of the same craft as writing a book, but because they are read to an audience and are themed, with a time constraint, I must make every word count. I like it most when I have a message that is urgent and must be delivered convincingly.

Toni Morrison for her clarity and for her ability to make a word, an action, a simple scene, speak volumes. But she isn’t just a magnificent writer; her stories reveal the best and the worst in all of us. Between the pages of a book she bares history naked and makes it accountable. She grasps the heart, whatever and however that heart is, with amazing wisdom and a deep sense of justice. And J.M. Coetzee. Everything I say above about Morrison, I say, too, about him.

Every time I write about same-sex love I experience the same thrill (the thrill of speaking it, as it were, out loud) and the same terror that I am opening myself up to hatred from homophobic family and friends, as I had when I wrote my first such story, “Lemon Scent,” which is in my first book, a collection of short stories called Out on Main Street.

I don’t have a favorite place, but my preference is a room with a view … and a fair bit of background noise.

To find the right word. The only word that will work. The right image. To constantly educate ourselves, put ourselves in unfamiliar places, walk in others’ shoes. To ask questions, the same ones and news ones, but again and again.

Which writers? The assumption in the question is that writers are a special breed with shared values. The commodification of writing—the business of publishing—has diluted opportunities for long, hard, and deep debate. In the climate of the forever young and the new, writers are fungible, to use a term from economics: We are easily replaced by the next discovery. The collective purpose is not noble, as the question assumes. We entertain and help to denude forests. At the same time, when two or three of us are brought together on a stage for a themed discussion, interesting debate is had and ideas best generated when we are at least somewhat at odds with one another. Finally, if we sift through the noise of social media, we are likely to find voices, some sustained, some fleeting, that can conceivably pass as a new and contemporary incarnation of something akin to the public intellectual.

We need to censor ourselves from being mean or hateful. There are certain kinds of ideas and images that are hurtful, that I wish never existed, but censorship does not make them go away. It sends them underground. I would rather know what and where they are and have strenuous debate about them, even with their makers.

I have not, but this is an interesting question. Whenever I pass through the theft sensors upon exiting a store, I feel a deep terror that they will go off and I will be publicly, but wrongly, shamed. Whenever I approach immigration at an airport, I fear I will either not be permitted to go onward or that I will be harassed. It’s not because I am culpable in either case (although homosexuality remains illegal in Trinidad, where my family lives), but it has to do with that old sense in the bones of being a person of color, persona non grata in many places, but more than that, being queer and having the long-held experience and knowledge that this aspect of my identity is legislated on many levels—by the state, in religions, in communities, and in family.

Audio books might have to be an option, because one can’t be sure how much such leaders actually read. Beloved by Toni Morrison, Coetzee’s Barbarian, Margaret Atwood’s The Handmaid’s Tale, and Orwell’s 1984.