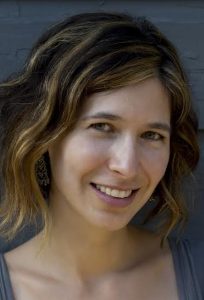 The PEN Ten is PEN America’s weekly interview series. In this week’s interview, we talk with novelist, poet, and translator Idra Novey. Novey’s novel Ways to Disappear is a finalist for the LA Times Book Prize for First Fiction and an NPR Best Book of 2016, and her most recent work of translation is Clarice Lispector’s novel The Passion According to G.H. In this interview, Novey discusses the life-altering power of reading—and translating—international literature.

Idra Novey will participate in the event Literary Quest: Westbeth Edition at the PEN World Voices Festival: Gender and Power in May.

I grew up in a backward, dying Rust Belt town where many people were wary, if not outright hostile, toward art of any kind. But my parents were an exception. They were both readers and encouraged the endless poems and plays I wrote in grade school.

In high school, I wrote the first—and I think only—student-written play ever performed at our football-obsessed school. No one but the other theater club kids in the play and their parents attended, but the intimacy of it felt subversive. There is a freeing joy in proceeding with a work of art regardless of the size of one’s audience.

It was in that empty theater in rural Pennsylvania, at 16, that I first had a strong sense that this is what I wanted to do with my life, that I would go on finding joy in writing and sharing that writing regardless of how many people living around me cared about literature or not.

On the sagging purple couch in my living room, preferably in the secret hours before 6am.

Julio Cortázar, George Oppen, and most of all the great Clarice Lispector. I’ve read her work obsessively since college. To translate one of her novels for New Directions was life-altering. I began my own first novel while translating her, and her fearlessness haunted me with every draft. If I wasn’t taking a meaningful risk, doing something in a scene that felt audacious and absolutely necessary, I deleted the whole scene and started again.

In The Passion According to G.H., the novel of Lispector’s I translated, the middle-aged female narrator declares, “I am blinder than before.” With the time we’re currently living in in this country, reckoning with our blind spots as a nation, reading a writer like Clarice, who takes the most difficult questions as far as she can take them and then even farther still, feels more luminous than ever.

Translating the words of the writers I most admire has always felt more daring to me than coming up with words of my own. It is such a complex act, and an honor, to recreate someone else’s voice in another language. Translation requires great audacity.

I wish all writers enrolled in MFA programs were encouraged to try translation, to dare themselves to slip out of their own voices and challenge their imaginations to recreate the cadence and sensibility of a writer working in another language. I learned so much about developing a distinctive tone and cadence as a writer from the daring daily act of translation.

To, as June Jordan wrote:

Social media has made public intellectuals of everyone. At any hour, online, you can find writers opining about the state of the world. I recently heard Roxane Gay speak about how social media can turn a writer into an “opinion vending machine.” Gay made the joke to explain how vending opinions like a machine is not a writer’s purpose, as tweeting and posting rarely allow for more than knee-jerk responses. But it’s such a powerful, irresistible experience to read and add one’s voice to the global knee-jerk response within a nanosecond of every major world event.

What is the collective purpose of people who consider themselves writers in this global discussion?

I think about this question constantly. It is so common to read an interview with an American writer who never references a single living writer working in a language other than English. Why is this so often the case? Is it because many American writers are only reading their fellow writers publishing in English? Or are they only mentioning other writers publishing in English so that those writers will then return the favor and mention them?

I can’t imagine missing out on the tremendous writing from other languages coming out in translation in the United States now. We are living a moment of rampant xenophobia in this country, and yet the mainstream literary discussion so often limits itself to books written in English and with the lens on reality that comes with writing with English language readers and publishers in mind.

To make a blanket statement about censorship is tricky, as it really depends on context. But I would say censorship is acceptable when it prevents making an already vulnerable group, or individual, even more vulnerable to discrimination.

Yes, I was arrested my first year in college for a trivial thing, but was handcuffed and placed in the back of a police van with a man who was on drugs and hallucinating. It was pretty horrendous. As a child I also witnessed the terrifying arrest of a family member. Those two arrests certainly informed my strong desire to teach in the Bard Prison Initiative and, more recently, at Rikers.

If such a leader was open to my book suggestions, I’d send a book every day, starting perhaps with The Politics of Denial, by psychologists Michael Milburn and Sheree Conrad.

Or maybe it would be better to begin with the poems of the imprisoned Nobel winner Liu Xiaobo, along with the poems of his equally talented wife, Liu Xia, still living under house arrest. I would fold over the page with Liu Xia’s poem “Empty Chairs,” which begins, in Jennifer Stern and Ming Di’s excellent translation:

so many empty chairs