The PEN Ten with Matthew Zapruder 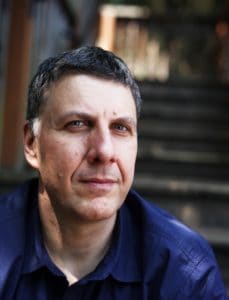 The PEN Ten is PEN America’s weekly interview series. In this week’s interview, we speak to Matthew Zapruder, whose new book, Why Poetry, is out this month from Ecco Press.

I think probably from a very early age, in ways that I was not aware of, which I suspect is true for most if not all writers, even long before they start actually writing. The writing of poetry came relatively late for me, at least in a consistent way, and I would never have identified myself as a poet as young person. I always loved words, and reading, and songs, but had never devoted myself to writing. Looking back, I can see that at various times I had taken tentative steps, but maybe I just wasn’t ready, or was afraid. At some point, when I was in my early 20s in graduate school studying Russian literature and reading a lot of poetry, the urge to try to make my own just got to be too powerful. Once I started, I never stopped.

I don’t think I want to steal anyone’s work, though of course there are many writers I read, especially poets, and think, if I could get that effect, I would be so happy. One person who comes to my mind is James Schuyler, since a lot of the time it seems to me his poems are almost not poems, more like diary entries or rambling observations, but reading them I am filled with the most undeniable feeling of experiencing true poetry. It’s a mystery to me how he does that, almost by not doing anything, at least not overtly. There are however definitely many people whose writing rituals, or writing lives, I would gladly steal. Twyla Tharp, for instance. People who have managed to organize their writing lives in ways that seem calm, focused, and consistent. My life is not any of those things!

I started to make a list of the things I am obsessed with, and I realized there are so many: bands, writers, objects, particularly musical equipment and typewriters and books. To be specific, there is one edition of one book I am obsessed with: it’s the Oxford University Press edition of The Lost Domain, aka Le Grand Meaulnes, by Alain-Fournier, translated by Frank Davison. It’s a little pink book with a line drawing of a dilapidated gate leading to an estate blocked by trees. World’s Classics # 569 (Madame Bovary is 564). I suppose if I had the time and space and money, I would try to collect first editions of every single one of these World’s Classics, and take the rest of my life to read them.

I ended a recent poem called “Paul Ryan,” in which I basically describe him as a homunculus grown in a lab by demons, with lines in which I say I will refuse to drink the hate that animates his corpse. The poem ends: “Paul Ryan/ I love you/ I kiss/ your dry lips/ to defeat you.” I don’t know if it’s daring, but it felt both completely appalling and totally real to me.

In a studio, surrounded by shelves of my books in alphabetical order so I can find them with ease. It doesn’t have the internet, which is great for obvious reasons. All the reference books I need are there. It’s in the middle of a small grove of trees, and the skylight above my head as I sit at my desk admits dappled sunlight. My record player is there, and my guitars, and my favorite typewriters, each at a different little station I can move to when I feel moved to. It’s just a short bike ride from my house, so I can get home and see my son and wife with ease as necessary or desired. I go there every day for a few hours, and everyone is happy to see me go, and also to return. Now all I have to do is find it.

As a writer, to write as much or as little as personal necessity dictates. As a citizen, to put a queer shoulder to the wheel, just like the rest of us, to help move us forward and save us. Based on my experiences hanging out with them, I am quite sure writers do not have any special gift of prescience or analysis. Nor are they gifted with some status that exempts them from the obligations of citizenship.

As I understand the question, you seem to be asking if writers have a special purpose that relates to all of our collective lives: that is, how we as a society, country, species, etc., live together and will survive. I don’t know if I would exactly call it a purpose, but I do think everything writers do—preserve the language, think with care and empathy, protect imaginative spaces within themselves and their readers, carry the rarer light of culture forward despite all the banality and nonsense that surrounds us, and so on—inhere in the act of writing well itself. So if writers are writing as best as they can, they are fulfilling their collective purpose.

Hm. Sorry, I guess I have a boring, humanist answer that it’s better to bring such things we might be inclined to censor out into the light and let their ugliness be revealed and argued against. The alternative seems fraught and far more likely to be ineffective. That being said, I am starting to wonder whether there doesn’t need to be, if not censorship, then at least some kind of societal response (like depriving people of use of free airwaves that belong to us all, or should) when there is systematic abuse of facts. I’m of course thinking of things like Fox News, where unctuous “news” anchors just “report” all sorts of “facts” that of course are not. It does seem like a slippery slope from there to censoring opinions that whoever is in power does not like though, so I’m really not sure what to do. As far as censorship of literature though, I think the answer still for me is, never.

Any time the government is watching you, it is surveillance. Any time a novelist is watching you, it is observation. Unless for some reason that novelist works for the police, or NSA, which I guess in this world is just absurd enough to be possible. Poets are incapable of surveillance. It takes far too much time, and requires one to sit for a vastly longer time than any self-respective poet would accept.

Such a person is unlikely to be someone who is moved by what he reads, at least not in positive directions. If I knew he absolutely would be compelled to read whatever I sent, which again seems unlikely, I think I would send him In Search of Lost Time. For one thing, it would keep him busy for a while. For another, it seems to me impossible to imagine that someone could read that book and come out on the other side less human. Or maybe The Lost Domain. But not my copy.

Matthew Zapruder is the author of four collections of poetry, as well as Why Poetry, a book of prose, out this month from Ecco Press. He has received a Guggenheim Fellowship, a William Carlos Williams Award, a May Sarton Award from the Academy of American Arts and Sciences, and a Lannan Foundation Residency Fellowship in Marfa, TX. An associate professor in the MFA at Saint Mary’s College of California, he is also editor at large at Wave Books, and from 2016-2017 held the annually rotating position of editor of the poetry column for The New York Times Magazine. He lives in Oakland, CA.

The PEN Ten with Malka Older

The PEN Ten with Dani Shapiro