The PEN Ten with Marcus Wicker 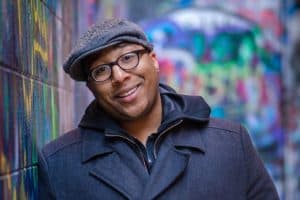 Marshell writes: Poems are the meeting places where Marcus Wicker’s myriad interests join together in song. There is, of course, how he marries music with politics, with life—his own young black male one, and others’, some ongoing, some snuffed. But better yet, as you’ll notice in this conversation and in his work, it’s not just his broad influence, but the many-toned ways he expresses them, that make his poems sing—e.g., his “Ode to Browsing the Web” (of all things) and “Conjecture on the Stained Glass Image of White Christ at Ebenezer Baptist Church.” “Why crucify me in HD across a scrolling news ticker,” he writes in the latter poem, and “Is this thing on?” It is—capturing the many sounds, words, questions of a great poet’s mind at work.

I’m a person who juggles multiple interests—music, social justice, art, film, boxing, popular culture. Often my identity as an African American and teacher are the lenses through which I address those interests on the page. Maybe there’s such a thing as “the writer’s identity,” and if so, I’d like to think of mine as productively dissociative. I love to employ different schools of diction, subvert fixed forms, employ a swaggering voice one day and an oblique approach the next. Writing this way combats boredom when I’m at my desk, keeps me going.

I always tell my students: Just because X happened in real life, doesn’t mean real life serves a poem’s particular narrative or aim. But I must admit, in this new word of “alternative facts,” I’ve been thinking about how much is too much emotional manipulation when it comes to writing about social issues, because it seems to me that emotional manipulation has a lot to do with how and why our current, less-than-adequate head of state was elected. All I can say is that, when in doubt, I consult my moral compass and try to appeal to my better angels.

I am absolutely one of those writers, inspired by hip-hop lyrics, a jazz sensibility, and a number of literary foremothers and fathers I’m often in dialogue with. The obvious line is acknowledgment—giving credit where credit is due. But more than that, I’m of the mindset that if you write a poem after another writer without tackling something new and unique to you, then you haven’t done your job.

I’m always resisting the urge to overinvest in my happy, important bill-paying life—teaching, touring, miscellaneous poe-biz—in order to nurture personal relationships, make room for self-care and the actual writing of poems (a.k.a. the things that are absolutely necessary to my well-being).

Silencer is heavily invested in traditional forms of resistance. Particularly the resistance of institutional inequity and straight-up intolerance.

There will always be a special place in my heart for those of us who find ways to express our beliefs and life obsessions absent of politics and megaphones. Trump’s budget proposal, which calls for an elimination of the NEA, is a blatant attack on artists, humanists, and their potential to effect change through the exchange of powerful ideas. The life of an artist—especially a “subversive” artist—is difficult and humbling. The NEA makes our chosen vehicle for free expression just a bit easier. Losing the organization’s symbolic and fiscal support scares the hell out of me.

It took me a long time to admit to myself that I was burnt out/turned off by some of the hypocrisy and meanness I’ve witnessed in various churches over the years. And yet, I believe. I address the guilt I feel over this stance in “Ars Poetica”—one of those rare poems that spilled out of me all at once, very quickly. Putting a period on that piece felt like one of the most daring, liberating confessions I’ve ever made.

The first couple of things I published, yes. I chalked them up to youth, inexperience with revision, and wrote more poems while waiting for Google to bury the search results.

All of the above. I love to surf Twitter for new poems when I need a little lift, and sometimes I share what I like. But I’m not very active in the Facebook poetry sphere. In fact, I took it off my phone because there’s too much going on there, and it’s anxiety-inducing for me.

9. Your second collection of poems, Silencer, which addresses current conversations on race and police brutality, was published last fall. What was the very first seed toward writing this book?

When Trayvon Martin was gunned down, and media outlets—TV news, Twitter, and online publications’ comment sections—began to chime with around-the-clock updates and gross, ideological commentaries, I was both glued to the coverage and terrified to engage, out of communal grief and fear, but also because the sound of the spin doctors was so grating. Ditto the rhetoric coming from closet racists’ Facebook pages. I suppose, more than anything else, I wanted to turn the volume down so that I could write, make sense of my strong emotional reaction. To do so, I stripped away gory case details, political angst, and wrote a subdued poem responding to Trayvon’s murder. During the revision process I dubbed the poem a “silencer.” And tragically, over the next several years, I found occasion to write others.

10. If you had to choose just one person to read your work, who would it be?

Definitely a tie between Barack Obama and Black Thought.

Kyla Marshell’s work has appeared in Blackbird; Calyx; ESPN; Gawker; The Guardian; O, the Oprah Magazine; and SPOOK. Her work has earned her Cave Canem and Jacob K. Javits fellowships, two residencies to the Vermont Studio Center, and an MFA in Creative Writing from Sarah Lawrence College. In 2013, Ebony.com named her one of  “7 Young Black Writers You Should Know.” A Spelman College graduate originally from Boston, she grew up in Silver Spring, MD; Morehead, KY; and Portland, ME, and now lives in New York.