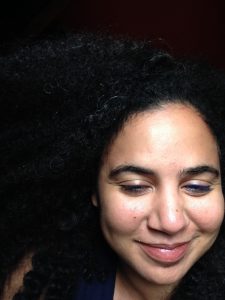 The PEN Ten is PEN America’s weekly interview series. This week, Guest Editor Kyla Marshell speaks to Laura Swearingen-Steadwell, whose new poetry collection, All Blue So Late, will be released in December from Northwestern University Press.

Marshell writes: The misanthropic sea hissed. Space grew long, / polishing its dark blade, stars two thousand nicks / on its edge.” These are the dark-hued lines that compose part of Laura Swearingen-Steadwell’s “Caldera,” from which the title of her second collection, All Blue So Late, comes. In this poem, and in others, there is the mere suggestion of something—a lone figure, a lone image—that carries with it a familiar heft: the author peering in, revealing something of herself that happens to be true of you, too; and better yet, giving shape to the ineffable.

1. When did being a writer begin to inform your sense of identity?
I started reading when I was two years old, according to my family. I brought books to the dinner table, kept reading them after I was supposed to be sleeping. Reading was the spark, for sure. My father encouraged us to write, though. He got us journals and told us to make use of them. I did, writing crazy mysteries with a fictionalized version of our pet poodle as the hero and cameos by people in the neighborhood. I wrote poems, too; I liked the puzzle of them. Writing in form seemed like the coolest thing in the world to me, like writing in secret codes.

It wasn’t until junior high that I wrote poetry in earnest, when depression and irreconcilable differences with society (that is both as pretentious and as true as it sounds) gave me a need for it. That’s when I began to be serious. I took my notebook and pens with me everywhere. Even during parties, when everyone else was being social and having fun, I’d be in the corner scribbling notes.

2. Whose work would you like to steal without attribution or consequences?
Ah, I can’t even answer this question as a joke. Plagiarism is the mortal sin. As a queer woman of color, I know how much appropriation has damaged marginalized communities. I could and would never take someone else’s voice on purpose. I have, to my horror, discovered lines or images I’ve accidentally lifted from others, though, and that stings, badly.

3. Where is your favorite place to write?
At my desk, with a window on the world.

4. Have you ever been arrested? Care to discuss?
When I was 19, I think, I was arrested by a bike cop in my hometown, D.C., while in a van with three diplomat’s kids and one other American. The diplomat’s kids who were in the driver’s and passenger’s seats were of the African diaspora, or else we probably would never have been stopped. Those two announced their immunity and were whisked away. The American, the Afghani, and I spent a night in jail for possession (there was weed, hash, and paraphernalia in the car), then all our charges were summarily dismissed.

5. Obsessions are influences—what are yours?
Injustice, desire, the wonder of the natural world and of love.

7. What is the responsibility of the writer?
To bring us all back to feeling. To break the walls we’ve built around our emotional truth.

8. Has the role of the writer and artist changed at all?
There are more of us making noise now, given social media. It makes it easier to be heard, at least for a moment.

9. While the notion of the public intellectual has fallen out of fashion, do you believe writers have a collective purpose?
I don’t think it’s out of fashion. What about Roxane Gay, Ta-Nehisi Coates, and Claudia Rankine?

10. What book would you send to the leader of a government that imprisons writers?
Baldwin, Vonnegut, Lorde. Would it matter? Those three are good primers, either way.

11. Where is the line between observation and surveillance?
If I’m aware you’re watching me, that makes all the difference in the world. Permission.

12. Has the role and importance of narrative changed in this new digital landscape where false narratives and fictions are taken as truth?
At its heart, the emotional truth of a poem matters the most. In nonfiction, a fact is a fact is a fact. The end.

Laura Swearingen-Steadwell is a graduate of Warren Wilson’s MFA Program for Writers and the author of All Blue So Late, winner of the 2016 Cave Canem Northwestern University Press Poetry Prize, and How to Seduce a White Boy in Ten Easy Steps. She works as an editor and a teaching artist and lives in Brooklyn, New York.

Kyla Marshell’s work has appeared in Blackbird; Calyx; ESPN;, Gawker; The Guardian; O, the Oprah Magazine; and SPOOK. Her work has earned her Cave Canem and Jacob K. Javits fellowships, two residencies to the Vermont Studio Center, and an MFA in Creative Writing from Sarah Lawrence College. In 2013, Ebony.com named her one of  “7 Young Black Writers You Should Know.” A Spelman College graduate originally from Boston, she grew up in Silver Spring, MD, Morehead, KY, and Portland, ME, and now lives in New York.