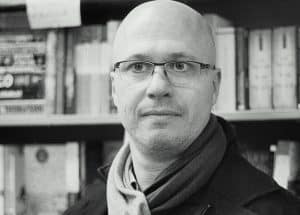 The PEN Ten is PEN America’s weekly interview series. This week, we speak with the novelist Aleksandar Hemon. Hemon is the winner of this year’s inaugural PEN/Jean Stein Oral History Grant for his work How Did You Get Here?: Tales of Displacement, which the judges called “a humanized history of immigrants fleeing genocide and war in Bosnia.” In this interview, Hemon discusses butterfly hunting with Nabokov, the responsibilities of protecting public space, and the democracy that is literature.

Aleksandar Hemon will participate in the panels Forbidden: Too Nationalistic and Pen vs Sword: Satire vs the State at the PEN World Voices Festival: Gender and Power in May.

When I started getting published, which exactly coincided with my becoming a writer.

There are many Nabokov sentences I wish I had written. But I’d rather have had tea with him or gone on a butterfly hunt.

Words mediate danger. I long for them to be daring, but they’re never as daring as I hope. The most daring thing I’ve ever done is have children.

Anywhere. No mystique there. I write in airports, on airplanes, on trains, in office spaces. I have a hard time writing on writing retreats.

To write, obviously. To have an ethics and an aesthetics, therefore a politics. There is a particular responsibility in having access to public space: to use it, protect it, share it, respect it. Literature is inherently democratic.

No, because I do not believe that writers automatically share their political positions. There are writers who are my political, ethical, aesthetical opposites, even enemies. I think it is a terrible mistake to assume solidarity among writers. Such an assumption diminishes literature as a public space where ideas can interact and be in conflict. I don’t want to be a member of a club.

I was detained for a day by the State Security once, back in Bosnia, when I was in my 20s. The story of that is The Book of My Lives. It was not so much scary as it was humiliating. I decided after that that I should know what I am saying and why, in case I get arrested.

Whatever insults and enrages the leader most. In most cases, any book that doesn’t confirm what they already think. The role of the people in any democracy is to drive their leaders crazy with demands. Ask not what you can do for your country, but what it must do for you.

If you see friends and family sharing misinformation about a critical issue like COVID-19, an election, or a political candidate, what do you do? Learn how to stop the spread of misinformation in your closest circles with our tip sheet: https://bit.ly/2ZnZ7qt. #WhatToExpect2020

Actress & activist Alyssa Milano (@Alyssa_Milano) is one of 100+ writers, artists, academics & public servants who penned short essays for the #WeWillEmerge project, a multi-vocal statement that imagines a blueprint for a post-COVID world. Read more: https://bit.ly/3iNsCK8.