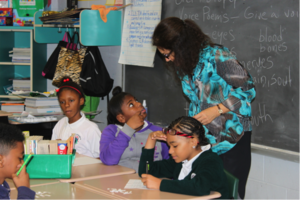 To celebrate ten years of PEN America’s visiting authors program, Children’s & Young Adult Books Committee authors Selene Castrovilla and Orel Protopopescu dropped in on classrooms at the MLK Charter School in the 9th Ward on February 3, 2016. They shared highlights from their trip with us. 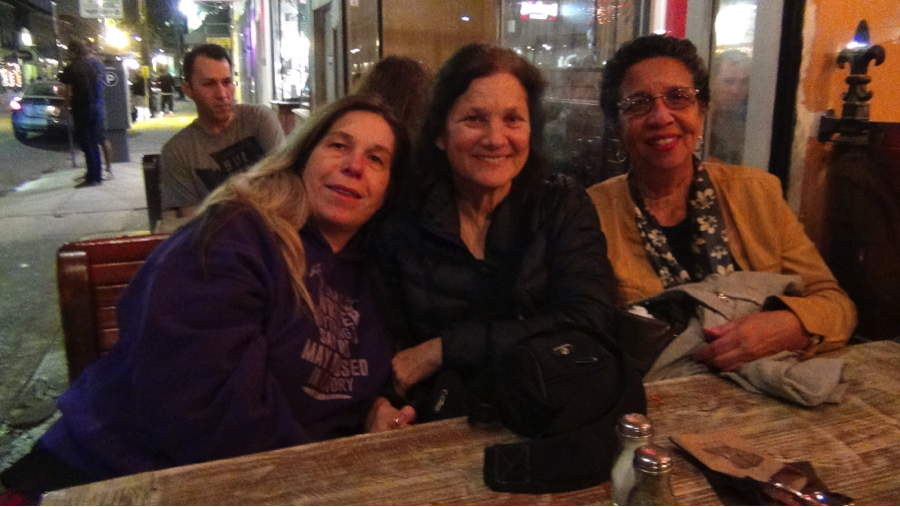 Orel: At MLK Charter School, a cheerful, well-lit space with hallways filled with the children’s writing and artwork, Selene visited Grades six, seven, and eight, while I was with Grades three, four, and five. The children were already familiar with the two picture books of mine I’d sent, Two Sticks and Thelonious Mouse, both illustrated by Anne Wilsdorf and published by Farrar, Straus and Giroux. One of the fourth-grade classes had written their own versions of the verses in Two Sticks, cleverly imitating my rhythms and rhymes. There were even two gorgeous posters welcoming me in the hall! 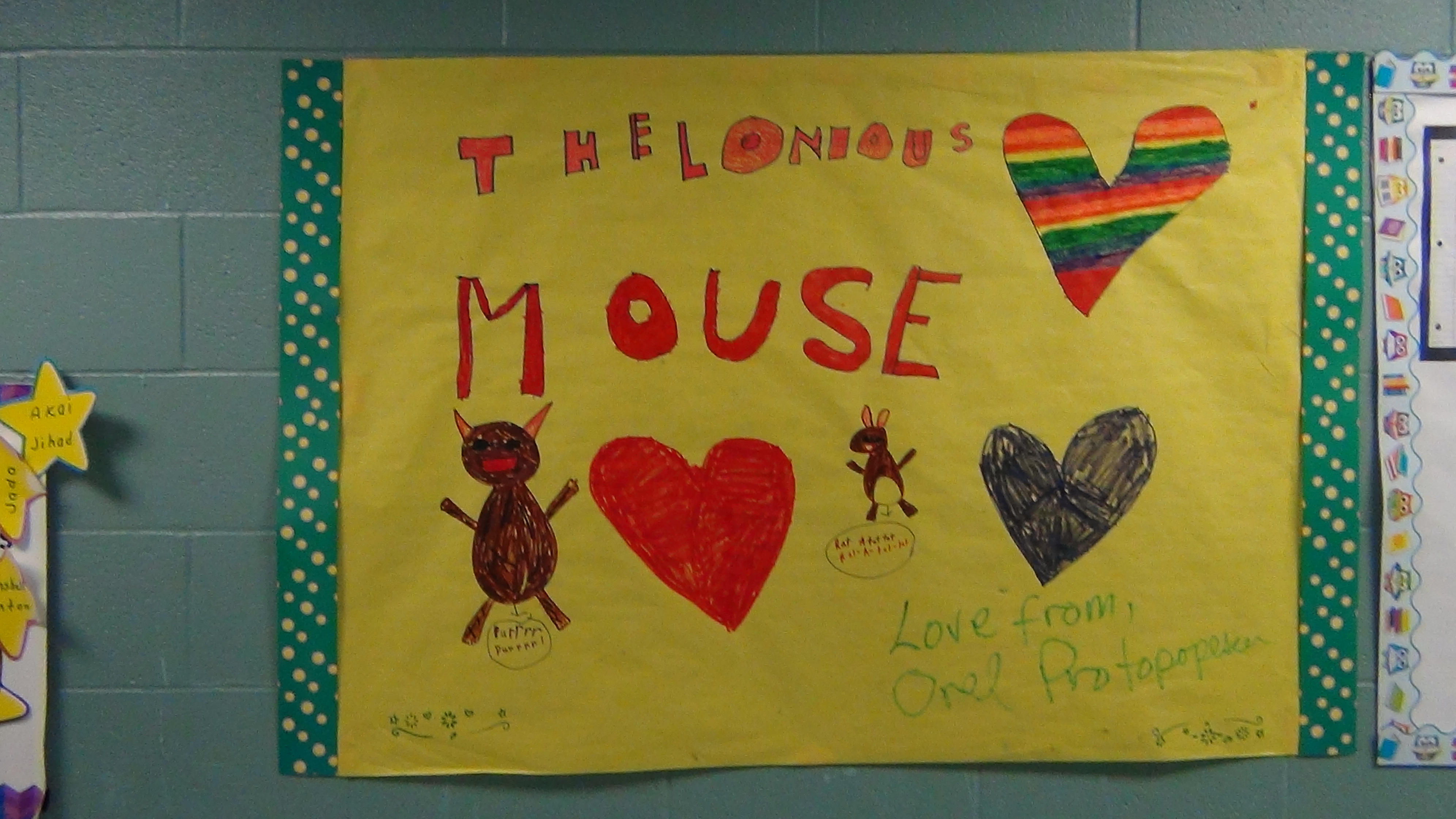 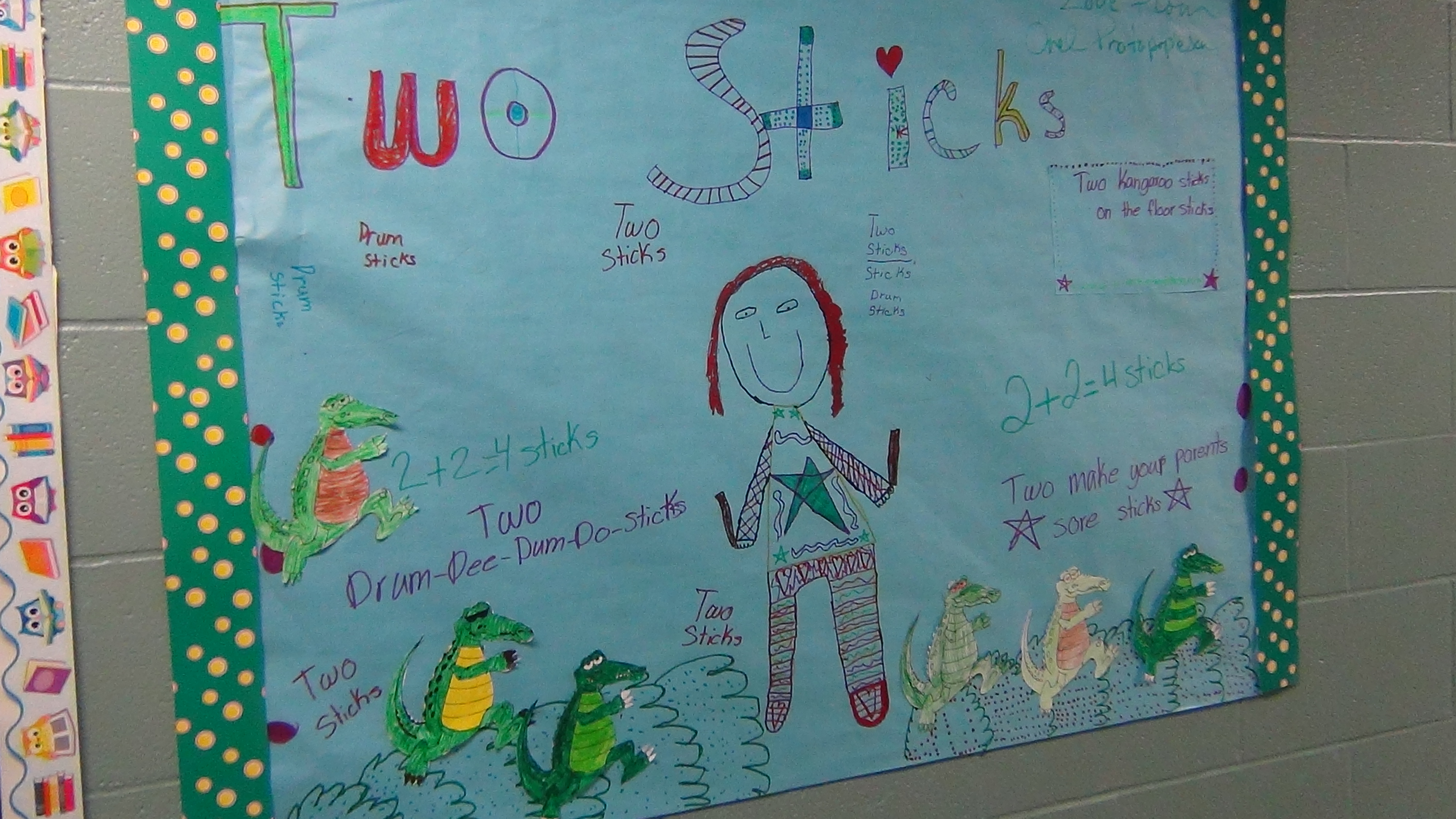 In all three classes, I began by talking about metaphor, including a famous one from Dr. King, the school’s namesake, taken from the agitating arm of an old-fashioned washing machine (“I am an agitator”). I pointed out some of the types of comparisons (both metaphors and similes) in my books, and talked about how language drives plot.

The children wrote poems with personified characters. I gave them one rule: They were not to write in the voice of any living person. I also advised the children to “write what you don’t know about what you know”—that is, to tell us the secret stuff that only the narrator of their poem in an “I” voice would know. Even the youngest children in the groups understood that the “I” of this style of poetry was not the self. I was so impressed! We shared some sample poems, comparing my “Eraser’s Song” to Eve Merriam’s “Eraser” and reading Beverly McLoughland’s “Squirrel and Acorn,” a poem written in two contrasting voices.

Most of the students did not choose to write in human voices (such as speaking for their ancestors or characters from books), although I gave them that option. They preferred to find inspiration in my word box of nouns.

“Volcano” was popular with the third graders. One volcano told us, “My heart burns up when I tear your home apart” and that “all trees hate my voice.” Who knew? Another volcano confessed, “My mouth can breathe with fire and soul.” (I had written all five senses on the board, along with relevant body parts and words associated with emotion, like heart, soul, fear, friend, enemy, dream, etc.)

Darkness told us he was “best friends with the moon.” The moon, in another third grader’s poem, told us, “My dream is to be bright enough so that you can see me any time.” Daisy said, “I am sweet from the bottom of my heart.” Echo said everything twice.

Forces of nature were popular narrators among fourth and fifth graders, too. In one poem, a stream was “waiting for fish / All alone with no soul, / Hoping they come home.” A bee admitted, “I love to see my honey making money.” A weary pair of hands said, “I clean every day…I hope they make me stop working.” Another tornado, this one “a big cast of wind,” said, “I scoop up things like a hand” but wished only to “stop destroying all.” A brain said, “I hear your heart when you cry / A skull surrounds me like a gate…”

So many surprises in these poems! No one was forced to share, but almost everyone wanted to. Our sessions ran over time.

It was hard to tear myself away from each group when my time was up. The warmth of the children and their teachers carried over into the rest of our brief stay in New Orleans. 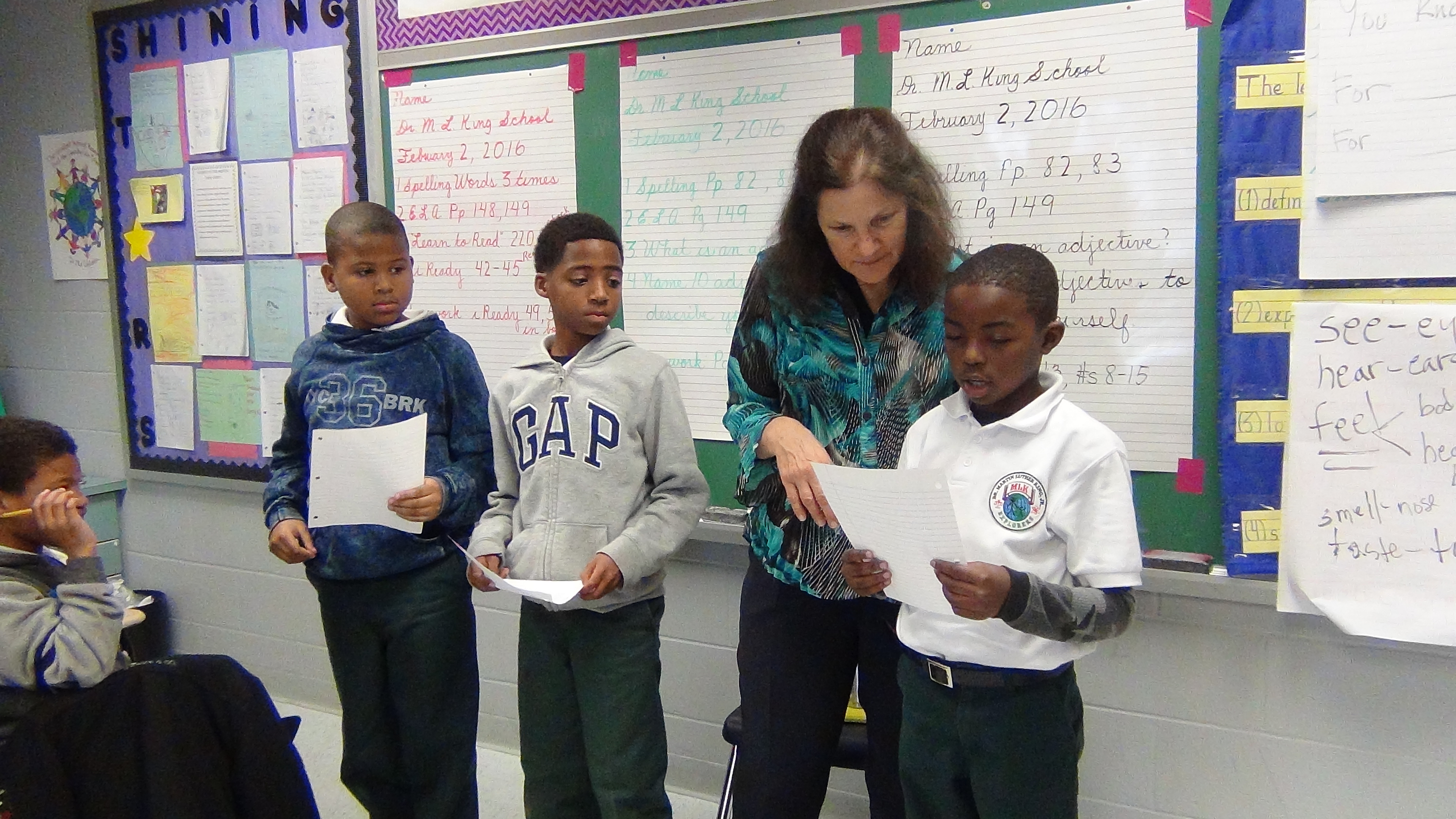 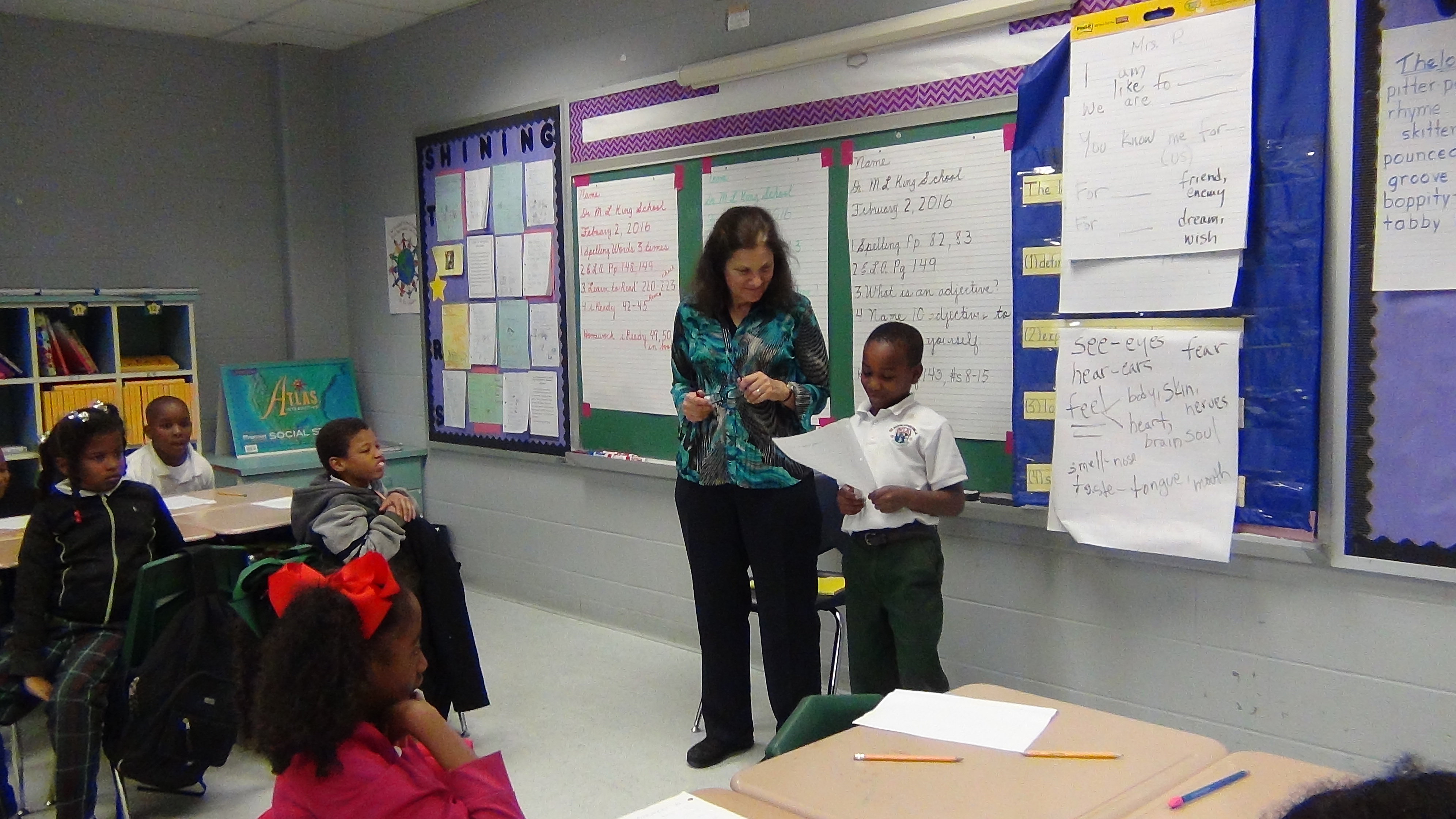 Selene: I visited with sixth, seventh, and eighth graders. I was pleasantly surprised to learn that the eighth graders had been reading my novel The Girl Next Door prior to my arrival. They were brimming with questions, and eager to discuss my writing technique. We had a forum, where I not only shared how I got my start in writing but addressed their well-thought-out questions. We achieved a depth never (until now) reached during middle-school visits. The thing I wanted to impart upon them most was that I was just a person who knew what I wanted to do, and then did it. If I could do that, so could they. We also discussed the human condition, and how humanity is at the core of all my work—and all of literature. Despite outer differences, humans have emotions in common; our decisions tend to be ruled by them. This makes great fodder for fiction and nonfiction.

The sixth and seventh graders had read my nonfiction picture book Revolutionary Friends. They were especially fascinated with Marquis de Lafayette, the Frenchman who was only a teenager when he arrived in the United States to fight for the Americans in the Revolutionary War. We discussed what led him to leave his family and country to help a bunch of scrappy rebels. This conversation introduced the students to the concept of core belief systems and conscience. What is worth fighting for? What is worth dying for? We discussed Lafayette’s close friend George Washington, and how true identities are revealed in stressful situations—which is what makes war such a great subject with which to explore human nature. We also discussed the research process, starting with how I get my ideas for nonfiction and why I choose to pursue some ideas over others. We spoke about how the same story can be explored so many ways, through the eyes of different characters and by the tone the author chooses to take.

Orel and Selene: An extra bonus was having Fatima Shaik, our PEN chapter co-chair, in town that very week. She took us to her house and the French Quarter, and we enjoyed a memorable lunch at Dooky Chase, a popular Creole hotspot. Jazz musician and New Orleans native Irvin Mayfield happened to be dining at the next table! (Selene told him about her book on dancer Savion Glover, and to our surprise he said he would be playing the Apollo with Savion in October. Serendipitous.) We also enjoyed seeing Karen’s house, filled with the paintings of her talented son.

We were back at the school on Friday morning to take pictures for the 10th Year Celebration of the visiting authors program.

Now we know what it means to miss New Orleans, as the Louis Armstrong song says. We are so grateful to PEN America, Karen, Fatima, Dr. Doris Hicks, the principal of MLK Charter School, and the students, staff, and teachers who made our stay unforgettable.