PEN Basque: The Best Time For Basque Literature Has Come 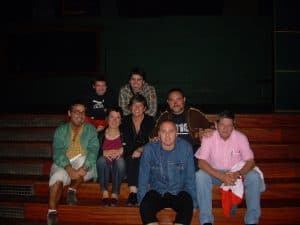 In this series, PEN America interviews the leaders of different PEN centers from the global network to offer a window into the literary accomplishments and free expression challenges of their respective countries. This month, we spoke with Urtzi Urrutikoetxea, president of PEN Basque

Representing the Basque city of Donostia (San Sebastián) that is the European Capital of Culture 2016 (DSS2016 for short), we have been working with different projects related to the languages and the linguistic rights under the umbrella of DSS2016. In February we had a full weekend of activities related to the refugee crisis and how languages, especially the Basque language, are a bridge for everyone living here – regardless of their origin. In June we coordinated a visit by 30+ Sami writers from Norway, Sweden and Finland; PEN is also one of the organizers of the Congress that will be held in December. We expect an important Protocole (protokoloa.eus) to be adopted there, to support the provisions of the Declaration of Linguistic Rights of 1996 and the Girona manifesto, with specific measures for language protection.

Abroad, we have taken part in different meetings and congresses and we are specifically proud of our humble but important contribution to the freedom of the Kurdish journalist Adnan Hassanpour. He was arrested 10 years ago and condemned to death. Soon afterwards we declared him our Honorary Member, invited his family to the Basque Parliaments in Gasteiz (Vitoria) and Iruñea (Pamplona) and have since been in touch with his sisters. The death condemnation was not upheld, but he still had to serve 10 years in jail. One month ago, in September, his sister Jila visited us in Bilbo (Bilbao). She was very excited because Adnan was about to be freed – two days later, he walked out of prison.

Our country is divided between Spain and France, and our language does not enjoy the same recognition everywhere. Consequently, Basque TV is not able to be received in different parts of Eastern Basque country (Navarre) because of the attitude of the former Navarrese government. This means that for the last 5 years or so children there were able to watch cartoons in Spanish, English, and any language other than Basque. The new government has a more positive attitude, but still many children cannot watch Basque TV. The same is true for education. While some can freely study in Basque, others, even small children, had to travel to different towns. We approved a resolution on this at the 2013 Congress in Iceland.

Additionally, our armed conflict has until recently caused different attacks against journalists, including armed attacks, closure of newspapers and other media outlets, and imprisonment of journalists. Luckily this all seems to have ceased for the last few years. Yet, at the same time, some of the attitudes Spain had towards the Basque country are still present with the so called ‘gig law’. NYT, Time, The Guardian and others have expressed their criticism of this law.

It is possible to say that we are in the best period of Basque literary tradition. Even though the first book in Basque was printed in 1545, it was not until the 20th century that a real literary tradition, in line with world trends, emerged. The first decades of the century were brutally disrupted by the Francoist putsch and the oppression, but since the late 50s/early 60s new authors emerged. For the first time most Basques can read and write in their own language, and we have thousands of new speakers. As a result, we are enjoying the 3rd or 4th generation in a row of writers who studied in Basque, who can read poetry and novels written in Basque; at the same time, the translation of both classical and modern books has improved a lot. We are very often are self-critical and lament a lack of readers, but after talking to writers in widely spoken languages such as Spanish, we realize that they do not publish many more copies than we do, despite having exponentially more speakers.

On top of that, while oral improvised poetry has always been successful, it has renewed itself. It is taught at many schools to thousands of students, and in this modernization it ceased to be a mere traditional singing poetry. It has become – without giving up roots- an activity that attracts youngsters, and that is merged with other forms of artistic expression, such as literature, music, rap and so on.

Besides what has been already said, we also have a very active literary discourse, including many monthly reader’s clubs that discuss a book they have read; the writer is often present. Additionally, there are many poetry readings such as the Eako Poesia Egunak (Ea – name of a village – Poetry Days), Hatsa Poesia (Poetry Day, organized in the Northern – French-Basque – town of Senpere), and Literaturia (Literary market and festival). The biggest one, Durangoko Azoka, begun in 1965, organizes a huge market in early December where publishing houses, authors, musicians, readers, students and fans can get together.

By far the most awarded, translated and renowned writer is Bernardo Atxaga. Mariasun Landa writes children’s books which have been translated and given awards many times. PEN member Kirmen Uribe is perhaps the best known for among the younger generation, and has, thanks to the translator Elizabeth Macklinalso, often attended PEN America activities.

Perhaps less well known abroad is Joseba Sarrionandia. His poetry, novels and essays – many of which have received awards – have captivated Basque readers since the 80s, particularly because of his life-circumstances: he was imprisoned in 1980 for being a member of ETA, but managed to escape in 1985 and has since lived hidden, continuing to write and publish.

Our PEN Board Member Laura Mintegi is also one of the writers most translated into English. And in recent years other PEN members such as Eider Rodriguez and Karmele Jaio have also published stories that were acclaimed by the critics and the readers alike. Just last year English PEN awarded a grant to support the translation of Karmele Jaio’s work, “My Mother’s Hand.”