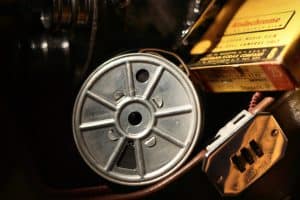 K. Robert Schaeffer was awarded Third Place in Fiction in the 2017 Prison Writing Contest. Schaeffer is currently incarcerated at the State Correctional Institution in Pennsylvania.

Diversionary spectacles had been few and far between in the year of SCI—Bentham, that is, at least until the advent of self-proclaimed film prophet Gustachion Amfitheatrof, a stout and elderly Greek well into his 40th year of incarceration. For those who even cared, rumors abounded concerning Gustachion’s life story, crime, and sentence. The man himself was known to absently rebuff such inquiries, telling nosy inmates that his mind was so crammed with filmic scenarios that he could no longer distinguish with any certainty the events of his own, actual life. For nearly 25 years, Gustachion happily and contentedly devoured tens of thousands of films, watching them on the 13-inch Keisuke ViewPro personal television in his tiny cell, eyes locked in rapture, until one day, during an inauspicious viewing of Dreyer’s Day of Wrath, when he finally developed unsustainable corneal abrasions and soon after went blind. A harrowing depression followed, during which time Gustachion shunned all company (he was never that sociable to begin with) and took to wandering the yard alone, stumbling around the quarter mile track in a dizzying void, occasionally mumbling to himself. But then he found solace with the realization that hundreds, even thousands, of the films he loved so dearly were preserved in his mind, complete with shot-by-shot descriptions and cast facial recollections, picture-perfect images screening upon the inner dome of his skull on a near ceaseless basis. He took to setting himself up below the loudspeaker, the round block of concrete at its base one of the few places in the yard to rest his aging hips (the bleachers being under the dominion of various noisy broods of hooligans), and recounting to unseen crowds the films screening for his perpetual enjoyment, intermittently interrupted by the tinny, garbled P.A. announcements from the speaker overhead.

Initially, it’s safe to assume, he was scoffed at, subjected to pointing fingers and indiscreet jeers, in time even coming to the attention of the mildly concerned psychiatric staff (his recommended medications being stoically refused). And so, to empty venues, to deaf ears, the man offered beautiful renditions of Eggeling’s Diagonal Symphony and Smith’s Abstraction #2, of Dimensions of Dialogue and Meshes of the Afternoon, of Tarkovsky’s Rublev, Lynch’s Lost Highway, Goll’s Ham Diluvial, of the silent classics of Keaton and Méliès, of all form and variety of New Wave, of impoverished, convoluted noirs and the heady choreographies of Busby Berkeley, of films, essentially, transcending genre and classification. Some of these transitioned seamlessly from one plot to another, surreal blends of Ford and Godard, of Kaurismäki and Kiarostami, and on certain rare occasions Gustachion even recounted entirely fabricated films, either intentionally or not, molded together from the formulaic bits and pieces scattered throughout his cerebral archives. In other environments, perhaps, in those more culturally-advanced societal systems found at times across the world, such pure poetic genius might be deemed worthy of commendations and pensions, recognized as the kind of noble figure suitable to adorn various-sized currencies and to serve as the namesake of schools and government buildings, but within the feeble-minded, philistinic ambience of Bentham, Gustachion’s supposed lunacy went entirely unappreciated for nearly 10 years. Countless epics lost on the wind.

In fact, it was not until 2026 that the man’s talents were finally recognized, said re-evaluation ultimately prompted by the downfall of cable television. Following a long struggle, networks were finally overcome by a deluge of advertisements, all of which were sorely needed to balance the disproportional costs of modern-day broadcasting, until eventually the programs themselves, after being sliced into smaller and smaller segments, became nonexistent and the medium collapsed, its brittle infrastructure already worn thin after decades of growth in the personalized online media marketplace. Meanwhile Bentham, notoriously lethargic in the adoption of new technologies, fumbled for a replacement, and it was only when every television screen in the prison went dark and the hordes of fiendish inmates became starved for traditional forms of cinematic entertainment that crowds gradually began to accumulate around the ranting cineaste, slumped as always upon the concrete block under the loudspeaker. A good-intentioned neighbor, Blagoveshchensk, eventually stepped in to help coordinate the events, catering to popular requests and in general tending to steer selections away from the moving, auteuristic pieces favored by the prophet toward edgier, more violent and lascivious commercial fare. At some point, and unbeknownst to Gustachion, Blagoveshchensk was strong-armed out of his role as master of ceremonies, in a nearly bloodless coup, by a group of highly disreputable neo-orphic fanaticists, charging admission fees and subliminally directing the old man toward explicitly erotic recollections during select times of the day. But for Gustachion this all made little difference. In the cinema behind his darkened lids, it was business as usual. Reel after endless reel.

But so today, for instance, for the afternoon yard double feature matinée, and for the reasonable cost of either a 1.32 oz. can of Cattle Brand smokeless tobacco or a 4 oz. bag of Señora Encarnacion freeze-dried premium coffee (net value $4.33 U.S., of which, by the way, Gustachion saw nothing), an average Bentham inmate might enjoy the eloquent recitation of V. Secundra Roychowdhury’s Bollywood action classic Sahib Shabatai, on the (not entirely historically accurate) rise of purported judaic messiah Sabbatai Zevi, and (though never delivered on the particular day due to a sudden termination of yard resulting from adverse meteorological conditions) Jack Arnold’s Incredible Shrinking Man. And it ends up being a pretty good turnout, the rapacious neo-orphics literally cleaning house in terms of impending nicotine and caffeine consumption. The crowd, surly and rambunctious as usual, assembles in a malformed globular mass around the speaker post, and after several chaotic minutes devolves into a sudden, hushed silence, parting reverently as the old Greek meanders blindly up to the concrete block and assumes his usual position, babbling to himself all the while, those pressed up in the front rows sporting drooping, starstruck mugs. A nearby event coordinator passes forward a megaphone of rolled cardboard, which is ultimately pressed against the man’s chest, Gustachion groping for it comically and then lifting it into position, his voice resonating in a deep and scratchy baritone, proclaiming thus:

A crack of thunder sounds, the sky suddenly darkening, startled inmates momentarily uncertain if perhaps it’s all part of a new special effects package, somehow brought on by the old man for dramatic effect. But the realization sinks in as the plot is interrupted yet again, the speaker actually rattling upon its posts as the P.A. barks of the yard’s termination. The crowd emits a communal groan as gigantic droplets pelt them from the sky. Guards appear in amphibious-looking rain gear, herding them back to their housing units. A flash of lightning touches down in the distant woods. The film’s climax—in which Zevi, while on duty at this new post as the sultan’s doorkeeper, witnesses the floor tiles morph into a stairwell leading deep into the fiery netherworld; descends and there wrestles Muhammad upon an ashen plateau, surrounded by taunting infidelic ghouls; returns triumphant only to find the world mid-apocalypse, humanity being brutally raped and pillaged by untold forces of evils; confronts the sultan, now a massive, many-horned, clawed, and bearded chimera, and does battle with the things over the bubbling, molten waters of the nearby sea, ultimately smiting it with the sword of En Sof previously retrieved from hell; the beast collapsing and the resultant tidal wave wiping out legions of invading daemon hordes as Zevi and his few remaining followers, converted after him by a steadfast Sarah and Nathan, who persuaded the wavering votaries that it was the only way to weather the impending rapture, float up through the various levels of atmosphere to the seraphic ululations which typically accompany heavenly admission—that climax, and not to even mention the entirety of Incredible Shrinking Man, not being delivered as they had been promised, provokes waves of resentful whispers among the increasingly dampened inmates, some of the bravest even venturing to invoke the inflammatory, unspeakable-of Refund, that hope-instilling deity of the indigent. But, in any case, the cold, entrepreneurial hearts of the neo-orphics prove unmoved, as they shield their elderly moneymaker with a makeshift umbrella of cocoa brown sweatsuits and escort him through the throng. Though, to be fair, they do leave behind one of their number to placate the disgruntled mob during its inclement exodus, the excessively muscular spokesperson explaining essentially how the prophecies of Gustachion, by their very nature transitory and subject to sudden whims of fancy and environmental vicissitudes, proved fittingly analogous to their predecessors, the cherished televised photoplays of yesteryear, the absorbing climaxes of which could be suddenly superseded by power outage or breaking news coverage, and that therefore, out of a sort of respect for the past if nothing else, the generous entertainment providers comprising the Reformed Temple of Orpheus Descendent chose to uphold a clear and simple policy regarding refunds and all other forms of customer dissatisfaction: Shit happens. Do something about it.