Breakout: Voices from the Inside 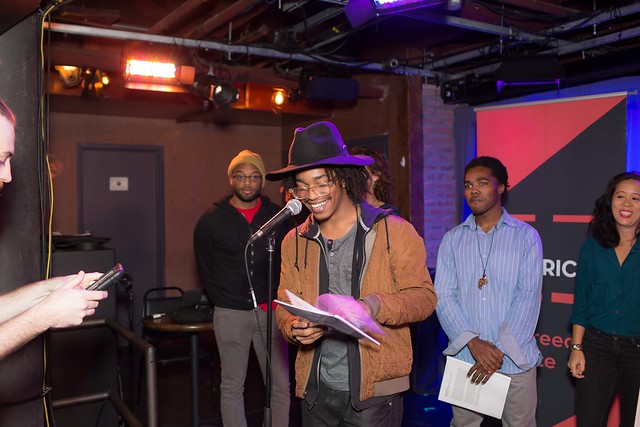 Join PEN America for “Breakout: Voices from the Inside,” an annual event that celebrates and recognizes excellence in prison writing.

We stage this beloved and transformative event to honor the best writing submitted to the PEN Prison Writing Contest, recognizing creative expression as a form of liberation. The award-winning works from this contest will be read by a cast of authors who join us in spotlighting the incredible work that is produced by incarcerated men and women nationwide.

The Prison Writing Contest is coordinated by the PEN Prison Writing Program, which reaches 20,000 inmates each year with a manual on creative and expository writing and facilitates over 150 one-on-one writing mentorships between PEN America Members and incarcerated writers.

We will be joined at this event by Books Through Bars, an organization that sends free books to incarcerated individuals nationwide. Books related to criminal justice will be sold by The New Press, a not-for-profit book publisher with a public interest mission.

Doors, and the cash bar for this event will open at 6:30pm. The show will start at 7pm.

Emily Bazelon is a staff writer at The New York Times Magazine and the Truman Capote Fellow for Creative Writing and Law at Yale Law School. She wrote the national bestseller Sticks and Stones: Defeating the Culture of Bullying and Rediscovering the Power of Character and Empathy and she is a cohost of the Slate Political Gabfest, a popular weekly podcast. She is currently working on a book about prosecutors and criminal justice reform.

Trace Howard DePass is the author of Self-portrait as the space between us (PANK Books 2018) and editor of Scholastic’s Best Teen Writing of 2017.  He served as the 2016 Teen Poet Laureate for the Borough of Queens. His work has been featured on BET Next Level, Billboard, Blavity, NPR’s The Takeaway, and also resides within literary homes – Entropy Magazine, Split This Rock!, The Other Side of Violet, Best Teen Writing of 2015, & the Voice of The East Coast Anthology.

Ashley C. Ford lives in Brooklyn by way of Indiana. She is (mostly) a writer, editor, and public speaker. She is currently writing a memoir, and hosting Brooklyn-based news & culture show, 112BK. Ford has written or guest-edited for The Guardian, ELLE, BuzzFeed, Slate, Teen Vogue, New York Magazine, Lenny Letter, and various other web and print publications. She also taught creative non-fiction writing at The New School and Catapult.Co. Ford previously worked as a development executive for Matter Studios, where she focused on web series and documentaries, and was also the host of the first season of Audible.Com’s literary interview series, Authorized. She has been named among Forbes Magazine‘s 2017 30 Under 30 in Media, and Brooklyn Magazine‘s 2016 Brooklyn 100.

Terrance Hayes is the author of Lighthead (Penguin 2010), winner of the 2010 National Book Award and finalist for the National Book Critics Circle Award. His other books are Wind In a Box (Penguin 2006), Hip Logic (Penguin 2002), and Muscular Music (Tia Chucha Press, 1999). His honors include a Whiting Writers Award, a National Endowment for the Arts Fellowship, a United States Artists Zell Fellowship, a Guggenheim Fellowship, and a MacArthur Fellowship.  How To Be Drawn (Penguin 2015), his most recent  collection of poems, was a finalist for the 2015 National Book Award, the 2016 National Book Critics Circle Award, and received the 2016 NAACP Image Award for Poetry. He is the current poetry editor at New York Times Magazine and has two forthcoming manuscripts: American Sonnets for My Past And Future Assassin (Penguin, 2018), and To Float In The Space Between: Drawings and Essays in Conversation with Etheridge Knight (Wave, 2018).

Tanwi Nandini Islam is the author of Bright Lines (Penguin 2015), a finalist for the Center for Fiction First Novel Prize, Edmund White Debut Fiction Award, the Brooklyn Eagles Literary Prize, and the inaugural selection of the First Lady of NYC’s Gracie Book Club. She is the founder of Hi Wildflower, a beauty & fragrance house based in Brooklyn, where she lives.

Alice Sola Kim lives in New York. Her fiction has appeared in McSweeney’s, Tin House, BuzzFeed Reader, Lenny, Best American Science Fiction & Fantasy 2017, and other publications. She is a MacDowell Colony fellow, a recipient of a grant from the Elizabeth George Foundation, and a winner of a 2016 Whiting Award.

Lisa Ko is the author of The Leavers, a novel that was a finalist for the 2017 National Book Award for Fiction and won the 2016 PEN/Bellwether Prize for Socially Engaged Fiction. Her writing has appeared in Best American Short Stories 2016, The New York Times, O. Magazine, and elsewhere. She has been awarded fellowships and residencies from the New York Foundation for the Arts, the Lower Manhattan Cultural Council, and the MacDowell Colony, among others. She lives in New York City.

Nkosi Nkululeko, a poet and musician, has received fellowships from places such as Callaloo, The Watering Hole and Poets House. He has performed for TEDxNewYork and the Aspen Ideas Festival, and was a finalist for the 2016 Winter Tangerine Awards for Poetry, Best of the Net anthology, and nominated for the Pushcart Prize. His work is currently published in The Collagist, Third Coast, Pank, Apogee, VINYL, and more. Nkosi lives in Harlem, New York.

Mychal Denzel Smith is the New York Times bestselling author of Invisible Man, Got the Whole World Watching and a 2017 NAACP Image Award Nominee. His work has appeared online and in print for publications such as the Washington Post, The Atlantic, New Republic, The Nation, Complex, GQ, Guernica, Literary Hub, Pitchfork, Buzzfeed, and many others. In 2014 and 2016, TheRoot.com named him one of the 100 Most Influential African-Americans in their annual The Root 100 list.

Vincent Toro is the author of STEREO.ISLAND.MOSAIC., which was awarded Ahsahta Press’s Sawtooth Poetry Prize and The Poetry Society of America’s Norma Farber First Book Award. He has an MFA in poetry from Rutgers and is contributing editor for Kweli Literary Journal. Vincent is recipient of a Poet’s House Emerging Poets Fellowship, a New York Foundation for the Arts Fellowship in Poetry, The Caribbean Writer’s Cecile De Jongh Poetry Prize, and the Metlife Nuestras Voces Playwriting Award. Vincent’s poems have been published in The Buenos Aires Review, Codex, Rattle, The Cortland Review, Vinyl, The Hawai’I Review, Washington Square Review, The Paterson Review, and Best American Experimental Writing 2015. Vincent teaches at Bronx Community College, is writing liaison at The Cooper Union’s Saturday Program, and is a poet in the schools for The Dreamyard Project and the Dodge Poetry Foundation.

As Digital Media Director for Futuro Media, Julio Ricardo Varela works with all of Futuro’s shows and is a key voice is shaping the company’s digital vision. He is also a frequent contributor to Latino USA, and editor of and co-host (with Maria Hinojosa) of In The Thick. Before joining Futuro, Julio was digital producer for Al Jazeera America’s “The Stream” and his work has been featured in many global outlets, including the Washington Post, the Guardian, ESPN, the New York Times, Quartz, Le Monde, WGBH, WNYC, Face the Nation, MSNBC, Fusion, Univision and Telemundo. In 2015, the National Association of Hispanic Journalists honored Julio with its inaugural DALE (pronounced like Pitbull would say it) Award, given to “given to an individual or company that steps up and goes above and beyond to ensure Latinos are fairly and accurately represented.” A native of Puerto Rico, Julio spent his childhood between San Juan and the Bronx. He was also a contributing reporter at The Boston Globe. Julio graduated cum laude from Harvard College. In 2011, Julio founded LatinoRebels.com, one of the top U.S. Latino digital media sites in the world.

NYC Books Through Bars is an all-volunteer group that sends free books to incarcerated individuals all throughout the nation. Since 1996, volunteers have been coming together to match donated books with the letters we receive from people in prison telling us what they want to read. To learn more on how to donate books, funds, or volunteer,  visit booksthroughbarsnyc.org.

Now celebrating its 25th anniversary, The New Press is a not-for-profit book publisher with a public-interest mission. The New Press publishes books that promote understanding and discussion of the issues that affect us all, providing the ideas and inspiration for the activists, teachers, policymakers, and everyday citizens who are working to refresh our democracy. In its twenty-five years The New Press has published more than 1,000 books, among them Strangers in Their Own Land by Arlie Hochschild, the book that many have turned to in order to understand Trump’s America, and The New Jim Crow by Michelle Alexander, the national bestseller that has changed the conversation about criminal justice. Please visit them at www.thenewpress.com or follow them on Facebook or Twitter @thenewpress.