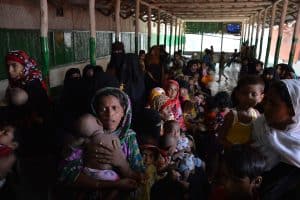 “At a time when the world needs to understand what is happening to the Rohingya, photojournalists like Min Zeyar Oo and Hkun Lat play an indispensable reporting role. Their place is in the field documenting the crisis, not behind bars. We call on the Bangladeshi authorities to release Min Zeyar Oo and Hkun Lat, and to let them return to their work.” -James Tager, Free Expression Programs Manager, PEN America

The following has republished with permission from PEN Myanmar.

YANGON—On September 7, 2017, police in Cox’s Bazar, Bangladesh, arrested two Myanmar photojournalists, Min Zeyar Oo and Hkun Lat. The pair were on assignment in Cox’s Bazar for the German magazine GEO to report on the refugees that had escaped the conflict in Rakhine State.

Bangladeshi authorities have accused Min Zeyar Oo and Hkun Lat of “false impersonation” and “providing false information” for working as journalists while holding tourist visas. They have also been accused of espionage.

As noted in the protocol to the Geneva Convention of August 12, 1940, and relating to the Protection of Victims of International Armed Conflicts (Protocol 1), Article 79—Measure of Protection for Journalists, journalists working in dangerous areas should be considered civilians and therefor treated as non-combatants.

PEN Myanmar calls for the urgent and unconditional release of Min Zeyar Oo and Hkun Lat, and calls on the Bangladeshi authorities to allow them to carry out their duties as reporters so that people around the world can better understand the consequences of the current conflict in Rakhine State. PEN Myanmar also requests that the Myanmar government urgently assist with their release.

Journalists Sentenced to 10 Years in Myanmar

Thailand to Try Journalists in Attempt to Stifle Reporting on Rohingya, says PEN

Despite Reform, Expression in Myanmar Still Not Free, According to New PEN Report