“Do you really want to know why the caged bird sings?”: On Marlon Peterson’s Abolitionist Memoir 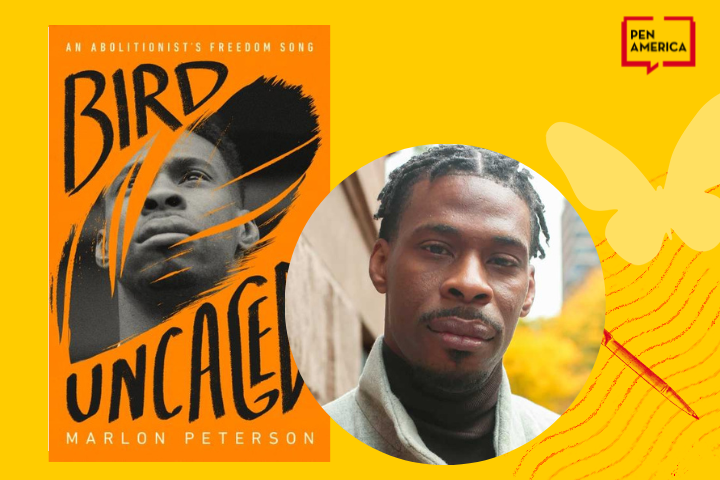 In order to “end all the prisons that bind us,” we must first understand all the ways in which we are caged. In his memoir, Bird Uncaged: An Abolitionist Memoir (Bold Type Books, 2021), Marlon Peterson’s understanding of abolition transcends the physical prison space as he frees himself from all the cages that hold him: toxic masculinity, guilt, trauma, incarceration, and fear. Grappling with the devastating impacts of interpersonal and systemic violence, Peterson’s first book is brimming with love and hope, as he invites his readers to witness the profound transformation of his relationships with selfhood, family, religion, women, and community. Written with breathtaking vulnerability, Bird Uncaged traces Peterson’s life from his childhood in Brooklyn, his 10 years of incarceration, and his journey to becoming a writer.

Growing up in New York City in the 1980s and 1990s, Peterson contends with the influences of religion and masculinity on his growing sense of self. Early in his childhood, he connects with his father, a devout Jehovah’s Witness, over their shared passion for reading and religion. However, as he gets older, Peterson starts to question his faith, as he attempts to form an identity for himself outside of his practice: “Losing my religion came at a high cost. I didn’t know how to exist in a world outside the confines of the Kingdom Hall.” Facing a growing disconnect between himself and the Jehovah’s Witness community, Peterson finds himself spending more time conforming to and performing hypermasculinity by cat-calling and objectifying women: “I admit that as much as I needed to be seen as fully human, I was denying the women in my life that same humanity.” Peterson’s reflections on this period of his life are sharp and introspective; his candid disclosure of his harmful thoughts and actions invites his readers to examine their own complicities.

Peterson’s memoir poignantly retells the story of his arrest, trial, and incarceration, centering his family in this narrative: “when I went to jail the other five people in my household were locked up with me.” Peterson’s scenes in prison are simultaneously heartbreaking and heartwarming, as he compels his readers to witness the violences and realities of physical cages. Struggling against the mental tolls of incarceration, Peterson finds purpose in mentoring people both inside and out of prison. Working with the Young Scholars Program on the outside, and the Transitional Services Center on the inside, Peterson broadens our ideas and notions of who a teacher and mentor can be:

“Except for Nadia and the Young Scholars Program, all my teachers were crooks, murderers, arsonists, heroin addicts, drug dealers, and recidivists. […] We were a community of healers, warriors, jesters, and teachers. We were people broken by experiences, surviving the best way we knew how. We were you. That’s the thing about prison that I wish more people understood. Incarceration doesn’t rehabilitate; people do.”

In addition to growing his community of teachers and students in prison, Peterson begins his journey as a writer. Writing in his journal, he realizes not only his own creative potential, but also the healing power of imagination: “Imagination was my hope…This is also how I survived prison. I imagined fun. I imagined love.”

Throughout the memoir, Peterson refines his understanding of abolition and justice, becoming an abolitionist “out of necessity.” Having conceptualized the realities and impacts of the prison system through the imagery of cages, Peterson spends the last portion of his memoir examining what it will take to break them all down: “disruptive innovation” and “the undoing of America.” Inseparable from his ideas surrounding abolition is his definition of justice: “what love looks like in public.” Applying his newfound abolitionist framework to his own life, Peterson acknowledges the work he still has left to do in order to feel truly free: “the prison that I have had the hardest time identifying and abolishing is the one that has convinced me that I do not deserve to be happy; that happiness is a fleeting moment, but never a movement.”

Emma Stammen talks with Marlon Peterson about what inspired him to write, and how his understanding of abolition transcends the physical prison space on PEN America’s Works of Justice podcast.

Emma Stammen is a postgraduate fellow with PEN America’s Prison and Justice Writing. She received her BA with honors from Scripps College, where she majored in Feminist, Gender and Sexuality Studies and English. In addition to her fellowship with PEN America, Emma is a research fellow at The Sentencing Project, and has previously worked for the Correctional Association of New York and The Seattle Clemency Project.