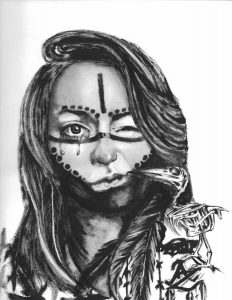 I only have a few minutes remaining on my prison phone account so my husband, Jackson, and I race through the logistics common to marriage: kids, school, taxes. Then Jackson, normally a man of few words, tells me about Sharon, a friend from our old life in Boston.

Our kids and her girls grew up together and they socialize every time my family returns to Boston to visit my parents. I hope Sharon gets the house.

The kids pass around the phone and we exchange I love yous before Jack takes it again. I can always tell when he does. I hear his breathing–not labored, but there in my heart. I tell him I love you, but he does not tell me the same. Not since I’ve been incarcerated has he said, I love you. Who can blame him?

For ten seconds that I thankfully don’t remember, I became horror. I, a law-constrained mother and assistant professor of Biology, am in Tutwiler Prison, Butthole, Alabama on Life Without Parole. We moved to Jackson’s home state for my exalted faculty position.

Then Jack says something new. “Remember the first powwow I took you to?”

It was the annual Cherokee Nation powwow, led by Sly Fox. Jack had whisked me from downtown Boston to the north suburb of Ipswich for the powwow, our first date. We’d been lab partners for the past three semesters at Boston College. Jack informed me that Sly Fox led powwows all over the U.S., including his home state of Alabama.

We stand at the rim of the dance circle on a clear, blue-sky day, the salty breeze blowing in from nearby Crane’s Beach. Suddenly, all of us observers are awash in smoke from the giant grill loaded down with buffalo meat. The dancers: men, women (“Spirit Warriors” as Sly Fox called them) and children, all feathered and decorated — the men with bell-bedecked thongs strapped to their legs, the women with shells– are stomping, moving, singing, and jangling their bells and shells, led by the chants of Sly Fox to the insistent beat of the drums.

The dance ends and Sly Fox raises his arms. The feathered children scamper off to play; the teenagers saunter off talking, joking, one checks his cell phone.

Sly Fox begins, “Weha aya, Weha aya. We invite new couples who have chosen to journey through life together until they join the Great Spirit and dance together in heaven.” Sly Fox laughs and adds, “C,mon men, don’t be shy.”

The prison phone beeps a final warning, “One minute left.”

Suddenly, I hear myself say, “I’ll be here until I die. I release you. You’re a man, still young. The girls are soon off to college. Junior’s in highschool. Find someone who’ll love our children, and love you: Sharon!”

We are silent for the precious seconds remaining, and then I hear Jack breathe, “Thank you.”

The phone goes dead. Time’s up.

Over the next few phone calls I talk to my girls and boy about school, their friends, their upcoming trip to Boston to visit my parents, their planned excursion to Crane’s Beach. During one phone call my oldest girl shouts, “Dad planned the trip so we can go to the powwow with Aunt Sharon and my two BFFs!” Sharon’s girls.

My jealousy rages and I wish I could recall my words of release, but I can’t. It’s the right thing to do– to let my forty-something husband find someone with whom to spend his life. Jack should not grow old alone: his blue eyes going white with cataracts without having ever seen again the wine-dark flower of a woman.

For the next month I have to call Jack and kids at my parents’ and during the calls Jack is chipper, happy. The 24 hour cacophony, violence, searing heat, and loneliness of prison life screws down tight on my spirit.

During one call, Jack tells me, “We’ve just come from the beach.” I close my eyes. I hear the crash of waves, smell the ocean, feel the ice-cold Atlantic wash against my legs, washing away the searing heat of prison. And then Jack adds, “I took the kids to the opening day of powwow. We ate buffalo burgers.”

In the background I hear my kids, and then I recognize Sharon’s voice cajoling one of her daughters.

Jack says, “We’re still here, still at the powwow. Let me hold out the phone so you can hear.”

The kids shout their greetings, I scream my I love yous. Maybe my kids can hear me.

Jack puts the phone to his ear, “Can you hear everything?”

“I mean clearly, can you hear Sly Fox and the drums?”

Sharon. The Couples Dance. I wonder why Jack is being so cruel. “Yes.”

Sly Fox announces, “New couples, who wish to journey together through life, until they join the Great Spirit and dance together in heaven, come into the circle. Sing and dance with me and my Spirit Warriors.”

My oldest shouts. Sharon shouts and whoops. Jack will take Sharon into the circle. Betrayal washes over me. But this is what I wanted.

Suddenly, Sharon’s whoops become distant, and are left behind, as the words of Sly Fox crescendo. I hear, “Don’t be shy. Come into the circle.” I hear the first beat of the drums.

Jack puts the phone to his ear, I can tell, I can hear his breathing.

Tentatively, I step into the swelling wave of the chant. Jack gets louder. So do I.

I begin to dance, as much as I can, tethered to the prison phone. I dance with Jack in the couples circle, with Sly Fox and his Spirit Warriors, awash in the smoke of buffalo meat, bells and shells jangling, all to the insistent beat of the drums. Sharon, her children, my children, a few of my fellow prisoners at the phones, bear witness to our dance.

I am dancing with Jack.

There are good reasons to deny book deals to the great majority of officials associated with the #Trump admin. But demanding a blanket ban and threatening publishers that don't comply is not the right approach. https://www.latimes.com/entertainment-arts/books/story/2021-01-15/book-world-signs-letter-to-block-trump-book-deals?fbclid=IwAR3Azaa6el2ftuq9kNCZ8_FqoKFYQc30hx7S8TTfYnrGHVxmPx58yj_214U

Don't forget to sign up for our FREE You Are A Writer workshop on 1/20 led by @ashberry813, @theSoniaG, @Eloisa_Amezcua & @SbwyBookreview founder Uli Beutter Cohen! Participants will learn how to build an audience for their work and literary community: https://bit.ly/385I8Nh.