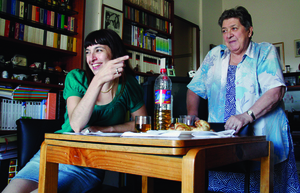 Paola Gianturco’s book Grandmother Power, a moving collection of essays and photographs from powerHouse Books, profiles grandmother activists from 15 countries on five continents around the world who are agitating for change and for the rights of their grandchildren. Below is an excerpt from the chapter entitled “Justice: Argentina.”

Argentine grandmothers began searching for their grandchildren as soon as they learned the youngsters had been stolen by the military, an event that set the agenda for the rest of their lives.

At the beginning, their investigations were greeted with silence. The public was too afraid to acknowledge that between 1976 and 1983 the junta “disappeared” 30,000 people, forcing them into secret detention camps where they were tortured for information, then murdered.

Explaining the government’s strategy to eliminate leftist dissent, General Iberico Saint-Jean promised,“First we will kill all the subversives, then we will kill their collaborators, then their sympathizers, then those who remain indifferent and finally, we will kill the weak.”

The “Disappeared,” as they are called, ranged from innocents to intellectuals to guerillas; many were blue-collar workers and students.

Adults were not the only ones who were abducted. Children who had not yet learned to talk were considered educable. They were stolen from the detention centers by military and police officers and raised to be “patriotic.”

The Tree of Subversion graphic was a teaching slide used in a counter-terrorism course for Argentina military officers during the dictatorship. From Grandmother Power by Paola Gianturco, published by powerHouse Books

Pregnant prisoners were tortured but kept alive long enough to give birth. An obstetrician or midwife would be kidnapped from the street, blindfolded, taken to the room where the prisoner was in labor, and ordered to deliver the baby alive. After the mothers were killed, their babies were appropriated, sold, or abandoned.

“Later, military personnel said they regretted not having killed the children; they didn’t anticipate the magnitude of response from the mothers and grandmothers. They thought we would stay in our houses and cry,” recalls grandmother Elsa Pavon de Aguilar.

The grandmothers began to search. They received almost no help. Police, military, judges, and church officials supported the dictatorship. Lawyers were disappeared for writing habeas corpus documents so the grandmothers could demand the children’s return. The state-controlled press reported no disappearances.

Each grandmother searched alone at first, unaware of the others. The women didn’t yet know that stealing children was part of the junta’s systematic plan to maintain power, eradicate political opposition, and induce fear. “I was never afraid; I had such a level of desperation that I didn’t register other feelings,” grandmother Mirta Sinista Acunya de Baravalle admits.

As they visited jails, orphanages, daycare centers, churches, courts, parliament, and ministries, the women began to recognize each other and talk.

The Abuelas pretended their meetings were card games and birthday parties. They spoke in code on the phone. They posed as maids, nannies, teachers, and renters just to get into houses where their grandchildren might be living. They posted pictures and ran ads featuring photos of the disappeared children in 24 countries. They traded intelligence with grandmothers in other parts of Latin America. They wrote the United Nations. They asked the Pope “to end this calvary that we are living.”

In 1978 the Madres and Abuelas of the Plaza de Mayo marched together during a religious pilgrimage to the city of Lujan. To identify themselves, they wore cloth diapers as headscarves. White kerchiefs became their signature.

The Plaza de Mayo is the backyard of the Casa Rosada (Pink House) where the President’s offices are: a perfect place for political demonstrations. The Abuelas joined the Madres, walking silently in circles at the Plaza to protest their grandchildren’s disappearances.

Mirta de Baravalle says, “At first, people approached us in the Plaza with notes. Over time, we had thousands of tips from different sources. We knew our children were someplace there in the bits of paper.”

The Abuelas began talking with foreign journalists and earned support from international organizations and governments.

When the grandmothers began finding missing youngsters, they engaged social workers, psychologists, and physicians to help their grandchildren who were whiplashed by the revelations that they were not who they thought they were, and that the people they knew as their parents might have murdered their real mothers and fathers.

The Falklands War diverted the attention of the military and depleted the dictatorship’s resources. Democracy returned to Argentina in 1983 and the grandmothers filed law suits immediately, even though they had no way to prove that they were related to their grandchildren and they had never even seen the babies who were born in captivity.

Determined to develop legal evidence, the grandmothers commissioned North American scientists to devise a procedure like paternity testing to prove kinship between grandmothers and grandchildren. Mary-Claire King, a California geneticist, developed essential tests whose results were statistically accurate at the 99.9% level.

When necessary, the Abuelas got court permission to exhume the mothers’ bodies so forensic anthropologists could confirm that the women had given birth while interned. Eric Stover, Director of the Human Rights Center at the University of California, Berkeley, believes these investigations were the first use of science to further human rights.

from Grandmother Power by Paola Gianturco, published by powerHouse Books

Thanks to the grandmother’s initiatives, a National Bank of Genetic Data for Relatives of Disappeared Children exists. National laws have been enacted to give adopted children the right to their records when they become adults. Children’s rights to identity and live with their families are part of the United Nation’s Convention on the Rights of the Child. A United Nations commission repatriates grandchildren taken to other countries. The U.N. added “appropriation of children” to its definition of genocidal behavior.

In February 2011, former dictators Jorge Videla and Reynaldo Bignone finally went on trial “for overseeing a systematic plan to steal babies born to political prisoners.” The grandmothers had initiated the case in 1985. The London Daily Mail reported, “The defendants dismissed the process as an act of revenge by the leftist ideologues they defeated decades ago,” and said Videla nodded off as the court clerk read the indictments.

As usual, the generals had underestimated the Abuelas who had 370 witnesses ready to testify that the junta leaders falsified paperwork and arranged illegal adoptions for people sympathetic to the military regime.

The long-delayed trial is only one of the grandmothers’ current activities. “At first we knocked on doors looking for little children,” the Abuelas’ President Estela de Carlotto remembers. “Now most are in their 30s so we use a different strategy: we seed doubt about identity so they will request blood tests.”

The Theater of Identity is crucial to that mission. Playwrights, producers, directors, choreographers, technicians, and actors volunteer their time and talents to present free plays about the Disappeared. Their performances end with the question, “And do you know who you are?” Thespians throughout Argentina, Spain, Switzerland, and Venezuela “act to remember; to find truth, and most important, to find grandchildren,” the theater’s founders explain.

A global network of old and young supports the grandmothers’ work. Student staffers at the Abuelas’ office use Facebook and Twitter to support the Abuelas’ searches. H.I.J.O.S., teen activists, say they work “for identity and justice against silence and oblivion.” Citizens throughout Argentina relay rumors. Abuela chapters in other countries tip the grandmothers off.

The Abuelas recently launched an international communications campaign. Estela de Carlotto says, “We want to tell people all over the world that if this could happen in Argentina, it could happen any place. Identity is a human right. Our message is ‘Never Again.’”

Grandmother Power is available in print and e-book from powerHouse Books. All author royalties will be donated to the Stephen Lewis Foundation’s Grandmothers to Grandmothers campaign, which provides grants to African grandmothers who are raising AIDS orphans. Paola Gianturco, a grandmother herself, has documented women’s lives in 55 countries. Her work has been exhibited at UNESCO’s Paris headquarters; United Nations’ New York headquarters; Chicago’s Field Museum; San Francisco’s International Museum of Women; and many other venues. powerHouse Books has published Gianturco’s Women Who Light the Dark (2007), ¡Viva Colores! A Salute to the Indomitable People of Guatemala (2006), Celebrating Women (2004), and In Her Hands, Craftswomen Changing the World (2004).

On this episode of #thePENpod, we speak with Uli Beutter Cohen, creator of @SbwyBookreview, about her new book, which collects over 170 interviews from the acclaimed social media movement that highlights books and the people who cherish them. https://bit.ly/3FTqNak

Would love to see you join us for this final reading from the @PENamerica Emerging Voices Fellows on October 27+28. The virtual readings will air 5-6 PM PST each night, and each reading will include personal intros from our mentors. @pen_ev @kaokaliayang https://pen.org/event/2021-emerging-voices-final-reading