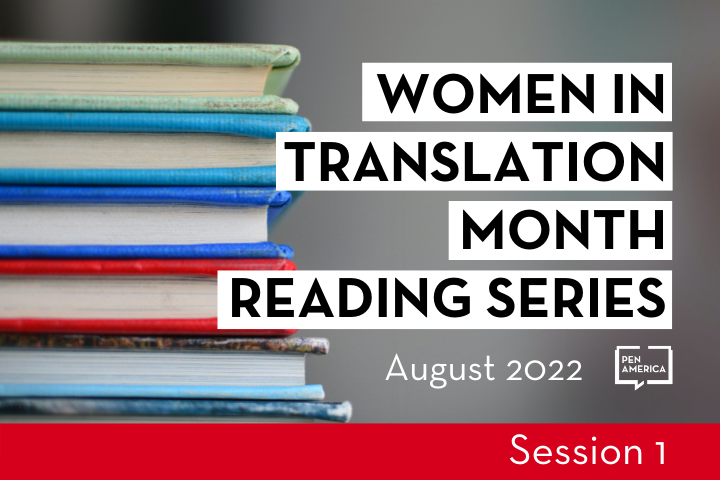 Hélène Cardona has authored four bilingual collections and six translations. She is the recipient of over twenty honors and awards, and her work has been translated into sixteen languages.

Soleil Davíd’s translation has appeared in Ulirát: The Best Contemporary Stories in Translation from the Philippines. She has received support from PEN America, VONA, and the Bread Loaf Translators’ Conference.

Yardenne Greenspan is a writer and Hebrew translator born in Tel Aviv. She holds an MFA from Columbia University and is a regular contributor to Ploughshares.

Lea Nagy, recipient of an NKA grant and winner of Best Young Hungarian Poet, has published two collections, with a third forthcoming from Éditions du Cygne in Paris.

Quyên Nguyễn-Hoàng is a writer-translator born in Hà Nội, Việt Nam. She studied at Stanford University. Nguyễn-Hoàng’s work has appeared in Poetry, The Margins, Jacket2, Columbia Journal and various other venues.

Carlo Paulo Pacolor is a non-binary author and director of stories and performance. Ang Kompedio ng Mga Imposibleng Bagay is their first collection of short stories.

Somaia Ramesh is a poet and active participant in Afghanistan’s cultural, social and political arena and was the head of the Civic Foundation for Modern Thinkers for ten years. She is the author of three collections of poems.

Sholeh Wolpé is the author or editor of more than a dozen books, several plays, and an oratorio. Her most recent book is Abacus of Loss: A Memoir in Verse.

Noa Yedlin is the bestselling author of the novels House Arrest, Stockholm, People Like Us and The Wrong Book and winner of the Sapir Prize and the Israeli Prime Minister’s Literature Award.

Thank you to these authors for standing up and speaking up. @LindaSuePark Ami Polonsky @ElloEllenOh to save young people's lives and fight for their #fREADom to have access to books that reflect their reality and provide hope. Thanks to @FLFreedomRead @diversebooks @PENamerica https://twitter.com/FLFreedomRead/status/1600529718855491586

This is a worry in Tx upcoming legislative session that a punitive state law will lead districts to overreact and censor themselves out of fear. (like this district in MO removing The Hate U Give). @penamerica @uabookbans https://www.emissourian.com/local_news/st-clair-district-pulls-book-from-library-shelves-as-schools-statewide-grapple-with-new-state/article_f624eaa4-7681-11ed-b2ee-b7df4d46e30a.html

Books are being banned at alarming rates across the country. Help PEN America uncover these bans and fight for the freedom to write and read.