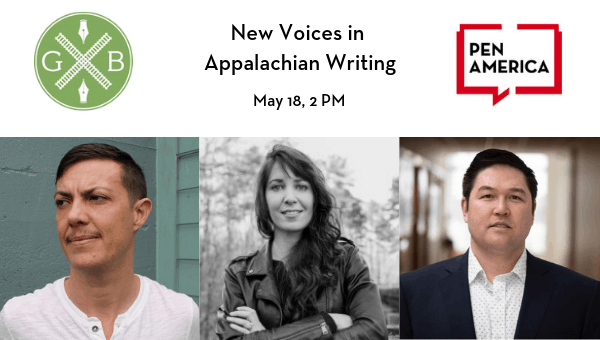 Contemporary Appalachian writing contains a multitude of voices: LGBTQ voices, those of mixed race, immigrant voices, and those from varying socio-economic levels. Carter Sickels (The Evening Hour), Mesha Maren (Sugar Run), and Michael Croley (Any Other Place) come together to talk about the changing faces of Appalachian literature.

Carter Sickels is the author of the novel The Evening Hour (Bloomsbury), a Finalist for the 2013 Oregon Book Award and the Lambda Literary Debut Fiction Award. He is the recipient of the 2013 Lambda Literary Emerging Writer Award. His essays and fiction have appeared in various literary journals and anthologies, including Guernica and BuzzFeed, and he is the editor of the anthology Untangling the Knot: Queer Voices on Marriage, Relationships, and Identity. He’s been awarded fellowships and scholarships to Bread Loaf Writers’ Conference, the Sewanee Writers’ Conference, and the MacDowell Colony. Carter has taught in the Low-Residency MFA programs at West Virginia Wesleyan College and Eastern Oregon University. He is Assistant Professor of Creative Writing at Eastern Kentucky University, where he teaches in the Bluegrass Writers’ Studio Low-Res MFA program.

Mesha Maren is the author of the novel Sugar Run (Algonquin Books). Her short stories and essays can be read in Tin House, Oxford American, Crazyhorse, Triquarterly, The Southern Review, Ecotone, Sou’wester, Hobart, Forty Stories: New Writing from Harper Perennial, and elsewhere. She is the recipient of the 2015 Thomas Wolfe Fiction Prize, a 2014 Elizabeth George Foundation grant, an Appalachian Writing Fellowship from Lincoln Memorial University, and fellowships from the MacDowell Colony and the Ucross Foundation. She is the 2018-2019 Kenan Visiting Writer at the University of North Carolina at Chapel Hill and also serves as a National Endowment of the Arts Writing Fellow at the Beckley Federal Correctional Institution.

Michael Croley was born in the foothills of the Appalachian Mountains. The recipient of an NEA Fellowship in Literature in 2016, his work has appeared in a number of publications. His debut collection of stories, Any Other Place, will appear in 2019. He teaches creative writing at Denison University.