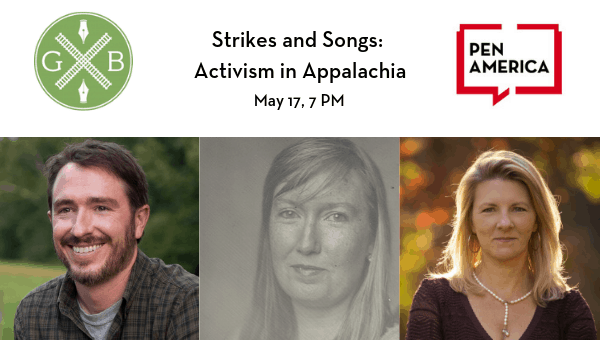 Wiley Cash’s The Last Ballad is a novel based on the true story of Ella May Wiggins, who led a textile strike in Bessemer City, NC, in 1929. Catherine Venable Brown is writing a book on the Battle of Blair Mountain, a notorious coal mine strike in 1921 West Virginia. Cash and Brown will talk about the history of social activism in Appalachia and the way that history informs the present. They are joined by musician-songwriter Laurelyn Dossett, who will sing activist songs of the period, one written by Ella May herself.

Wiley Cash is the New York Times bestselling author of the novels The Last Ballad, A Land More Kind than Home, and This Dark Road to Mercy. The founder of the Open Canon Book Club and co-founder of the Land More Kind Appalachian Artists Residency, he has been a fellow at the MacDowell Colony, Yaddo, and the Weymouth Center. He serves as the writer-in-residence at the University of North Carolina-Asheville and teaches in the Mountainview Low-Residency MFA. He lives in North Carolina with his wife and their two young daughters.

Catherine Venable Brown is a writer and producer based in Ansted, West Virginia. Her nonfiction has appeared in Best American Essays, Oxford American, VICE, Glamour, Fence, VQR, Columbia Journalism Review, and others. The BBC, NPR, and other networks have aired her radio pieces. She is the co-founder of several public history projects, including the West Virginia Mine Wars Museum. Her current projects include two works of narrative nonfiction set in Appalachia, to be published by Random House.

Composer/Songwriter Laurelyn Dossett lives and writes in the piedmont of North Carolina, and her songs tend to reflect the stories of the region, both traditional and contemporary. One of the most sought-after voices in creative collaborations, she co-founded Polecat Creek with singing partner Kari Sickenberger, and has partnered with Triad Stage’s Preston Lane on four plays featuring regional folklore and original music: Brother Wolf, Beautiful Star: An Appalachian Nativity, Bloody Blackbeard, and Providence Gap. Laurelyn is also a regular performer at regional music festivals such as Merlefest, a guest on the radio show Prairie Home Companion, and most recently, a writer and performer with the North Carolina Symphony.