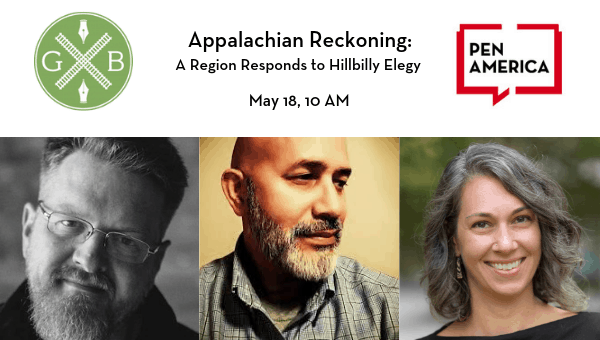 Contributors to the new book, Appalachian Reckoning: A Region Responds to Hillbilly Elegy discuss the misconceptions and assumptions about Appalachia which Hillbilly Elegy often glorifies and residents of the region struggle to overcome. With writers Robert Gipe (Trampoline) and Ricardo Nazario y Colón (Of Jibaros and Hillbillies) and editor Meredith McCarroll.

Robert Gipe won the 2015 Weatherford Award for outstanding Appalachian novel for his first novel Trampoline. His second novel is Weedeater (2018). Both novels were published by Ohio University Press. From 1997 to 2018, Gipe directed the Southeast Kentucky Community & Technical College Appalachian Program in Harlan. He is a producer of the Higher Ground community performance series; has directed the Southeast Kentucky Revitalization Project, which trains workers in fields related to creative placemaking; coordinated the Great Mountain Mural Mega Fest; co-produces the Hurricane Gap Community Theater Institute; and advises on It’s Good To Be Young in the Mountains, a youth-driven conference. Gipe formerly worked at Appalshop, an arts center in Whitesburg, Kentucky. Gipe resides in Harlan County, Kentucky. He grew up in Kingsport, Tennessee.

Ricardo Nazario y Colón was born in the South Bronx, NYC and raised in the Highlands of Puerto Rico. Presently he lives and works in the Appalachian region of Kentucky.  His first poem was written during bootcamp in the U.S. Marine Corps. His work has been published by Tawdry Bawdry, Louisville Review, Acentos Review, Aphros Review, Falling Star Magazine, and others. He is the author of the chapbook, The Recital, and the full collection, Of Jibaros and Hillbillies.

Meredith McCarroll was born and raised in Waynesville, North Carolina. She graduated from Appalachian State University, and later earned a Masters from Simmons College and a Ph.D. from the University of Tennessee. She lives now in Portland, Maine, and is Director of Writing and Rhetoric at Bowdoin College.