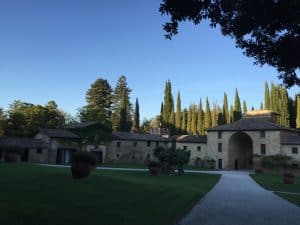 As part of a special collaboration between PEN America and the Civitella Ranieri Foundation in Umbria, Italy, every two years PEN America provides a unique, six-week residency to a working PEN America Member. A special panel of judges awarded the inaugural residency to poet Natalie Diaz. This year’s fellow is Sameer Pandya, author of The Blind Writer: Stories and a Novella, which was longlisted for the 2016 PEN Open Book Award.

Over the coming weeks, Pandya will post a series of dispatches from Civitella documenting his stay, his experiences, and the projects he is working on during his residency.

When I learned a year ago that I would be heading to Italy to spend six weeks at the Civitella Ranieri Foundation’s residency program and writing some blog posts about it, I could easily visualize what I would write: something about being Indian American and spending time in Italy. In my time away from working on a novel, maybe I would take a few cooking classes and learn rudimentary pasta making and what to do with the black truffles that get dug up from the Umbrian soil. And I would ride a bike around town, knowing exactly where to get the good cheese and the right bread.

It turns out, of course, that I am not the only one who has imagined this particular narrative. Aziz Ansari worked through it with a perfect balance of wit and self-consciousness in the second season of Master of None.

But Italy has plenty of narratives to give.

I flew to Rome and into the heat wave people have been calling Lucifer. I spent a warm evening walking around the city, gazing at the Colosseum, which turns out to be a tad more imposing and even older than the one I grew up going to in Oakland to watch the Athletics play summer baseball. I ate dinner in an outdoor café on a small side street. I think we tend to find comfort in new places when we can compare them to old places. Rome felt a bit like Bombay, where I lived until I was eight. Both cities are large, frayed, and intimate.

The next morning, I took a train north to Perugia, and then on to Umbertide, where on top of the highest hill in town sits a remarkable fifteenth-century castle that houses the residency. I had seen plenty of pictures of the castle and the surrounding grounds, but really nothing prepares you for its size, its impossibly thick stone walls, and, well, the fact that it is a castle.

The first week was mostly about seeing. The rolling yellow hills filled with corn, olive meadows, and sunflowers wilted from the late summer heat. The library, where I have taken to working in the mornings when it is cool, filled with books donated by the writers, composers, and artists who have spent time here over the years.  (Fun Home and Minima Moralia are the first two that I pulled out.)  The food, literally and directly from farm to table. A nearby red clay tennis court. But at the same time, while nestled in all this beauty and newness, there has been the news from Charlottesville, which I desperately want to see and not see at the same time. But not seeing is not a choice.

More than anything else, the long days of work and solitude, which are both powerful and frightening at the same time, have taken some getting used to. But slowly, routines are forming and work is progressing.  And I am so thankful to PEN America and the Civitella Ranieri Foundation for giving me this time to walk, to write, to read, and to explore new ways of seeing.