Democracy, Disinformation, and the 2020 Threat: Recapping a PEN America Symposium

On September 17, PEN America, the Global Digital Policy Incubator at Stanford University’s Cyber Policy Center, and the Chair of the U.S. Federal Election Commission, Ellen L. Weintraub, convened a half-day symposium in Washington, D.C., to examine the urgent challenge that digital disinformation poses to our democracy—and specifically to the 2020 elections—and to start identifying measures that ought to be taken.

As technological manipulation of information advances and disinformation becomes an increasingly common tactic in some campaign playbooks, the prospect that public trust in our democratic processes will further disintegrate looms large. PEN America has written about the threat such disinformation can play in electoral politics, notably in the 2019 report Truth on the Ballot: Fraudulent News, the Midterm Elections, and Prospects for 2020. PEN America has also analyzed the threat of fraudulent news specifically in its 2017 report Faking News: Fraudulent News and the Fight for Truth.

The Tuesday morning event, held at the FEC headquarters in Washington, was hosted by the commission’s chair, Ellen L. Weintraub. In welcoming remarks she outlined the threats ahead, calling digital disinformation “a fundamental assault on our democracy” and the “united character” of the country. Noting that Tuesday was Constitution Day, the chair said it’s appropriate to be holding the gathering on that day, as many in the room had sworn an oath to uphold the Constitution from enemies both foreign and domestic. 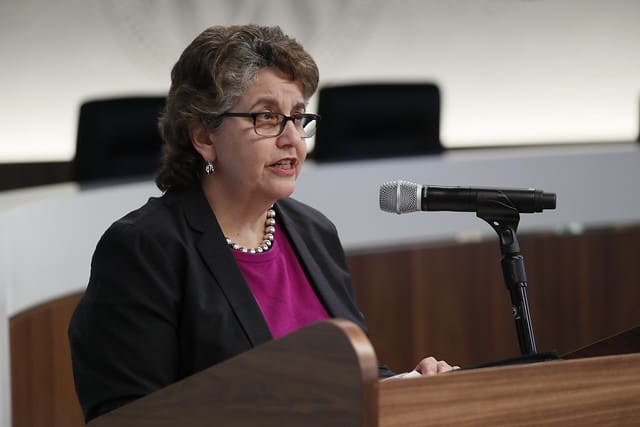 Lawmakers joined the discussion throughout the day, putting forward steps the federal government can take. In a keynote address, Sen. Mark Warner highlighted how the use and misuse of technology threatens American democracy, the economy, and the country’s national security.

“The wild, wild west days of social media are coming to an end,” Warner told the standing-room crowd, dinging social media companies for playing “rope-a-dope” with Congress over proposed federal regulations. Later in the day, Florida Rep. Stephanie Murphy said it’s the role of the federal government to warn about disinformation when it comes to elections. “Our government should err on the side of giving more information, not less,” she said. And she warned that U.S. foreign adversaries “are more likely to use malware than missiles” to chisel away at democratic institutions. 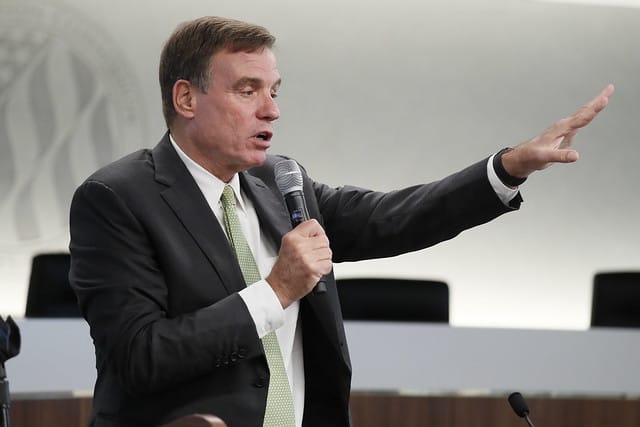 In two panel conversations, current and former government officials pored over the threat of disinformation and the role social companies, regulators, and even private citizens can play while also protecting free expression and free speech. PEN America CEO Suzanne Nossel said that on behalf of the organization’s 7,200 Members—including writers and journalists across the country—her organization was particularly attuned to ensuring disinformation doesn’t poison our elections. 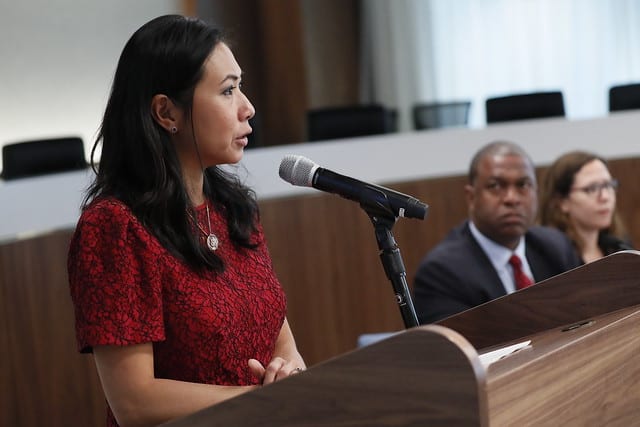 “At PEN America, we are free speech guardians and guardians of open discourse,” Nossel said. She emphasized that PEN America Members aren’t experts in elections or technology, but that writers are “invested in the quality of our discourse. And all of that is at stake.” And co-host Eileen Donahoe of Stanford University’s Cyber Policy Center warned that there was insufficient outrage about the threat, especially of disinformation emanating from foreign governments. 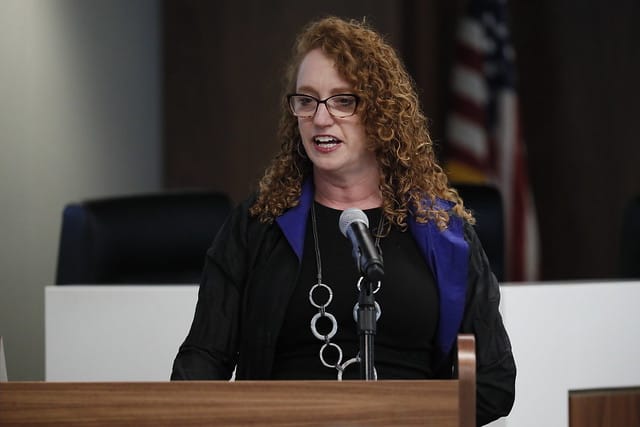 Joining the first panel, former Secretary of Homeland Security Secretary Michael Chertoff said that disinformation coursing through our democracy could lead to an erosion in public confidence in our elections. Such an outcome would be “a wonderful gift” to American adversaries. “What happens after the election if there’s a disinformation campaign?” Chertoff asked the audience. PEN America’s Nossel also commented on the potential for mayhem in 2020. “If we have a close election or a contested result, and there’s been a disinformation campaign,” she said, “I don’t know how we quite survive a second election that comes into serious question.” 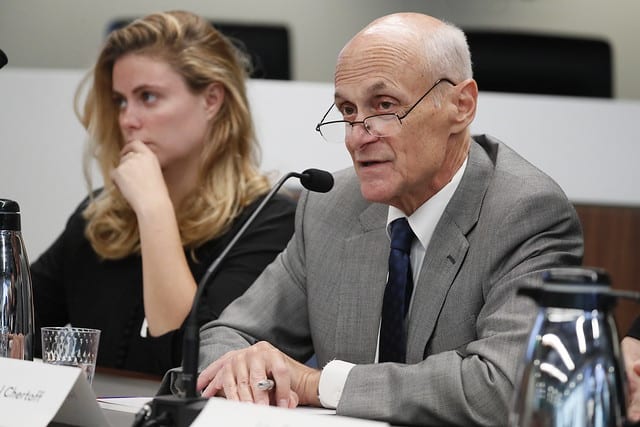 Representatives from big technology companies joined as both participants and audience members, offering up their proposals for solutions and the work that lays ahead. Google’s Clement Wolf highlighted concerns about manipulated media. “This is an arms race,” he said, “Our job is never going to be done.” Microsoft’s Ginny Badanes stressed the role tech companies can play in preventing deep fakes and other fraudulent material from taking hold.

Calling for more stringent regulations, Recode’s Kara Swisher said, “Washington needs to do its job and begin to regulate social media platforms.” She remarked that while much of the innovation on the web has originated in the United States, foreign adversaries have exploited that technology to attack U.S. political and democratic institutions. “The Russians lost the Cold War,” she said, “but they’re winning the information war with weapons Americans built.” 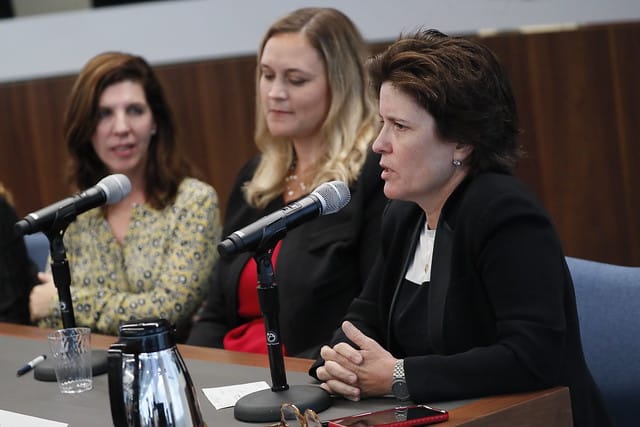 While panelists agreed there is no “silver bullet,” there was broad consensus on the need to act in the next 14 months to protect free expression but also ensure voters are equipped with the tools they need to differentiate between what’s real and what’s fake; to train journalists and other stakeholders in how to prevent misinformation from spreading; and how policymakers might consider new ways to work with social media companies, currently one of the largest elements of the U.S. economy without a primary regulator.

See more photos from the event 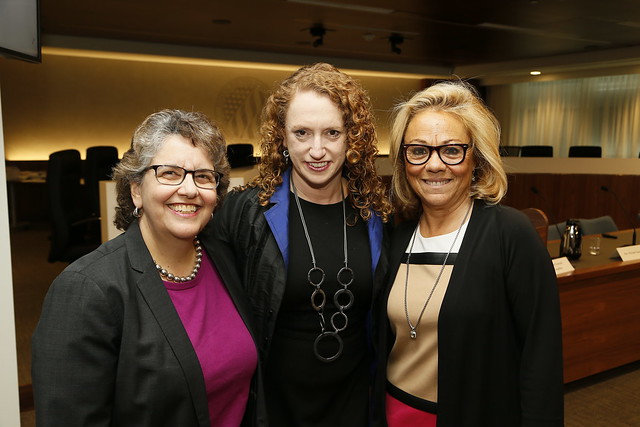