Suzanne Nossel currently serves as the Chief Executive Officer of PEN America, the leading human rights and free expression organization, and she is author of Dare to Speak: Defending Free Speech for All. Since joining in 2013, she has doubled the organization’s staff, budget, and membership, spearheaded the unification with PEN Center USA in Los Angeles and the establishment of a Washington, D.C. office, and overseen groundbreaking work on free expression in Hong Kong and China, Myanmar, Eurasia, and the United States. She is a leading voice on free expression issues in the United States and globally, writing and being interviewed frequently for national and international media outlets. Her prior career spanned government service and leadership roles in the corporate and nonprofit sectors. She has served as the Chief Operating Officer of Human Rights Watch and as Executive Director of Amnesty International USA. During the first term of the Obama Administration, Nossel served as Deputy Assistant Secretary of State for International Organizations, where she led U.S. engagement in the United Nations and multilateral institutions, on human rights and humanitarian issues. During the Clinton Administration, Nossel was Deputy to the U.S. Ambassador for UN Management and Reform at the U.S. Mission to the United Nations, where she was the lead negotiator in settling U.S. arrears to the world body. During her corporate career, Nossel served as Vice President of U.S. Business Development for Bertelsmann and as Vice President for Strategy and Operations for the Wall Street Journal. Nossel coined the term “Smart Power,” which was the title of a 2004 article she published in Foreign Affairs Magazine and later became the theme of Secretary of State Hillary Clinton’s tenure in office. Nossel is a featured columnist for Foreign Policy magazine and has published op-eds in The New York Times, Washington Post, LA Times, and dozens of other outlets, as well as scholarly articles in Foreign Affairs, Dissent, Democracy, and other journals. Nossel serves on the Board of Directors of the Tides Foundation. She is a former senior fellow at the Century Foundation, the Center for American Progress, and the Council on Foreign Relations. Nossel is a magna cum laude graduate of both Harvard College and Harvard Law School. 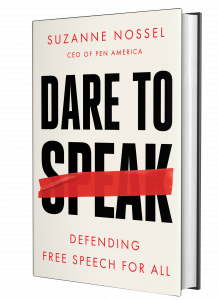 A vital, necessary playbook for navigating and defending free speech today by the CEO of PEN America, Dare To Speak provides a pathway for promoting free expression while also cultivating a more inclusive public culture.

“Banning Trump from Facebook may feel good. Here’s why it might be wrong”
Los Angeles Times, January 27, 2021

“How to Stop the Export of Authoritarianism”
Foreign Policy, October 5, 2020

“What Is the State of Free Speech Today? ‘It’s Under Profound Threat,’ Says the Head of PEN America”
Time, September 2, 2020

“‘Cancel culture’ censorship can be most dangerous for those who promote social justice”
NBC News THINK, August 4, 2020

“The American Approach to Free Speech is Flawed — but It’s the Best Option We Have”
Slate, July 28, 2020

“Has Free Speech Become an Even More Partisan Issue Under the Trump Administration?”
LitHub, July 15, 2020

“Those who exercise free speech should also defend it — even when it’s offensive”
Los Angeles Times, June 19, 2020

“We need smart solutions to mitigate the coronavirus’s impact. Here are 37.”
The Washington Post, May 14, 2020

“Don’t Let Leaders Use the Coronavirus as an Excuse to Violate Civil Liberties”
Foreign Policy, April 13, 2020

“As We Confront a Pandemic, U.S. State and Federal Government Must Support Local News”
Slate, March 27, 2020

“Trump and May Are Discrediting Democracy”
Foreign Policy, January 24, 2019

“Enforced Silence Is Just As Dangerous As Any Offensive Rhetoric”
The Washington Post, November 16, 2018

“Google Is Handing the Future of the Internet to China”
Foreign Policy, September 10, 2018

“The Job of Human Rights Chief Isn’t What You Think”
Foreign Policy, August 9, 2018

“What the Trump Administration Gets Very Wrong About Free Speech”
CNN, August 7, 2018

“Sometimes More Speech Isn’t the Solution to Offensive Speech”
The Washington Post, May 29, 2018

“You Can Only Protect Campus Speech if You Acknowledge Racism”
The Washington Post, May 25, 2018

“We Cannot Continue to Treat All Offensive Speech Acts – Intentional or Not – As Equally Blameworthy”
Pioneer Press, March 11, 2018

“Serving Under Trump Is Not a Crime”
Foreign Policy, February 7, 2018

“Not all Campus Speakers are Created Equal (Especially When They’re From the German Far Right)”
The Washington Post, October 31, 2017

“How We Communicate is Changing. So Should the Way We Think About Free Speech.”
The Washington Post, August 11, 2017

“No, Hateful Speech is Not the Same Thing as Violence.”
The Washington Post, June 22, 2017

“Can Freedom of the Press Survive Trump’s Onslaught?”
Foreign Policy, May 3, 2017

“Donald Trump Acts Like an Authoritarian Thug Toward the Press”
The Guardian, January 12, 2017

“Pushing Back Against the Tyrants”
Democracy, Summer 2016

“Who Will Speak for China’s Dissidents”
Los Angeles Times, September 20, 2015

“The Fight Over Jemele Hills Tweets Won’t Go Away, It’s About Truth and Race in The Trump Era”
The Washington Post, September 19, 2015

Disinformation vs. Democracy: Soros and the Fight for Open Societies | PEN America and the Brennan Center for Justice
March 22, 2021

Evening with an Author: Suzanne Nossel in conversation with Michelle Kuo | American Library in Paris
February 2, 2021

The First Amendment Salon “Defending Free Speech for All” | Foundation for Individual Rights in Education
October 29, 2020

Saving Our Democracy Town Hall | The AFT and the Albert Shanker Institute
October 13, 2020

Why we should all agree to disagree | Good Morning America
August 20, 2020

Dare to Speak: Defending Free Speech for All | The German Marshall Fund of the United States
August 20, 2020

Defending Your Right to Speak | Unprecedented with Richard Hine
August 6, 2020

Hate and the Vilification of the Media | Bard Center for the Study of Hate
July 23, 2020

‘Dare to Speak’ with PEN America’s Suzanne Nossel | So to Speak: The Free Speech Podcast
July 21, 2020

The Future of Information and the Impact on Democracy | 22nd Forum 2000 Conference
October 8, 2018

Free to State: The First Amendment and the Law | Washington Post Live
June 19, 2018

TODAY: Don't miss our Instagram Live conversation at 1:30PM ET to hear PEN America's @AttorneyNora and civil rights attorney @twrobertslaw on the increased criminalization of #protest, and how it affects BIPOC communities: http://bit.ly/3sLlovh.

Join us for the 2021 PEN America Literary Awards Ceremony at 7pm ET/4pm PT!