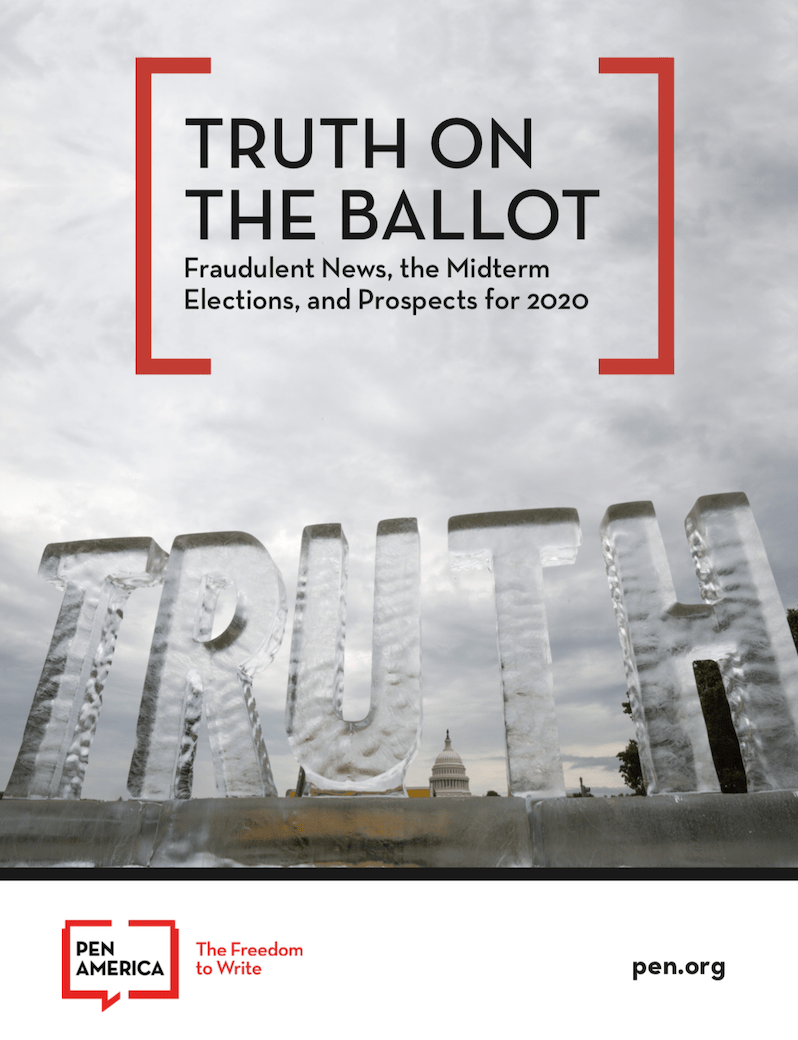 With fraudulent news and online disinformation distorting public discourse, eroding faith in journalism, and skewing voting decisions, Truth on the Ballot offers a stark warning about the normalization of fraudulent news and disinformation as campaign tactics, sounding an alarm that such unsavory methods are becoming part of the toolbox of hotly contested modern campaigns. Micro-targeting capabilities have weaponized disinformation, so that what might once have passed muster as simply a hard-edged campaign message in the public arena can now move with stealthy, laser-like efficiency to reach sub-segments of voters while remaining invisible to the wider public or opposing campaigns.

Truth on the Ballot builds on PEN America’s October 2017 report, Faking News: Fraudulent News and the Fight for Truth, which examined how fraudulent news is eroding truth-based civic discourse and constitutes a threat to free expression. At the time, the majority of public concern over fraudulent news fixated on foreign actors, including Russian disinformation agents and Macedonian clickbait farms. While foreign-originated disinformation remains a serious concern, Truth on the Ballot warns that domestic actors are increasingly experimenting with fraudulent news and information as a bare-knuckled political tactic.

Truth on the Ballot underscores the need for increased transparency regarding the funding of political ads, analyzing steps that technology companies have taken to address the problem and judging them often important, but insufficient. Additionally, the report reviews some of the most significant examples of fraudulent news during the 2018 election cycle and discusses how such disinformation shapes public discourse.

In addition to recommendations for technology companies, legislators, and political groups, Truth on the Ballot contains the first-of-its-kind Model Pledge Against Fraudulent News, a call to action for candidates and political parties to denounce fraudulent news and disinformation, and forswear its use. The Pledge also serves as a tool to empower citizens to take action and hold their elected officials and aspirants for public office accountable.

As public servants, figures placed in a position of authority in American politics, and aspirants to positions of public trust, we recognize our solemn duty to the American people to promote and uphold the highest standards of public service in our party’s candidates. This duty includes a respect for the truth. The American people deserve leaders who are committed to the value of truth in our public discourse, regardless of political affiliation or ideology.

Fraudulent news—demonstrably false information that is being presented as fact in an effort to deceive the public—is harmful to our democracy. We denounce fraudulent news as contrary to the values of our republic and disrespectful to our citizens, who rely on factual information to make reasoned decisions. We recognize that fraudulent news is illegitimate and abhorrent, and must never become an acceptable political tactic.

Key Conclusions from the Report