Breathe into the Ground

Mark Altenhofen was awarded first place in Fiction in the 2020 Prison Writing Contest.

BREATHE INTO THE GROUND 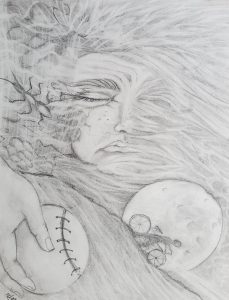 Breathe into the ground. If you breathe into the ground they won’t hear you, and the tears in your eyes won’t shine in the moonlight. Don’t move. Concentrate on the terrified calliope beat of your heart and let the bugs investigate you. You can swat and scratch later, curse their tiny legs and antennae until you’re breathless, but for now don’t move. You’ve invaded their home to make yourself hidden, and the least you can do is allow them to get to know this large intruder. Keep your face pressed to the earth, take in the green smell of the weeds that screen you. Think of that smell, as your mom’s friend Roger did in Vietnam, and not that Thomas will hurt you–bad—if he finds you. He wouldn’t care you’re only eleven. He would turn his fear and rage upon you if he discovered you.

It’d been Craig’s idea to come out here, not yours, but Thomas wouldn’t care about that either. Thomas is almost eight years older than you, the rich kid that drove the nice car, the boy with the mineral blue eyes of a dead sunfish. He’d strangled that cat to death in front of you; you’d watched it thrash and fight in his hand, its claws tearing ribbons from his arm, but he didn’t care. His eyes had stayed locked on yours, and then he laughed when you ran away. You and Craig—who would pick up the bottle this night and never put it down again—had seen them both and knew their secret. Would Thomas believe you if you promised to never tell anyone? No, he wouldn’t, because Thomas had never liked you. He’d always found reasons to throw rocks and firecrackers at you, to shoot at you with his pellet gun, and when you told your older sister he showed you the whisper sharp pocket knife he carried and said, “Go ahead Sparky, tell Mommy. Then I’ll cut your fucking balls off.”

Craig had been like Thomas’s pet all that summer, though. Anytime he wasn’t home you knew you’d see his bike in the back of Thomas’s house. Craig swore he was there to see Cory, Thomas’s little brother, but why did you always see Craig in Thomas’s car then? Craig didn’t tell you, and when you asked him about it, it sparked one of the rare fights between the two of you that actually drew blood. After that, the two of you drifted apart.

Then, with only a few weeks left of vacation, Craig asked you to camp out. It’d been like that insane, dry summer had never happened, and the two of you were partners in crime once more; literally, because Craig produced a carton of eggs and said, “Let’s egg Cory’s house.”

Cory had never been a friend of yours, and even though you knew he suffered at the hands of Thomas as much, or more, than you did, you felt that it was only right. He had a new bike every year or so, and you were lucky to own a second hand monstrosity that was literally held together by bailing wire. So you followed Craig, backpack slung on his back, down night shrouded alleys, through moon bathed sleeping yards, and north toward the far end of town where Thomas and Cory lived with their parents. Craig didn’t even slow when he saw Thomas’s black Monte Carlo missing from the driveway. Instead he whispered, “C’mon, I know where to go.” He led you farther north, past the softball diamond on the edge of town, over the Soo-Line spur that had long ago been shunned by the Beast, and down a field road flanked by tall corn on one side and a belt of woods on the other.

Out of breath, sweaty, and irritated you called for Craig to stop. He waved a hand to silence you and crouched in the center of the wheel ruts, the grass there just past his Reeboks. He crawled forward on all fours to where the track curved to the right past the corn, and froze like a frightened stag.

If you would’ve left then, as every instinct screamed at you to do, you wouldn’t have found yourself pressing your lips to long dead leaves, their tannic fragrance caressing the back of your throat, praying to a god you left in the church where you buried your father when you were nine, but even at eleven friendship was special to you. So you crouched and scuttled forward to join Craig, your rapid breath synced to his—panting like a pair of sled dogs born from the same litter-by the nights you’ve shared hidden from the cops and angry adults.

The black Monte Carlo was there, shielded from the dirt road proper. Craig pulled a hammer from the backpack, and before you comprehended what exactly he wanted to do with it he covered the twenty feet to the car. Craig was tall, strong, and athletic for twelve. The passenger side window didn’t stand a chance against his swing, nor did the headlights. It was clear, as Craig screamed, he wanted to do more, but the interior light flared and he bolted into the standing corn.

The car doors opened, you wanted to turn and run as well, but you were frozen in place by the shock of seeing Thomas and another boy spill shirtless from the car. You vaguely recognized the second boy as being in high school and think his name was Danny, but high schoolers are minor gods to you so you weren’t sure. Thomas’s brown hair, always perfectly coifed, is in disarray as he stands and curses. He pulls that familiar knife from his pocket, exposing that wicked blade with the flick of a wrist.

Although only eleven, you are far from naïve. Most of your friends are older than you, you’ve watched enough movies, and heard enough talk to have a good idea of what the two were doing in the car. Such things were looked down upon by every adult you knew, and demonized by friends and foe alike; including, ironically, Thomas himself whose favorite insults were “little faggot” and “fairy princess.” It didn’t take much for you to come to the understanding that if Thomas saw you, you would be in trouble.

The woods were only feet away, and you took refuge there. You didn’t lift your face from the ground, even as heavy footsteps passed within a foot of your face and Thomas ranted, swore, and threatened the night as Danny sobbed and cried out that he was scared of his dad and what his dad would do to him if he found out. Thomas roared at him to shut the fuck up, and Danny quieted. There was a conversation you couldn’t understand, and then the roar of the engine as the Monte Carlo spit dirt and gravel and roared away.

You were too scared to take a chance that they wouldn’t come back and look for you, so as soon as the engine faded you were on your feet and running. Through the cornfield, down the streets beneath the buttermilk lights-heedless of who witnessed your flight—you sprinted towards Craig’s backyard and the illusion of safety. You found him in the tent in the midst of combining the remnants of a pint of Southern Comfort and half of a two liter of soda. He’d been crying, you saw, but when your eyes met his you both burst into laughter. The tension that haunted you from the moment your lips touched the earth, and kissed those green blades of grass, has slipped from your shoulders. The terror you felt left you shaky, thirsty, and full of joy to be alive. The two of you share a drink and laugh some more, making no direct mention of what you saw, but only talking about the looks on their faces and how good it felt to get a little bit of revenge for the torment Thomas has brought to bear.

It won’t be until many years later, as you play hide-and-seek with your own kids, who’ve never had to breathe into the ground as someone stalked them in the moonlight with a knife, that you finally realize what it all meant. You hadn’t thought about that night in so many years, hadn’t put two and two together to understand how Craig would’ve known about that out of the way spot, or why he’d guessed Thomas would be there. Thomas had taken Craig there, probably many times before, and done things to him that you could only imagine now in your nightmares.

This time… this time you breathed into the ground so your children wouldn’t hear your startled sobs that escaped from your chest as you thought about your friend, because you finally understood so much more about him; why he’d drunk himself into oblivion for all these years, why he’d used every substance he could smoke, snort, inhale, or shoot to escape reality. It was his way of breathing into the ground…