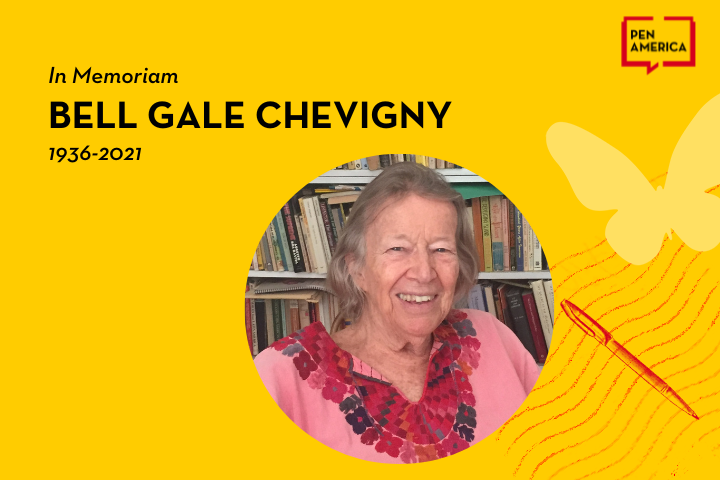 Professor and activist Bell Gale Chevigny (1936-2021) remained a central figure and mentor for PEN America’s Prison and Justice Writing Program since its founding in the early 1970s. Throughout her life, Bell taught in prisons, advocated for educational opportunities for incarcerated communities, and promoted the work of writers in prison throughout the country. Doing Time: 25 Years of Prison Writing (Arcade Publishing), her edited volume published in 1999 and reprinted in 2011, represents just a fraction of what she inspired in her students and her tireless volunteer work as part of PEN America’s Prison Writing Committee.

During December 2022’s Break Out, an annual celebration honoring winners of the PEN Prison Writing Awards, the Prison and Justice Writing staff paid tribute to Chevigny with a video celebrating her life and her service to incarcerated writers. The inspiring memorial essay below was written by co-committee member Susan Rosenburg and read in Chevigny’s honor as well. The essay has been reprinted from Variations on an Undisclosed Location, the 2022 Prison Writing Awards anthology.

The visiting room for death row prisoners in Huntsville, Texas, is hardly filled with laughter and creative energy. The almost empty phone lines for San Quentin’s “row” prisoners are devoid of lively dialogue about poetic forms. But when Bell Gale Chevigny showed up, the energy changed, conversation ensued, creativity pulsed.

Not many people in any sphere of life are willing to visit death row. Bell made the difficult cross-country trips often, advocating for the lives of people serving time, encouraging the writers among them, and fighting fiercely to have their works published, their voices heard. In her groundbreaking publication, Doing Time: 25 Years of Prison Writing, published in 1999 and republished in 2011, she writes about those on death row:

“Though from a certain vantage we all sit on death row, some of us know this better than others. The condemned struggle for physical, mental, emotional, and moral survival—and sometimes growth—like other convicts. But, like saints and existential philosophers, they also face the rigorous spiritual test of making annihilation their familiar while remaining human.”

Bell was clear-eyed about the terrible circumstances that lead people to death row, and she was deeply against the death penalty. She also understood and saw the creative explosion coming from behind the walls as a means of growth, change, and ultimately, redemption.

To promote the writing and work of those buried alive on death row, relegated to years of solitary confinement, denied parole, and living in the hell of U.S. prisons, Bell became a founding member of PEN America’s Prison Writing Program. At PEN, she helped create the annual Prison Writing Contest, the contest that produces this anthology, and chaired the committee tasked with reading and judging thousands of contest submissions each year. The committee meetings and the contest judging were raucous affairs. The discussions often began with everyone’s biases and subjective tastes coming to the fore. Yet Bell found ways to always bring us back to the quality of the work and the content. At the end of every decision or recommendation, Bell would raise her hand and say, “I have one more thing.” Sometimes she’d ask, “This writer is going for parole, can everyone here write a letter in support of them?” Other times she’d urge, “Here is a petition about the banning of literature or a particular book. Can everyone sign it?” At other times, she’d command, “This writer is in the hole because their work was published. We need to write letters to the warden about it!”

Bell’s advocacy and compassion, her understanding of how the punishment system works to destroy creative spirits, was unceasing. Over the years, Bell worked tirelessly to promote the writing of prisoners as writing worth reading, engaging, and studying by everyone—not just those behind the walls.

Bell Gale Chevigny taught literature inside prisons, and she built networks with others who were doing extraordinary things in relationship to prisoners and their individual lives long before the concept of mass incarceration became a topic of national discourse. Bell connected with people like Buzz Alexander, who founded the Prison Creative Arts Program (PCAP) at the University of Michigan, Hettie Jones, who headed PEN’s Prison and Justice Writing program and taught writing for years at Bedford Hills women’s prison, as well as Gara LaMarche, who as a human rights advocate promoted and supported both the Prison Writing and Freedom to Write campaigns.

Bell never forgot that statistics can serve as a cover-up to the humanity of each and every person imprisoned by this country. She never accepted the criminalization and dehumanization of people inside. Bell always tried to balance the ideas of the individual writer who found their creativity and artistic self while in prison and the need for social movements that actually can have power and bring about change. The tension between artist and advocate was one that Bell embodied.

In 2009, Bell and I, along with other artists, activists, and scholars, participated in the Blue Mountain Center’s first focus residency on prisons. At that time Bell was working on editing Journal of Prisoners on Prisons (JPP) V19 #1. The issue of the JPP featured nonfiction pieces that addressed issues of punishment and creative resistance and were written by winners of the PEN America Prison Writing Contest. Bell always looked for publication platforms to amplify incarcerated people’s work. Throughout the two weeks that we all worked and collaborated at Blue Mountain, Bell consistently highlighted our participation. Bell believed that the lived experience of imprisonment needed to be heard loudly and clearly. At the time, I was writing a memoir about my incarceration. Bell and I spent hours looking over the final drafts of my manuscript. Bell pressed me over and over again: she wanted deeper truth and examination of the why of my life decisions. What a treasure to have Bell come full circle with me, first when I was a prison writer where she reached out to encourage me and then advocate for my release, to then pushing me and other formerly incarcerated people to join the PEN Prison Writing Committee, and then to be moved again to dig deeper, as she would say.

Writer, painter, professor, organizer, advocate, anti-racist, anti-war activist, freedom rider, beat, Bell was inspired by and contributed to justice in America and around the world. She gave the entirety of her life to this robust, challenging and, often, thankless work. Bell died this past year after a hard and long illness. What she left behind is a beautiful legacy filled with critical thinking and grace. Bell Gale Chevigny sits with the great luminaries of PEN America’s past. Those like Susan Sontag, Norman Mailer, Arthur Miller, Grace Paley, and so many others, who consistently elevated the writings of the dispossessed. Bell is one of the elders whose shoulders people such as Nicole Fleetwood and Dwayne Betts and Caits Meissner stand. It was Bell who laid a foundation for how we build an alternative culture and set of systems to abolish prisons.

PEN America’s Prison and Justice Writing honored Bell Gale Chevigny and her legacy at Break Out 2022: Celebrating the PEN America Prison Writing Awards on December 2, 2022 at the Brooklyn Public Library with the following memorial video.

Susan Rosenberg is a human rights and prisoners rights advocate, adjunct lecturer, award-winning writer, speaker and a former prisoner. Her memoir, An American Radical: A Political Prisoner in My Own Country (Citadel, 2011), details her 16+ years in federal prison and conclusions about her prison experience. She was released from prison in 2001 through executive clemency by then President Bill Clinton. Susan has worked in nonprofit communications on human rights and in defense of prisoners and the abolition of prisons. A member of the Family and Friends of Dr. Mutulu Shakur, and Susan is an adjunct lecturer at Hunter College, in Women and Gender studies. She is in the board of directors of Thousand Currents, an international development organization, and on the Board of Ladies of Hope Ministries, a women and girls re-entry organization. Susan serves on the Prison Writing Committee at PEN America.