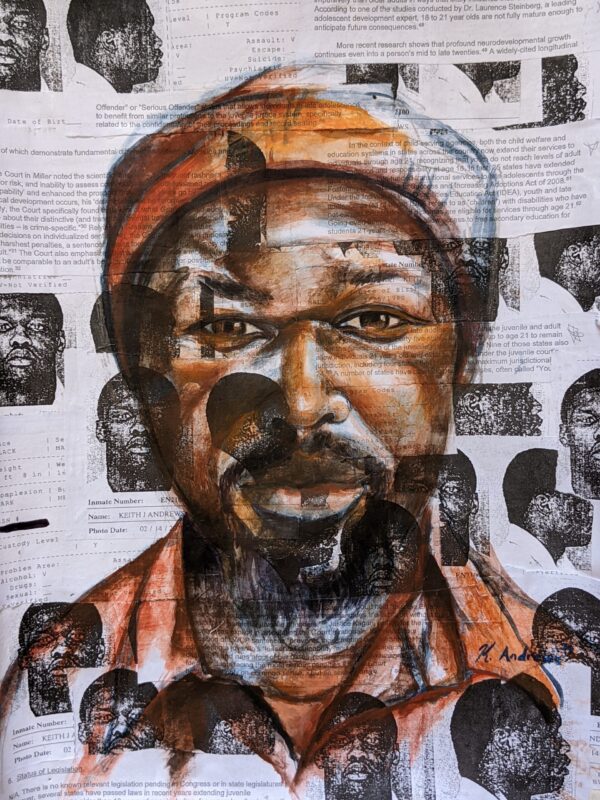 A multimedia exploration of selfhood—and the journey to define it in the most confining and draining of environments—is the throughline of Faces of Resilience, on view at the Barnes Foundation from July 8 through August 22, 2022. Presented in partnership with Mural Arts Philadelphia, the exhibit features work created by members of the organization’s Guild restorative justice program—a paid apprenticeship for formerly incarcerated adults and young adults on probation—and by artists currently incarcerated at the State Correctional Institution: Phoenix (SCI: Phoenix), southeast Pennsylvania’s maximum-security prison for men. Located in an unassuming classroom down the hall from an impressive collection of classically-acclaimed Matisse and Monet paintings, the works in Faces of Resilience form a corridor of joy, trauma, and discovery.

Many of the works use collage, an art form that highlights multiplicity rather than fragmentation. For the pieces in this show, collage serves as an opportunity to explore the dangers and tragedies of reducing human beings to any one thing, one action, or one circumstance, and to instead encourage a holistic understanding of humanity. Keith Andrews’ Reflection uses the artist’s own court records, inmate profile, and numerous replications of his mug shot as a canvas. Words like “complexion,” “moral culpability,” “offender,” “inmate,” and “legislation” form a mosaic which has defined Andrews’ incarcerated life. Using these materials as a canvas, Andrews paints what is ostensibly a self-portrait: an older, weary-looking man dressed in orange—a color typical to carceral settings—fights to overshadow the mountains of state-determined information that supposedly, through the system’s eyes, define who this person is. 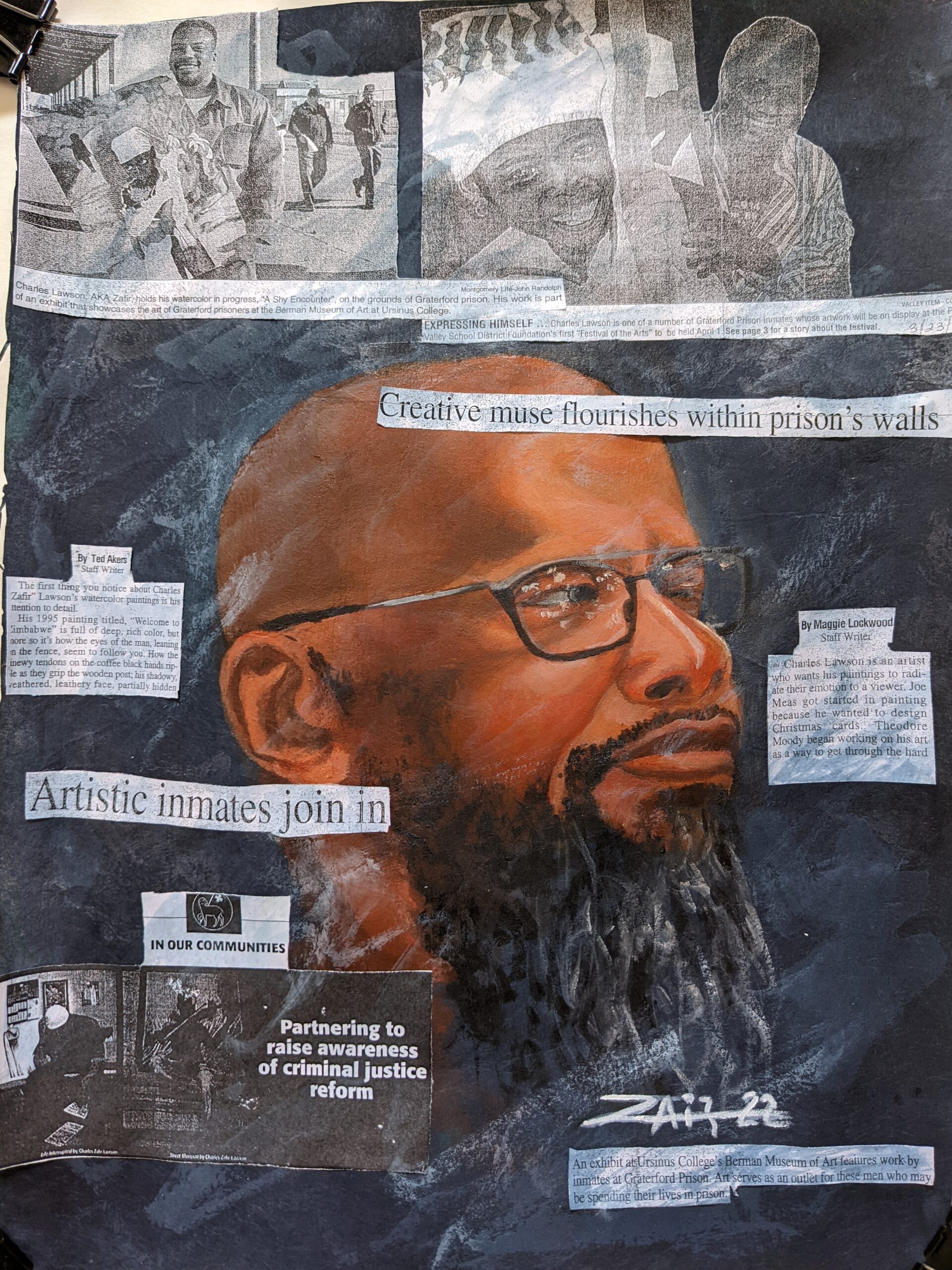 Charles “Zafir” H. Lawson’s The Aging Reformer also features a self-portrait of the artist in profile as the canvas. The portrait is completed with acrylic paint, and collage adds dimension to the piece with paper and parachute cloth. Newspaper clippings that discuss his work overlay the painting—most prominently, “creative muse flourishes within prison’s walls.” In the top left corner, there is a clipping that features the artist as a young man, holding his own painting that had been displayed at the Berman Museum of Art in Ursinus while he was incarcerated at Graterford State Prison.

Zafir and Andrews’ works exist in reflection of one another, and illuminate larger truths about reclaiming one’s own personal narrative—while Andrews’ piece fights to show the person underlying the files and documents, Zafir’s reveals the importance of external framing, and of the dual power and powerlessness of external definition. The words that frame his success are not his own, but reflect his refusal to be defined by the circumstance of incarceration. And as co-founder of Art for Justice, which works to display the artwork of prisoners at public venues and events, Zafir helps others collage their lives with beauty and creation. 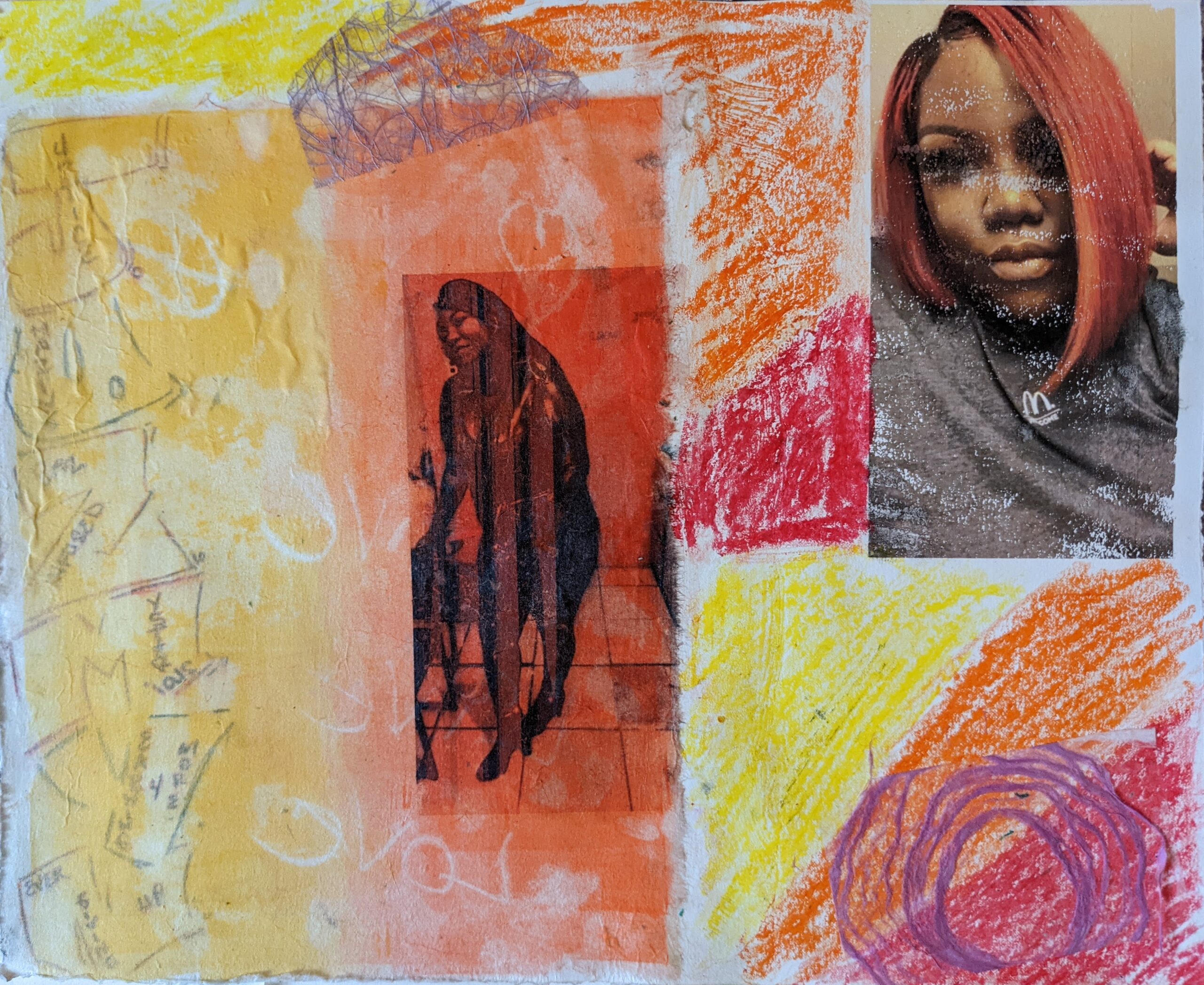 Many of the artists featured in the exhibit—such as Casim Hill, Jada Gardner, and Ishmail Johnson—use photo transfer overlaid with intricate designs and color palettes to assert their own interpretations and definitions of self.  Jazmyn Lawrence used monotype, pencil, paint, and photo transfer for her work, The Creation of Me. Within block letters, reminiscent of the graffiti font that has long been a stylistic staple in Philadelphia, she writes an acrostic of her name along the left side of the piece: J(ustice), A(mazing), Z(eal infused), M(ysterious), Y(earning 4 more), N(ever giving up). On the other side, there are two photos of Lawrence, creating a piece of total self-definition.

Faces of Resilience is a space of reclamation, with the majority of the artists utilizing portraiture in one way or another to redefine their personal narratives that have been swept up by the circumstances of the world. That may be incarceration, the conditions of the pandemic, or any of the myriad challenges we face while navigating a world of complex structures and systems that cannot accommodate the entirety of anyone. The exhibit introduces art as a way to coalesce and release the multiplicities we all contain into something we can call our own, and that can truly reflect our full selves. It implores the viewer to understand the impact of confinement, whether that may be physical, verbal, or emotional, and encourages us to think and create worlds that resist confinement as a necessity.

Free with general admission to the Barnes Foundation, Faces of Resilience will be on view in the first-floor gallery classroom from July 8 through August 22, 2022.

Alexandra Fiorentino-Swinton is an intern with PEN America’s Prison and Justice Writing. She earned a degree in sociology from the University of Chicago in 2022, and spent a year of study at the London School of Economics. In addition to her internship with PEN, she is a freelance writer focused on music culture, youth media, and digital phenomena.